HomeSailingJimmy Cornell tells the story of how he has come to sell...
Sailing 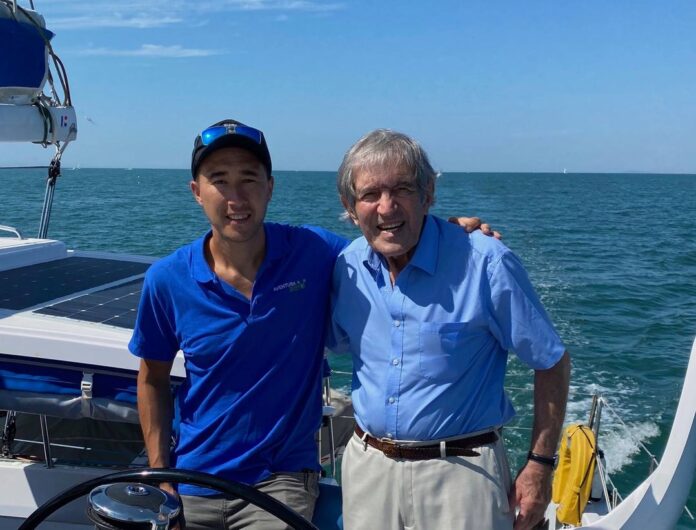 After the decision to postpone my round the world voyage and turn around in Tenerife, we sailed back to the Outremer boatyard in France to carry out some improvements primarily on the regeneration system. I considered this to be essential for the continuation of the voyage.

In early December I returned home to London where I was faced with a prolonged confinement in our apartment due to the coronavirus pandemic. I put this long period of inactivity to good use by updating and revising some of my books and holding online webinars. One day, while walking to an appointment, I suddenly felt dizzy, lost my balance and fell. My head hit the ground, but with my rugby past I didn’t think much of it, and returned home. Later that day, I didn’t feel well and was referred by our family doctor to the nearby Neurosurgery Hospital. I was diagnosed with having suffered a subdural brain haemorrhage. The procedure to drain the blood was successful and I am now fully recovered. But what would have happened if I had continued the voyage and this had occurred in some remote location or more likely on the high seas? Once again, as on many other occasions in my long and eventful life, good fortune had been on my side.

At a follow-up consultation, the neurosurgeon told me that I could return to a normal life and advised me to avoid any stress, whether mental or physical. I mentioned the fact that I had a yacht and was planning to leave on a round the world voyage. He expressed his concern that such an undertaking might be too ambitious and possibly risky. My family expressed the same feeling and asked me to reconsider my plans. In my entire life I have never given up on any of my projects, but I felt that the moment had come to be realistic and follow the consultant’s advice and my family’s wish. Reluctantly I decided to abandon my plans.

I never lose: either I win, or I learn.

Nelson Mandela’s words have been haunting me ever since I took the decision to put my plans on hold. One of the most important things I have learned in my many years of sailing is to resist the temptation to jump to a conclusion before examining all the existing facts. Aventura’s 3600 miles maiden voyage had put Aventura Zero and its concept to a rigorous test, and I am very pleased that we completed each of the offshore passages with zero carbon emissions. On the last leg from Tenerife to France I carefully monitored the systems, keeping a record of both the rate of regeneration and overall electricity consumption. On that ten-day nonstop passage all our electricity needs were covered by onboard regeneration. We left Tenerife with the battery bank at 95% capacity and arrived with 20%, with enough left in the batteries for an emergency. The 1540-mile passage was far from ideal, as we encountered the full range of weather conditions, from calms to two gales with sustained winds of over 40 knots. I can therefore state unequivocally that, based on that experience, the aim of zero carbon footprint on a sailing boat is certainly achievable.

During my absence, some essential improvements have already been implemented by Outremer. The most important was replacing the portside Gori folding propeller with an Oceanvolt ServoProp. There was already such a propeller on the starboard side, but the new one is the latest version and supposed to be more efficient in regeneration mode. Having two of those propellers has doubled the regeneration capacity. This was proved during a three-day offshore test sail carried out in May that showed that Aventura Zero should now be capable of covering all its electricity needs by regeneration.

Among the many questions that I have been asked about the concept of an electric boat was how I felt about switching to a catamaran. I must state unequivocally that having a performance cruising catamaran for this project was certainly right. Aventura Zero’s maiden voyage absolutely proved it. Even in the lightest of winds she managed to maintain a decent speed, which is an essential requirement of the regeneration principle. 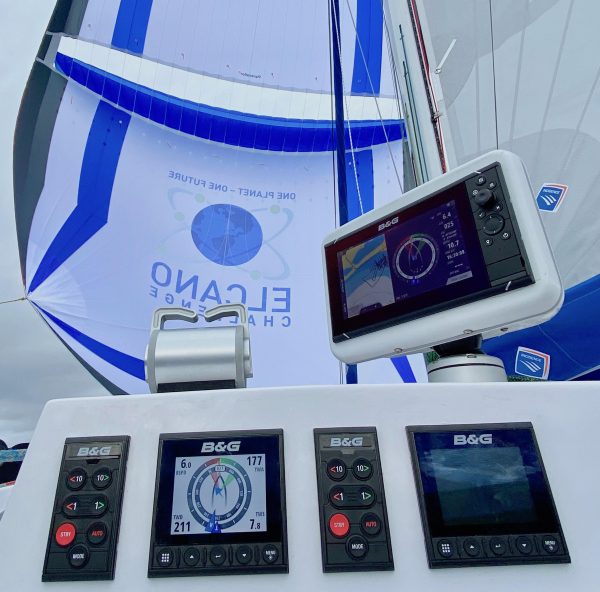 Thanks to the Parasailor Aventura Zero is sailing at 6 knots in 7.8 knots of true wind.

But what earned the admiration of a committed monohull sailor such as myself was her performance in strong winds.

On Aventura Zero’s maiden voyage we had three instances of winds over 40 knots with gusts in the high forties, and on every occasion Aventura Zero behaved impeccably. I must admit that until then I had my concerns about a catamaran’s ability to cope with that kind of wind and sea conditions.

Having witnessed her impressive seaworthiness and stability, I felt absolutely secure and, I must admit, also relieved. This is, I know, a bold statement from a dyed-in-the-wool monohull sailor but I feel that I must say it, as I never imagined that a catamaran would be so stable and easily handled under the conditions we encountered. This is quite clear from this shot of our wake at 12 knots.

All that is now in the past because last week I was contacted by Outremer to inform me that they have a buyer who is interested in using Aventura Zero for his own environmental projects. Malcolm Wood is a passionate environmental film-maker who has been involved in a number of successful film projects such as A Plastic Ocean, described by Sir David Attenborough as “the most important film of our time”. His latest film is The Last Glaciers, which looks at the drastic changes taking place in the mountains due to a warming climate. Malcolm and his team have used paragliders to get previously unseen camera angles to deliver evidence of the climate crisis. Malcolm recently joined the UN Environment Programme, focusing on the effects of climate change, waste and biodiversity loss.

Earlier this week I drove to La Grande Motte, in the south of France, to complete the sale and hand over Aventura Zero. Parting with any of my boats has always been a sad and painful experience. This was even more so in the case of Aventura Zero, as I will always regret not been able to complete my voyage and the opportunity to enjoy sailing more on this wonderful boat. That is a feeling that I have to learn to live with. But at least, by way of compensation, I am pleased to know that Aventura Zero will be part of some meaningful projects in the future. 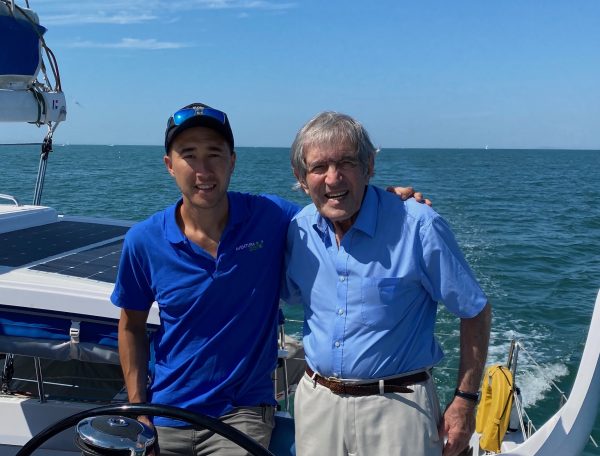 As to Nelson Mandela’s words of wisdom, I have learned a lot from this experience. The future is indeed electric!