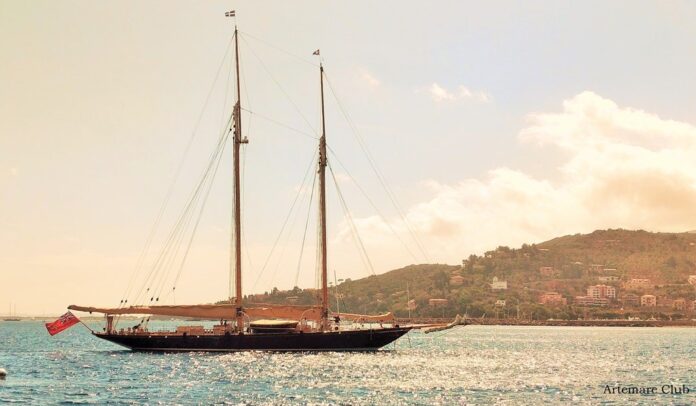 Mariette the big blue steel schooner 32 meters long with her ready crew, the attentive skipper, all the perfect signs ashore assisted in mooring by the talented Maurizio Schiano arrived at the Pilarella quay in Porto Santo Stefano. and by one of his collaborators from Argentario Approdi.

Present for the seafaring welcome of use Artemare Club tells us the story of Mariette, at the beginning of the 20th century Nat Herreshoff Rhode Island, drew data from the America’s Cup schooners to design a series of beautiful boats, fast and elegant for the rich bourgeoisie at the time, Mariette was part of this fleet, together with her twin Vagrant, owned by Harold S. Vanderbilt. Built for Frederick J. Brown in 1915 she was skippered by Jacob F. Brown, in 1927 Mariette changed owners and was sold to Francis B. Crowninshield, who gave her the name of Cleopatra’s Barge II, writer James A. Michener was a regular guest at edge and mentions it in his novel Chesapeake.

After a long period with this shipowner, in the Second World War the boat was requisitioned by the American Navy and used as a coastguard ship, at the end of the conflict it was sold and had several owners and other names and began an inevitable decline that led it to risk the demolition in the Caribbean. The beauty of this steed of the seas did not go unnoticed and at the beginning of the 80s under the name of Janeen, owner Lou Boudreau, it was purchased and brought to Italy by Andrea Rizzoli who kept it until 1990 making it have a first restoration at the Shipyard. Beconcini of La Spezia.

Purchased in 1994 by the American Thomas J. Perkins of San Francisco Mariette returned from the Beconcini Shipyard for the final restoration. He has participated in various Mediterranean regattas and in the Argentario Sailing Week comparing himself with two other large boats already assiduous of the vintage boat circuit, the Mariquita auric cutter of 1911, the only surviving hull of the 19-meter international tonnage class and Cambria of 1928, the only 23 meters international tonnage, still sailing.

These ladies of the sea who choose the Argentario are the testimony of the beauty of the sea and the safety of the landings of the Promontory.

Monaco brings to life The Golden Age of Yachting

Monaco Classic Week is not just a regatta. It’s a voyage through time and the history of yachting which in Monaco combines...
Read more
Classic Yachts

The team of Royal Huisman and Huisfit is honoured to merit the continued trust of Dr. Jim Clark, who commissioned the shipyard...
Read more
- Advertisment -