Doyle meeting the challenge of the custom-made superyacht sails 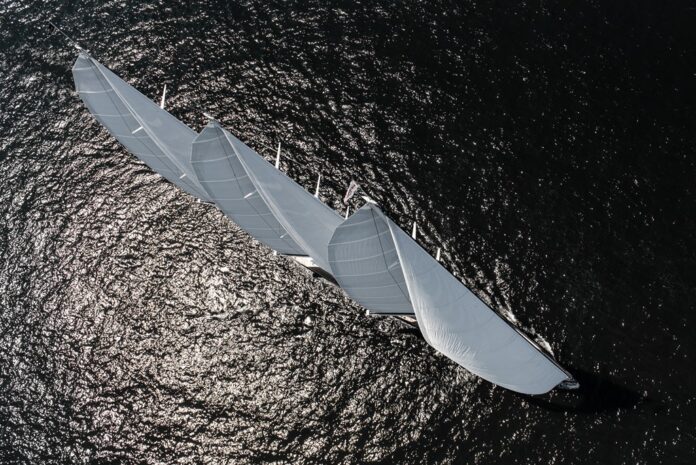 For many sailmakers there is no greater challenge than designing, building and fitting superyacht sails. Exceeding 30m in length and never the same. Each is custom in design and build with unique dimensions and characteristics, professional captains and discerning owners who are making considerable investments into every aspect of their yacht. In a world of mass-production of even luxury goods, the customised quality of superyachts stands out as being unique, a level that Doyle Sails meets routinely not only in Palma but around the world.

Technology within sailmaking continues to strengthen and Doyle Sails is leading the fleet with constant innovation being offered to their clients around the world. The innovation is being driven by having the right people involved with every single project – leading experts in sail design and construction ensure that each sail being delivered is 100 per cent suited to that yacht. With the combined experience of a worldwide group of sailing and sailmaking experts this knowledge is applied to every sail.

Doyle Sails Palma is one of five major Doyle Sails’ superyacht hubs around the world. Managing Director Chris Sherlock partnering with Superyacht Sales Manager and Director Scott Zebny, alongside grand prix expert and Director Luke Molloy offer world class service and new sails to many superyachts from the stunning vista of Palma de Mallorca. The Doyle Sails superyacht network continues to be a force to be reckoned with, and with footholds in many of the world’s most prestigious superyacht hubs including Italy, New Zealand, Newport and the United Kingdom, it is no wonder they continue to grow market share.

Chris Sherlock’s experience is extremely hands-on, his professional sailmaking career is strengthened by spending more than three decades managing high profile maxi and supermaxi campaigns. The most prominent of these was in the long-term employment of the ever-effervescent Mike Slade and his Farr-designed Leopard 3, a 30m canting-keeled racing yacht that was not only a contender for elapsed time records soon after its launch in 2007, but had the added extra of being adaptable for racing and cruising charters as well. Being entered in most of the prestigious ocean racing events on the yachting calendar, the Leopard team always in transit with pressure to remain competitive and reliable to meet not only Slade’s needs, but those of his charter clientele as well.

Similarly, Scott Zebny started working with superyachts some 30 years ago in Fort Lauderdale, and was one of the early pioneers to bring a competitive sailor’s eye to this new and growing superyacht racing scene – coupled with his university degree in aerospace engineering, his attention to detail and understanding of how sails should work delivered exceptional value as well.

‘Prior to joining the Doyle Sails team in 2019, I had been watching the group for a while. I was impressed by their continued investment in the right people and in technology,’ says Zebny. Take, for example, the design and build of sails for the 81m Panamax three-masted schooner Sea Eagle II. Everything about this project could be seen as challenging, but for Doyle Sails it was an opportunity once again to showcase their passion for delivering the best sails available, every time. The mandate was to produce impressive performance and easy sail handling, and with a combined sail area of 3,500m2 across three rigs, it was a yacht that was nothing short of astounding. Each mast has in boom furling mainsails while the aft two have furling staysails which are used when reaching. A large furling Yankee provides the ultimate performance upwind offering a slightly easier set up when off the wind, made easier by sheeting to the same point when reefed.

Zebny continues, ‘I joined Doyle when this project was already well underway, but I was immediately impressed at how well their design team had collaborated with all parties – the designers at Dykstra Naval Architects and Mark Whiteley Design, the boatbuilders at Royal Huisman, the sparmakers at Rondal, the carbon batten suppliers at CTech. After taking three days to load the battens and the sails, on our first sea trial the sails went up without a hitch and looked amazing: the luff curve matched the spar bend perfectly, and the full-length batten systems were extremely wellmatched for the loads and presented no issues going up or down.

‘Also, the use of Structured Luff headsails and staysails meant the halyard loads were reduced to seven tons on a 2:1 system, as measured by a load pin,’ says Zebny. ‘Load sensors are on all the systems because there are particular sail load combinations needed on Sea Eagle II for the spar and standing rigging systems to maintain their integrity at their designed weight and strength. The sail systems need to be perfect to work effectively within these constraints as the owner travels the world, recently the owner has taken the boat across the Pacific Ocean to Tahiti and then to New Zealand with no issues in the sail systems.’

Another notable project is the new Baltic 68 Café Racer, a high-profile project that is turning heads not only with clever design and style innovations, but with its strong emphasis on use of environmentally sustainable technologies in the build and outfit of this ultra-modern day yacht. Here Zebny is working with the Doyle design team, designer Javier Jaudenes and sparmaker Marstrom.

‘This is an interesting boat: a high-performance luxury daysailer that places a high importance on sail handling,’ says Zebny. ‘The rig has no backstays, no runners and a very low angle spreader sweep, so this is the perfect application of a Structured Luff headsail to minimise headstay sag without resorting to massive rig loads.’

Model calculations indicate mast jack pressure is reduced by 40 per cent, and the headstay load by 30 per cent, with the reduction in sag adding not only more efficiency to the flying shape, but two to three per cent more effective sail area as well. Running this through the VPP suggests thrust gains of up to two per cent. Ultimately it means less load, less weight and more luff projection forward, so more power (read speed)’.

Luke Molloy joined the Doyle team after completing the 2017-18 Volvo Ocean Race with Team Akzo Nobel as helmsman/trimmer and in charge of the sail programme. Luke continues to have active roles across a large number of Grand Prix programmes offering incredible value and relevance to all of his projects.

A true testament to this value is with the recently launched Botin 56 Black Pearl, a performance orientated offshore boat built at King Marine in Valencia where Molloy had been involved with the project discussions from their inception. With a sailmaker of this calibre included at an early stage and the Doyle Structured Luff technology, it allowed for performance improvements and a reduction in loads in the construction of the yacht, a concept that has been adopted by some of the world’s most prestigious naval architects.

‘I’ve raced on the previous Black Pearl, a Carkeek 47, and the team was impressed with the Doyle Cableless Code 0 and A3 sails that we delivered,’ says Molloy. ‘Being involved early gave us the ability to work with Botin Partners on deck layout options, as well as with the sparmakers at Southern Spars on the deck-stepped rig design, with Carbo- Link for the standing rigging, to optimise all features in these systems and collaborate this into our sail design. The sail selection for Black Pearl includes flying headsails and spinnakers geared towards leaving no gaps throughout the wind spectrum.’

Sherlock, Zebny and Molloy are part of a 16-strong team at Doyle Palma’s new 3000m2 facility just north of Palma in Marratxi, where at this size they are able to handle not only the assembly and servicing of superyacht sails, but also accommodate any requirements from their grand prix customers as well. Doyle Sails’ dedication to their client’s needs is complete, offering full service for the life of their sails: not only assembly and servicing, but also an eco-friendly laundry for washing sails and cordage and use of climate-controlled storage facilities to ensure sails are not damaged when not used. Even when their lives propelling boats are finished, Doyle Palma helps find re-purposed use of all that high-tech sail cloth into sailing-related accessories.

‘While my role since joining the team has been focused on sales,’ says Zebny, ‘being here in Palma at our new facility has reinvigorated my passion for seeing the elements of sailmaking come together under one roof to create sails for these magnificent yachts. We have a single-minded focus to put our clients’ needs first, and at this facility we can achieve this goal.’