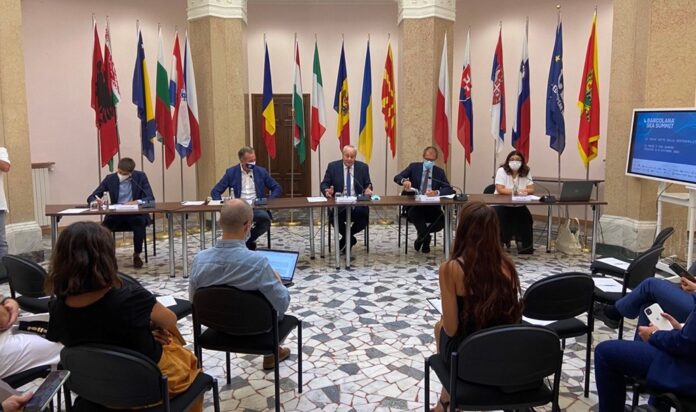 The state of the Mediterranean; the role of science diplomacy in supporting innovative and integrated policies for the  protection of the sea; the nautical circular economy; the future of Port-Cities with a view to the ecological transition thanks to the economic impetus of the Recovery Plan; the key role of Trieste in international relations with Mitteleuropa and the InCE Countries; and, on an environmental front also, the central role of companies in implementing sustainability policies: such are the topics for the Barcolana Sea Summit, an event of scientific dissemination and in-depth political, economic and social study dedicated to the sustainability of the sea and aquatic eco-systems, organized for its first edition as part of the Barcolana (the largest regatta in the world, now in its 53rd edition), to be held from the 6th to the 9th of October 2021, in Trieste.

“We asked ourselves what the state of health of the Mediterranean Sea is today, and how it will evolve over the next ten years. The answer will necessarily come from multiple sources, such as scientists, representatives of institutions, businessmen, environmental associations, those who navigate the sea, and those who draw direct sustenance from it. Only from all these voices, in fact, can we obtain an exhaustive reply, because the sea belongs to everyone and, above all, it is for ever” – so explains the chairman of the Società Velica di Barcola e Grignano, Mitja Gialuz, who organizes the Barcolana and the first edition of the Barcolana Sea Summit.

The Barcolana Sea Summit recounts and deals extensively with the Mediterranean, giving a voice to those who study it, protect it, work with it and invest in it, so that the need to protect it is increasingly evident and urgent. The message of the first edition of the Barcolana Sea Summit is clear in its content but equally as challenging in its execution. When one talks of the sea, everyone can do something to protect it, and the multilateral collaboration among institutions, companies and academies, together with the support of civil society, is indispensable.

“The pandemic has transformed the rapport man had with Nature – continues Gialuz – the new generations have argued strongly about it over the last few years and now it is getting clearer and clearer that time is running out. Together we must all identify a new route, able to guarantee a future, generate innovation and open up new possibilities. We believe that the ecological transition must start from the Mediterranean Sea itself, and the Barcolana Sea Summit aims to be a place open to in-depth analysis and discussion between different people, so as to clarify the details of this new route and to take concrete commitments for the near future.”

To inaugurate this first edition of the Barcolana Sea Summit, on Wednesday October 6th, there will be Roberto Cingolani, Minister for Ecological Transition, with a speech that will connect the health of the sea to the policies for environmental transition.

Andrea Illy – Co-chairman of the Regenerative Society Foundation, together with Edo Ronchi, erstwhile Minister of the Environment and Chairman of the Fondazione per lo Sviluppo Sostenibile, will outline the course of action and the route to be followed, which will inevitably not only go towards the protection and the conservation of the sea, but also towards the regeneration of its natural capital.

It will therefore be up to the local institutions – in particular to the Environment Department of the FVG Region – to give an overview of the activities and commitments regarding the Adriatic, a sea that is closed off geographically but open and interconnected in terms of international relations and policies.

Thursday October 7th will be dedicated to the directions science will take, its diplomacy for the sea, and to the role companies will assume in the development of sustainable projects, thereby defining a framework for action that begins with the analysis of scientific data to enable the development of projects to protect the sea on a European basis, and encourage the actions of companies. On the scientific front, the speeches by the Rector of the Università di Trieste, the Ogs and the Chairman of ISPRA, will trace the outline of the general picture, whereas it will up to the scientists of ISPRA, OGS, CNR, explorers and researchers, to give a more detailed view of the state of health of the Mediterranean Sea. Next up, the voice of the business world: from sustainability initiatives to the “blue professions” of the future, the role of companies is fundamental for the protection of the sea. In this context, Generali, Coop Italia, illy, Siram-Veolia, Unicredit, Gruppo Hera, Gruppo Devines will present their activities for the protection, conservation and regeneration of the sea and the aquatic eco-systems.

Thanks to the presence of Pascal Lamy, the afternoon will be dedicated to science diplomacy and the role of Stella di Mare, the Mission of the European commission for the protection of seas and oceans. Two women will then talk about the projects for the sea of the big international associations and organizations: Francesca Santoro, specialist of the Ocean Literacy program and member of the Commissione Oceanografica Intergovernativa dell’UNESCO, will talk about the Ocean Decade project, the ten-year period of the sea for sustainable development, whereas Donatella Bianchi, Chairman of WWF Italia, will render the framework of action of the association which has always worked for the protection of natural ecosystems. To close the day, the minister of the Politiche Agricole Alimentari e Forestali e della Pesca, Stefano Patuanelli, with a round table’s conclusions, will talk about the future of fishing and fish farms.

The morning of Friday October 9th will be dedicated to “Green Ports, Green Cities”, namely the subject of the evolution of port cities and their development brought about in Italy by the funds of the Recovery Plan. The speech of the Ministro delle Infrastrutture e della Mobilità Sostenibili, Enrico Giovannini, will start off the day, to be followed by an in-depth analysis by the Undersecretary of the Ministry of Ecological Transition, Vannia Gava, and her director Laura d’Aprile. The city planner of the Massachussetts Institute of Technology (MIT) of Boston, Marie Ann Ocampo, will introduce an observation regarding the urban planning of the port cities in eco-friendly terms and, following that, an in-depth look – strictly linked to the ports of Trieste and Genova – at the topic of the electrification of the docks and the development of sustainable fuels. The word will then pass to the shipping owners and the industrial players engaged in the Research&Development of these strategic sectors.

It will be the chairman of Generali, Gabriele Galateri di Genola, to conclude the day’s events, to reiterate the historical support of the group towards the Barcolana and its activities, but above all to tell of its dedication to environmental and social sustainability issues, with a specific focus on gender equality and female empowerment.

The afternoon of Friday October 9th will have as protagonists the institutions of the Countries that will participate in the CEI – Central European Initiative. The Barcolana Sea Summit will in fact host the INCE Summit “Water without Borders”, the meeting between the Ministers for the Environment and their delegates of the 17 Countries of Central Europe. After a private session dedicated to waste management, the representatives of the INCE Countries will meet the public of the Barcolana Sea Summit to compose together a map of actions and regulations to protect the coastal environment and rivers of their respective Countries: a positive cross-section of the actions undertaken and planned at an international level to protect the eastern Mediterranean coasts and the rivers that flow into it, in order to increase awareness that seas and rivers do not have geo-political borders.

The event will take place in Trieste (on the 13th September it will be possible to make a reservation via a digital platform connected to the websites www.seasummit.it and www.barcolana.it) and on streaming on the YouTube channel of barcolana.it.)