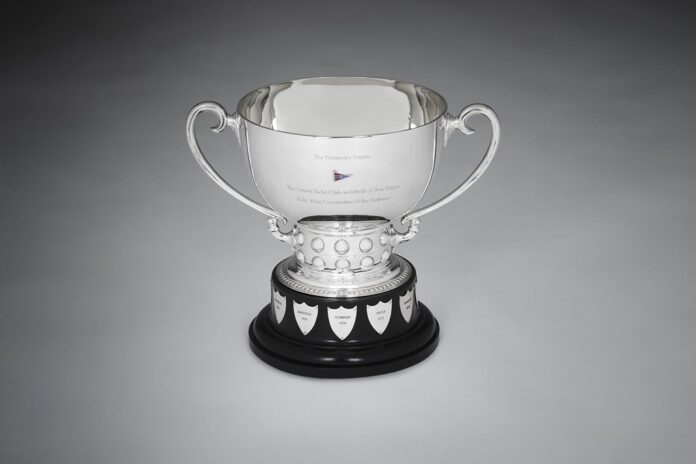 In a week’s time, on Thursday 30th September, the most beautiful centenarian yachts will meet in Saint-Tropez for the 10th edition of the Gstaad Yacht Club Centenary Trophy. Once again, these magnificent boats will elegantly unfurl their huge sails for this elegant, magical and unique regatta.

To celebrate this anniversary edition, 22 yachts are expected on the starting line of the event organized, since its inception during the Voiles by the Gstaad Yacht Club, in co-operation with the Société Nautique de Saint Tropez, and dedicated to the most beautiful boats of one hundred years or more.
Indeed, it was in 2011 that the Gstaad Yacht Club launched the idea of bringing together in the Mediterranean boats 100 years of age. Over the years, the most stunning yachts from the last century, and the most successful, have come to the Cote d’Azur to join “their” regatta. The race has a “pursuit race” format with staggered starts -the boats cross the starting line according to their rating, the first to cross the finishing line is declared the winner- a format that enables the most diverse yachts to compete on equal terms.

“The Centenary Trophy, I love the chase-race format, it’s very cool and easy to understand for the spectators! This is the second time Eva and I have taken part, so I’m really excited to be here for the anniversary edition. On board Eva, we have a mixed crew, we like challenges and we will do everything to cross the finish line first!” Confides Charlotte Franquet, Eva’s boat captain, who will be in good company, as far as female sailors are concerned, with Swiss Elodie Mettraux at the helm of Fife Sumurun.

“It is really fantastic to welcome, for this anniversary edition, yacht that are loyal and familiar with our event but also new boats that will be competing for the first time or that are coming back after several years of absence. I hope that everyone will fall in love with our regatta and enjoy the day out on the water to try and win the Trophy.” Explains Manrico Iachia, Commodore of the Gstaad Yacht Club,

Since 2011, this format has proven to be very popular with both the sailors and the public, who come in large numbers to admire the beautiful boats crossing the line just off the harbor.

The 10th edition of the Gstaad Yacht Club Centenary Trophy is scheduled for Thursday, the day traditionally dedicated to the “Challenges” at Les Voiles de Saint Tropez.

The Trophy, awarded every year, is also centenary, as it was created by Wakely and Wheeler in London in 1911, exactly 100 years before the first edition of the regatta.

Rendezvous on Thursday 30th September 2021 when prestige, elegance and excellence will once again write a beautiful page of history, for the 10th edition of the Centenary Trophy.