Home Events Regatta The Spanish team clinched a fine win in the 2nd race of...
EventsRegatta 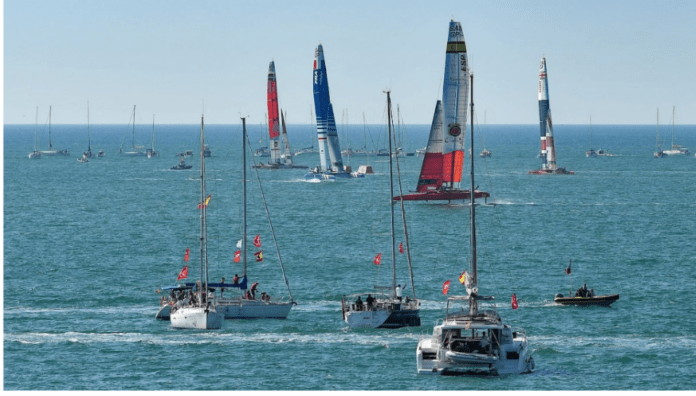 On a momentous day for SailGP, as we also raced with six athletes onboard our F50s for the first time ever, the Spanish team clinched a fine win in the second race of the day, crossing the finish line to wild cheers and some iconic Spanish-language commentary which is sure to go down in history.

Great Britain had earlier claimed the opening win of the SpainSGP, before the United States rounded out the day with the final victory on the Bay of Cadiz, aided by SailGP’s youngest athlete, CJ Perez, the 18-year-old who played a key role on her debut in the global sailing league.

Australia ended Race Day 1 topping the leaderboard, with Jimmy Spithill’s US team and an impressive Denmark rounding out the top three heading into Sunday’s two fleet races. Spain, despite winning the second race, ended the day down in sixth place.

With the 29 meter wing utilised and six crew onboard each F50, there was always going to be drama in Cadiz – and it began as soon as the opening race

An extremely tight battle between the Aussies and Great Britain at the front of the pack was decided by a photo finish, with Ben Ainslie’s team crossing the finish line mere milliseconds earlier than their rivals in the Flying Roo.

The first race bore little fruit for Spain, who looked set to struggle on home waters with a disappointing seventh place finish.

But Phil Robertson and his team turned it on when the second race got under way, powering to a commanding win ahead of Japan and Denmark to make their mark on their home event – and lead to this iconic piece of television.

The Spanish dropped back down the fleet during the third race, as light winds meant the 15-minute time limit expired with only a single team – the United States – having crossed the finish line. In this situation, final rankings are determined by a boat’s position at the previous mark, meaning Spain were awarded a fifth place finish.

Denmark claimed a second successive third place in the final race of the day to stake their claim for a place in Sunday’s winner-takes-all Final, but it is Australia who head into Race Day 2’s action leading the pack.