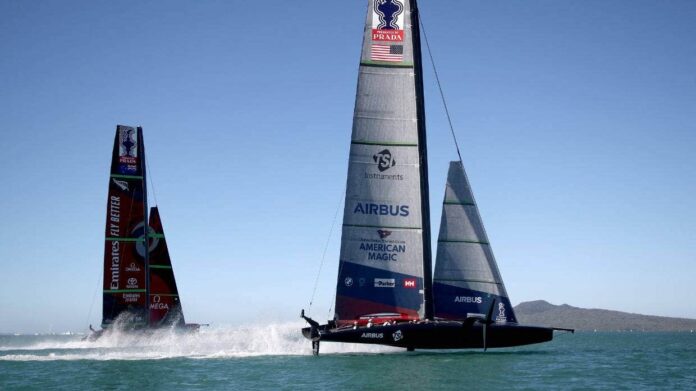 American Magic have backed the latest big moves in the America’s Cup and are burying themselves in design work for another challenge for the Auld Mug.

The United States team were the hard luck story of Auckland 2021 when their highly competitive boat capsized at high speed, suffering severe damage that eventually saw them be the first team eliminated.

But it seems they are back for more, encouraged by their early analysis of the new protocol and class rule released last week by defender Team New Zealand and challenger of record Britannia.

“Our team plans to compete at AC37, and as part of that process we continue to learn as much about the next event as we can,” Doug DeVos, American Magic co-founder and team principal said.

“The big-picture goals outlined in this protocol, in terms of helping the America’s Cup as an event gain teams, raise visibility, improve racing, create more diversity, include female sailors, and increase sustainability, are goals that American Magic absolutely supports.”

American Magic have yet to name a backing yacht club after they were surprisingly dumped by the New York Yacht Club, who went in favour of start-up syndicate Stars + Stripes. The famous club then decided to withdraw from this 37th edition of the Cup.

American Magic skipper Terry Hutchinson revealed they had already laid much of the groundwork for their next challenge and the release of the crucial documents was now allowing them to add vital detail.

“There is a lot about the documents that we like already,” Hutchinson said.

“But all together this is roughly 200 pages of info, and we are still digging into it.

“We are also keeping an open mind about some of the more ambitious aspects of the plan put forward by ETNZ and INEOS. We want AC37 to be a competitive, successful event, and we hope all the teams can work together to make that happen.”

American Magic’s new design boss, two-time Cup winner Scott Ferguson, likes the light-air development of the radical foiling monohull in the new rules after the boats were exposed in this key wind window on their first outings in Auckland.

“We had been given a heads up by ETNZ and INEOS on most of the anticipated changes in the AC75 class rule, so there are no huge surprises,” Ferguson said.

“The first order of business is checking it against the AC36 version of the rule, and then really digging into the new wording. The designers will review the aspects of the Rule related to their individual areas of expertise, and work will begin to explore the revised design space.

“One of the shortcomings of the AC75 class was racing in light air. The rule changes have addressed this by expanding the foil span box by 12.5 per cent and reducing the weight of the boat by about 11 per cent. Both changes are key to improving light air performance.”

American Magic were the only team to beat Team New Zealand during last December’s Christmas Cup warm-up regatta. They were acknowledged as having genuine speed and were trouncing Luna Rossa before the capsize disaster.

American Magic’s positivity is encouraging. Having taking the bold step of entering Auckland 2021, there is clearly a desire work from those foundations, realising the America’s Cup is a long game that requires investment over consecutive cycles.

The intrigue now is to see who else will jump on board.

There has been ominous silence from Italy’s Luna Rossa, the dumped challenger of record from Auckland who were beaten 7-3 by Team New Zealand in The Match.

The touted return of Swiss syndicate Alinghi, who won in 2003 and 2007, is yet to surface.

The Protocol of the 37th America’s Cup was released today by the Defender, the Royal New Zealand Yacht Squadron and Emirates Team...
Read more
America's Cup

Just under four months after announcing that they had jettisoned American Magic, their team from the 36th America's Cup, New York Yacht...
Read more
- Advertisment -