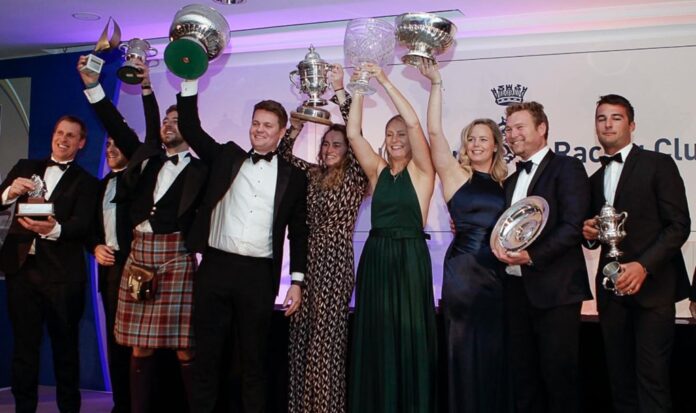 The 2021 Royal Ocean Racing Club Annual Dinner and Prize Giving was held to celebrate a spectacular season of racing. Dubbed the RORC Oscars, over 300 attendees enjoyed a cocktail reception and a three-course gourmet dinner. A glittering array of prestigious prizes were presented to the season’s winners in The Ballroom of the 5-Star InterContinental London Park Lane.

More than 4,000 sailors from around the world, racing in a dazzling variety of 400 boats, took part in the 2021 RORC Season’s Points Championship. The world’s largest offshore racing series comprised 11 testing races, each with its own coveted prizes.

During dinner, the main stage lit up for the awards ceremony and RORC CEO Jeremy Wilton introduced guest speaker and RORC member Pip Hare to the stage. Pip’s Imoca 60 Medallia was also one of the winners, being awarded the Dennis P Miller Memorial Trophy for the best British Overseas Yacht. A magnificent result in the 2020-2021 Vendée Globe, saw Pip become the first British skipper to finish the premier solo round the world race. Pip’s 20-minute presentation was warmly received by the RORC members and guests.

“Getting to the start line of the Vendée Globe is the most difficult goal of all and I have many people in this Club to say a big thank you for getting me there,” commented Hare.

Sunrise win IRC Overall + Yacht of the Year 2021
RORC Commodore James Neville, assisted by RORC Racing Manager Chris Stone, welcomed the trophy winners to the stage; each one receiving tumultuous applause from the audience. There was a standing ovation for the overall winner of the 2021 RORC Season’s Points Championship, Tom Kneen’s JPK 1180 Sunrise. The team received a huge haul of prizes including the Jazz Trophy for winning IRC Overall and the Somerset Memorial Trophy for RORC Yacht of the Year.

Sunrise’s victorious season is unprecedented in the 21-year history of the Championship. Winning the RORC Season’s Points Championship by 133 points, including overall wins under IRC in the East Coast Race and the Morgan Cup. The zenith of Sunrise’s success came when Tom Kneen became the first British skipper to win the Rolex Fastnet Race since 2003.

“This really is unbelievable,” commented Tom Kneen after collecting all the silverware at the RORC Annual Dinner and prizegiving for the the winners in the 2021 RORC Season’s Points Championship. “Sunrise is a very unique group of people that has done something quite astonishing. © Paul Wyeth

“This really is unbelievable,” commented Kneen. “The Sunrise team is a very unique group of people that has done something quite astonishing. Collecting all this silverware in front of this special crowd makes you start to comprehend what we have achieved. The reality is that this will not sink in for a while. This season is beyond our dreams; everything went really well for us and you have to be lucky as well as good. I think we have proven that you don’t need to be wealthy as we are a fairly small budget boat with a young crew. This achievement is through hard work and commitment. Our biggest challenge right now is to keep it going and it is very hard to imagine what next. We can do amazing things with this team and the platform we have created.”

Tala win IRC Zero Overall
Retaining the Europeans Cup for the best yacht in IRC Zero was David Collins’ Botin IRC 52 Tala. A fantastic season included winning IRC Zero for the Rolex Fastnet Race. Tala left the UK at the start of November and sailed to Puerto Calero, Lanzarote for the start of the 2022 RORC Transatlantic Race. The 3,000 nautical mile race across the Atlantic Ocean to Camper and Nicholsons’ Port Louis Marina, Grenada starts on 8th January 2022 with a record entry of world-class boats.

“We have been improving Tala after every race; she is now a lot dryer than she was!” commented Collins. “Tala has the capability to win races, sending this boat is huge fun and we hope to get that opportunity. When it gets really gnarly, we know we will need to preserve the boat. Nobody in the team is under any illusions, we are taking a racing car rallying. I have never raced across the Atlantic before and if we get the tradewinds and all goes well we should finish in under 10 days.”

A fantastic season for David Collins’ team onboard his Botin IRC 52, Tala, winning the Europeans Cup for IRC Zero overall in the Season’s Points Championship and taking home two Assuage Tankards for their performance in the Myth of Malham and Castle Rock Race © Rich Bowen Photography

“I love sailing with Deb and it is really good to win this year, especially as we couldn’t sail last year with the pandemic. We have been building on what we have done for many years and this is the first time we have won IRC Three. Given the quality of the fleet this year, that is very special,” commented Craigie.
RORC Admiral Mike Greville also presented a special award to Eddie Warden Owen, marking the finale of 12 years at the helm of the Royal Ocean Racing Club as Chief Executive Officer. Eddie was awarded life membership of the Club and a gift of a special dossier of his articles produced for Seahorse Magazine.

After the prize giving, guests partied to a live set from rock and pop cover band 4 to the Floor. The 2021 Royal Ocean Racing Club Annual Dinner and Prize Giving was generously supported by Louis Roederer Champagne and William Grant & Sons Distillers.

Deb Fish added that many younger teams are coming into the IRC Two-Handed Class: “Many of the younger sailors come from a dinghy background and that is scary for us because they can get to a good standard very quickly. They have the advantage of youth where they don’t get as tired doing 60 tacks. Once they get the experience, they become a very potent force.”