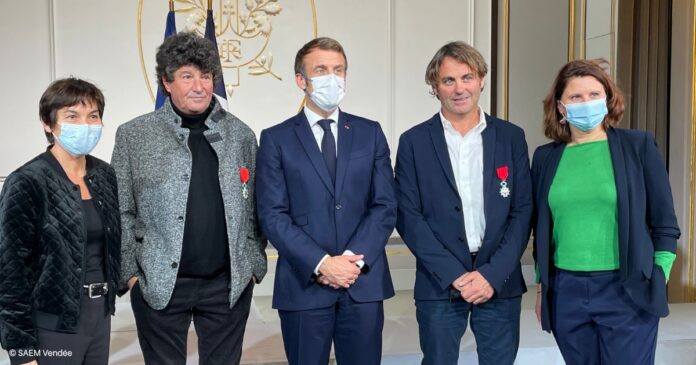 Last night, two heroes were honored for their bravery, courage and talent: Yannick Bestaven, Vendée Globe winner and Jean Le Cam, Kevin Escoffier’s rescuer. Received at the Elysee Palace in the company of all the sailors of the Vendée Globe, they received the badge of the Legion of Honor from the hands of Emmanuel Macron, in the presence of Bérangère Soulard, vice-president of the Department of Vendée in charge of sports.

A year and 5 days ago, Jean Le Cam picked up the castaway Kevin Escoffier aboard Yes We Cam! after 11 hours of research in the southwest of the Cape of Good Hope. Yannick Bestaven was also one of the competitors diverted by the Race Direction to help the PRB skipper. And it was he who, two months later, won the day at the finish line.

The two men who left their mark on the 9 th edition of the Vendée Globe are now the Knights of the Legion of Honor, after a ceremony held Monday night at the Elysee Palace, in which the President of the Republic paid them tribute at length.

On the occasion of the 61st Salone Nautico in Genoa, Swan Shadow has been awarded, in the Superboat category, above 10 meters,...
Read more
Awards