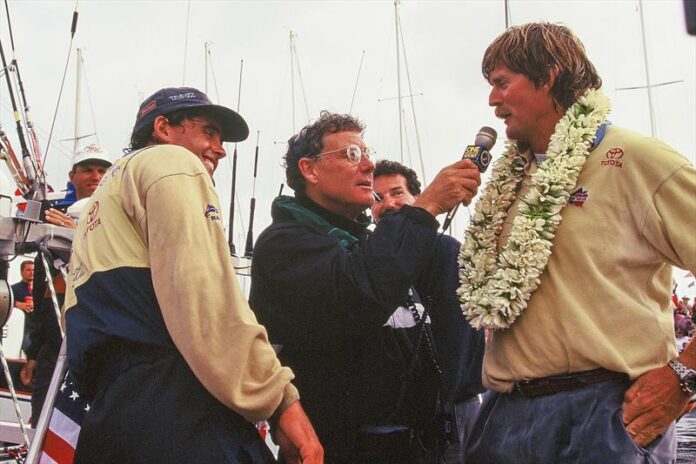 December 5 marked the 20th anniversary of the death of Sir Peter Blake, aged 53yrs, in Macapá, Brazil, following an armed robbery on board the Blake Expeditions yacht “Seamaster”.

In the final chapter of his book “Sir Peter Blake – An Amazing Life”, author and long-time Blake associate Alan Sefton presented several tributes to the “outstanding yachtsman/adventurer of his time”, which are republished with kind permission of the author.

Journalist Bob Fisher recalls the very moving experience when ENZA New Zealand finished her successful 1994 Trophee Jules Verne attempt in Brest: “The welcome to a non-Frenchman was so emotional.”

That was because Blakey actually captured French hearts, something that is bloody difficult to do if you are not French.

“I was in France some weeks after Peter’s death, and they were still in shock – six weeks to two months later. He was definitely one of their heroes – they could identify with him.”

Of Blake’s accomplishments, Fisher says: “There may never be a man so consummately good. To have won the Whitbread, to have held the Trophee Jules Verne and to win the America’s Cup- all at the same time – that’s really something.”

“For the majority of people, just competing in a Fastnet or a Hobart is a personal Everest, but they were mere foothills for Peter, the starting blocks on the way to much loftier peaks.”

“His achievements were second to none. Nobody has achieved what he did, and nor are they likely to do so in the future. He was a 100 per cent, flat-out racer, but he was also a seaman.”

“Being a seaman is so important. There are times when the chips are firmly down, when there are racers, and there are seamen, and the seamen are the ones who come out on top. Blakey was the best. Nobody else could compare. He was a complete yachtsman who appreciated the total game better than anyone, and he was inspirational.”

Sir Douglas Myers, who through his company Lion Breweries, was a long-time backer of Blake’s sailing projects starting with the 1985/86 Whitbread Round the World race with Lion New Zealand and continuing in the next race with Steinlager 2, the only boat to have won every leg of the fully crewed round the world race, now in its 14th rendition. Steinlager was also a backer of Blake’s three America’s Cup campaigns.

When Douglas Myers reflects on Blake’s life, there is an almost inevitable reference to New Zealand’s other great adventurer son – Sir Edmund Hillary:

“Probably Blake and Hillary would be the two names to come forward if you asked people to think about New Zealand. They both achieved great things for their country.”

“l wouldn’t want to have to compare the two, [but] Hillary conquering Everest was probably more visible at the time on a world basis, and he’s been a great ambassador for the country. [Whereas] Peter’s legacy is showing New Zealanders that they are capable of being successful internationally in complex undertakings, of winning with complexity. The impact of that on New Zealanders, and the resulting benefits to the country, might be the greater.”

“He showed us that if you are tenacious and extraordinarily hardworking, and have self-belief, you can pull something together for New Zealand.”

“Pete’s legacy is that for 20 years, he served up a menu of nothing but good news. That’s why I was so outraged by all that crap at the end [of the 2000 America’s Cup defence], because he had such a clean record of excellence – as a human being, as a generous person, as a leader, as a winner.”

Martin Foster is a long time Blake family friend and a “co-conspirator” on several sailing projects, including the Two-man Round the North Island Race and the Ceramaco New Zealand entry in the 1981/82 Whitbread Round the World Race.

“At 53, he’d accomplished so much,” Foster remarked in the Blake biography. “There was so much more to do, but he had achieved one hell of a lot.”

Syroco's "Moonshot I" combines technology in an innovative way that extends beyond speed and into lowering the world's carbon footprint.
Read more
Sailing

The IMA works closely with many yacht clubs and race organizers around the world who run racing for maxi yachts. In the...
Read more
Sailing

Following on from their multi-event Mediterranean Inshore and Offshore Challenges, the International Maxi Association (IMA) is to hold its first series in...
Read more
Sailing

The GLY World Odyssey 500 fleet arrived in Seville earlier this week in preparation for the start of this round the world rally on...
Read more
Sailing

British sailor Jimmy Cornell received an award for outstanding services related to National Defence on Friday by the Spanish Armada in the...
Read more
Sailing

Genesis of a maxi foiler that is reductive to define futuristic. Pressmare.it talked about it with the project managers at the Monaco Yacht...
Read more
- Advertisment -