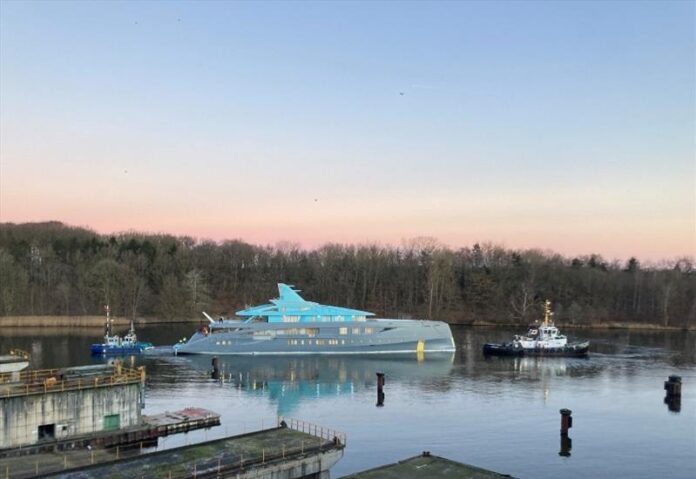 Her striking design makes “Black Shark” one of the most interesting superyacht projects at present. Nobiskrug and the Owner have now signed the contract for the continued construction of the vessel (new build project 793).

With the third order since the economic restart the Rendsburg shipyard stays on its successful course since the takeover by Tennor Group. Investor Lars Windhorst, who was significantly involved in the negotiations for the “Black Shark”, emphasizes that this success is proof of Nobiskrug’s capabilities. The current order book thus significantly contributes to the new orientation of the shipyard.

“In intensive negotiations we prevailed against strong competitors and proved that we are the best partner for our customer. The fact that we were able to renew the contract for the construction of this outstanding ship makes me very proud on behalf of the employees of the shipyard,” says Philipp Maracke, Managing Director of Nobiskrug. The construction of the superyacht will be completed at the shipyard in Rendsburg.

In summer 2023, M/Y “Black Shark” will be handed over to her Owner, who wishes to remain unnamed. Imperial Yachts acts as broker and Owner’s representative.

The “Black Shark” is already awaiting its completion in the superyacht building shed, Nobiskrug’s 160-metre long covered and air-conditioned dry dock. Under controlled conditions the interior and exterior outfitting will be finalised. This includes, among other tasks, the pulling of cables, pipe works, as well as the installation of insulation and the air conditioning and ventilation systems. Subsequently, the luxury interior and the installation of electrical components, such as lighting and entertainment systems, will be completed.

At the same time, the filling and fairing work on the hull will be completed, before the innovative matt black paint is applied in several layers, and windows and doors are installed.

The 77-metre yacht has a distinctive reverse bow (also known as a negative stern). With a mast reminiscent of a shark’s fin fitted on a silver metallic superstructure, it has a uniquely characteristic silhouette. At the same time, the matt paintwork of the hull mimics the skin texture of a black shark. The yacht has five decks, a large spa area and whirlpool as well as two tender boats.

The dynamic, imposing exterior of the ship was designed by the renowned studio Winch Design in London. The interior design has been created by Sinot Yacht Architecture & Design from the Netherlands.

The “Black Shark” is being built in compliance with IMO Tier 3 regulations, which set strict emission limits, as well as the Red Ensign Group Yacht Code Part A.