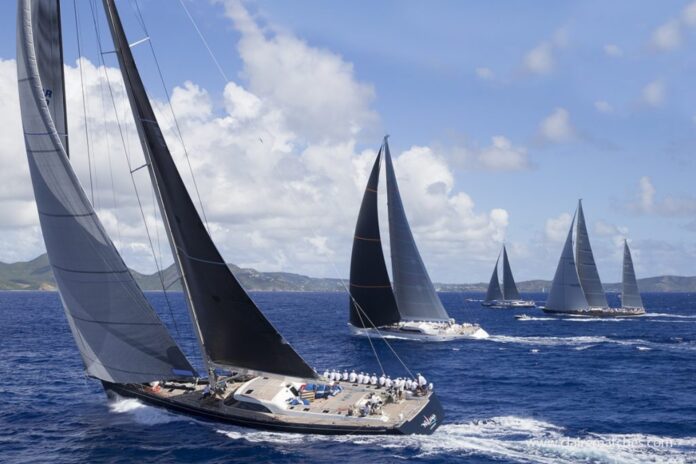 The 121ft Dyksra sloop Action, will be skippered by Josh Gilchrist. Returning after their debut in 2020. Action was built at the Royal Huisman Shipyard in the Netherlands. Action features naval design by Dykstra Naval Architects with an interior created by Rhoades Young.

The 102ft Southern Wind sloop Farfalla, with Sam Laidlaw at the helm, will be skippered by Richard Chadburn. This will be Farfalla’s debut at the Superyacht Challenge Antigua. Built by the South African shipyard, Southern Wind and from the drawing board of Farr Yacht Design.

The German Frers Designed Swan 90 Freya will be skippered by Joph Carter. This will be Freya’s third regatta having made the podium in 2014 and 2016. Built by Nautor’s Swan in Finland, Freya is familiar sight on the East Coast of the USA and in the Caribbean.

The 218ft Dykstra/Reichel Pugh ketch Hetairos, is skippered by Graham Newton, and will be making their debut this year. Despite her classic looks with a plumb stem and sweeping counter, she is a thoroughly modern high-performance yacht built in carbon composite by Baltic Yachts.

The J-Class Hanuman is a 138ft sloop designed by Charles E. Nicholson, skippered by Josh Luckhurst, and will be making their debut this year. Hanuman is a regular on the regatta circuit and is one of the most successful winning J-Class yachts on the water. Built by Royal Huisman shipyard in the Netherlands.

The 180ft Dykstra ketch Kamaxitha, is skippered by Tim Urwin and making their debut this year. The Spirit Of Tradition ketch was built at the Royal Huisman Shipyard in the Netherlands. Designed by Dykstra Naval Architects, with a beautiful interior by Rhoades Young.

The 112ft Sparkman & Stephens sloop Kawil, is skippered by Robert Lloyd and taking part in their fourth regatta this year. Kawil’s debut was in 2015 and was a class winner in 2017 and 2019. Kawil was built by Derecktor Shipyards, South Florida USA.

The 112ft Baltic Nilaya, with Filip Balcaen at the helm, is skippered by Rom Loopik. This will be Nilaya’s fifth regatta having won class in 2016 and 2019, as well as class runner up 2017 and 2020. Nilaya has been one of the most successful high-performance sailing boats launched by Baltic Yachts, particularly on the race course. Nilaya is designed by Reichel/Pugh and an interior from Nauta Yacht Design.

The 140ft German Frers ketch Rebecca, is skippered by Rob Foxell with Grant ‘Fuzz’ Spanhake at the helm. This will be Rebecca’s sixth regatta including winning class at the 2012 edition and The Gosnell Trophy in 2019. Built at the Pendennis Shipyard, Cornwall, UK. Her eye-catching looks were designed by German Frers with an interior from Robin Black. A unique feature is the sole, made from antique Heart Pine salvaged from a North American mill built in 1711.

John McMonigall’s Oyster 82 Zig Zag, is skippered by Carl Raynes. This will be Zig Zag’s sixth regatta in a row, including winning The Gosnell Trophy at the last regatta 2020. From the drawing board of Humphreys Yacht Design. Zig Zag is the smallest yacht at the regatta but renowned for racing as hard as any of the largest