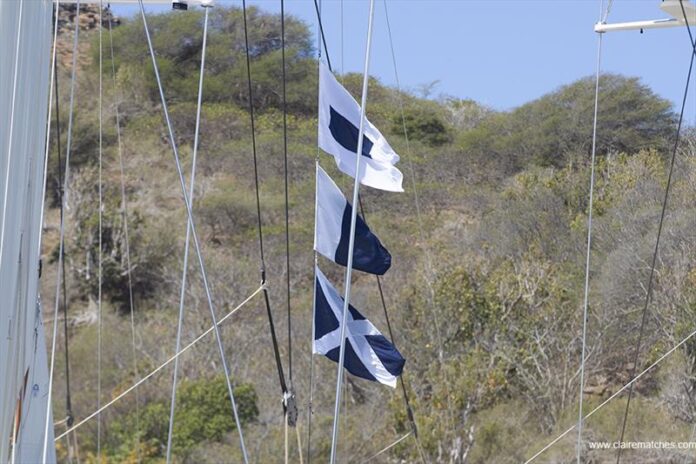 After being injured in training on Tuesday 8th March before the Superyacht Challenge Antigua, Sam Richmond has sadly passed away. Everyone involved with the regatta joins the worldwide sailing community in paying respects to a much-loved and highly respected sailor. Our thoughts and prayers are with Sam’s family at this incredibly difficult time.

On Sunday 13th March, a Remembrance Procession was observed by all competing yachts before the start of the final race of the regatta.

Captain of Farfalla Richard Chadburn spoke at the Remembrance Ceremony at the Admiral’s Inn where a Moment of Silence was observed for Sam Richmond before the SYCA Prize Giving.

Sam started sailing in an Optimist at the age 6 and continued on to sail 420s and 49ers. His transition from sailing as a hobby to working in the industry started as a sailing instructor in Spain, followed by coaching National Youth Squads. In 2004, Sam started racing big boats on the Swan 48 Jacobite, which led to racing worldwide on many different racing boats from Etchells and Quarter Tonners to Superyachts. In 2011, Sam joined North Sails as a salesman dealing primarily with Solent-based racing boat projects. He recently became North Sails’ Head of Sales for Europe.

At Sunset on Friday 11th March, the yachting community in Antigua sounded their horns as an act of remembrance to one of the loveliest guys in sailing.