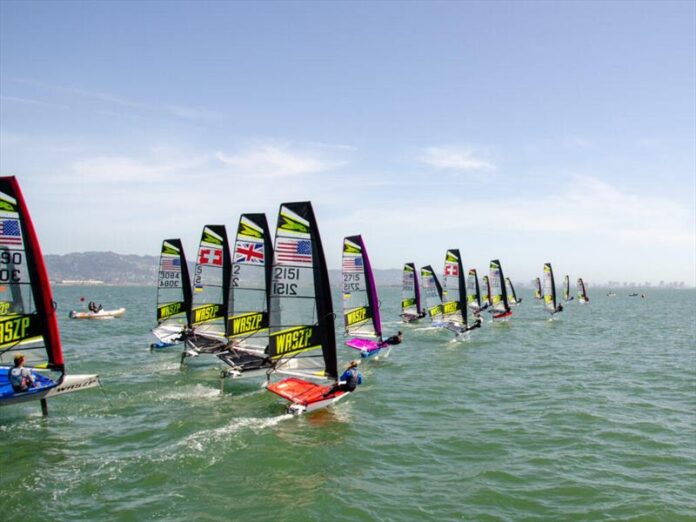 The Slalom event took place on 17 March. This innovative format consists of a solely downwind race in a knockout format. Every sailor was guaranteed at least three races, with the final of the three forming the start of the knockout stages.

As the day went on, the breeze stiffened and the sea state picked up, which had even the most experienced sailors fighting to keep their boats under control.

After a lot of sketchy gybes and a few accidental swims, Reed Baldridge emerged the champion of the downwind course from a grand final of 10 sailors. The furthest travelled sailor of the competition, Nick Zeltner of Switzerland, took second place, whilst local WASZP sailor Hoel Menard took third. Massive respect to all of the sailors that were sending it at full throttle in the notorious San Francisco chop for the Slalom!

Following the Slalom, competitors had the unique chance to head over to the SailGP tech site ahead of the SailGP Grand Final in San Francisco this week. Skipper of the French team, Quentin Delapierre, welcomed the WASZP fleet onto the French F50 for an in-depth tour of the boat. Some of the youngsters in the fleet had their sights set on the SailGP Inspire Grand Final, also taking place this week in line with SailGP. Jaime Framis Harguindey (ESP) and Zac Blomeley (GBR) won their respective home SailGP events and were racing in the Americas in the lead up to Inspire.

The under 21 sailors to represent the USA in the Inspire final were to be decided from the results of the Americas, and Delapierre really helped the sailors realise what could be at stake for those hoping to get their foot in the door at the world’s leading professional sailing circuit. There is every chance that some of those WASZP sailors stepping onto the F50 in awe that night will be racing on the SailGP circuit in a few years’ time thanks to WASZP’s close partnership with the circuit.

The Americas championship title was decided from three days of classic windward/leeward racing from 18-20 March. Weather forecasts and locals regularly disagreed on what they thought might happen with the wind at this very particular venue, but when it was time to hit the water, the sailors always enjoyed near perfect foiling conditions on the Bay.

Nick Zeltner (SUI), Jaime Framis Harguindey (ESP), Reed Baldridge (USA) and JP Lattanzi (USA) all showed great form in the early stages to position themselves firmly in contention. The second and third day of racing saw slightly patchier conditions that punished sailors who dropped off the foils. Baldridge began to suffer with inconsistency, making it a three-horse race on the final day between the Swiss, Spanish and Hawaiian sailors aged 20, 19 and 17 respectively. Lattanzi and Zeltner were tied, with Framis Harguindey two points behind. Lattanzi had the best discards so far, so was the mathematical favourite.

Three races were sailed on the final day. The standout performer of the day was Gavin Ball from Hawaii, who scored a second and a first in the final two races to pull himself up to the podium for the Americas sailors. Ross Banham from the UK did enough to sneak ahead of Reed Baldridge to take fourth in the open event. Zeltner and Framis Harguindey put in impressive performances to keep their title hopes alive, but in the end JP Lattanzi couldn’t be shaken. The 17-year-old continued to score consistent results at the top of the fleet to seal the win in world-class fashion. The Hawaiians are really showing what they can do thanks to their hard work and tight training group and JP Lattanzi has sailed himself into the spotlight as one of the USA’s future sailing stars.

JP qualifies for the SailGP Inspire Grand Final in San Francisco alongside his sister Pearl. In 2021, the Lattanzis’ teammate CJ Perez, also a Hawaiian WASZP sailor, earned her spot on the SailGP USA senior team racing on the F50, so the Lattanzi siblings know exactly what is achievable if they show their best performances on the water this week.

The first ever WASZP Americas was a stand-out success in the international calendar and is now set as a foundation for the class to grow in the USA, Canada and South America. WASZP is delivering the best and most accessible foiling racing for all ages and abilities in the world and is committing to bringing even more events to the Americas in the future.

The North American fleet is on the move with more events scheduled in 2022 and beyond!

WASZP is accepting bids from venues in North and South America for the 2023 and 2024 WASZP Americas and the 2024 WASZP Games!