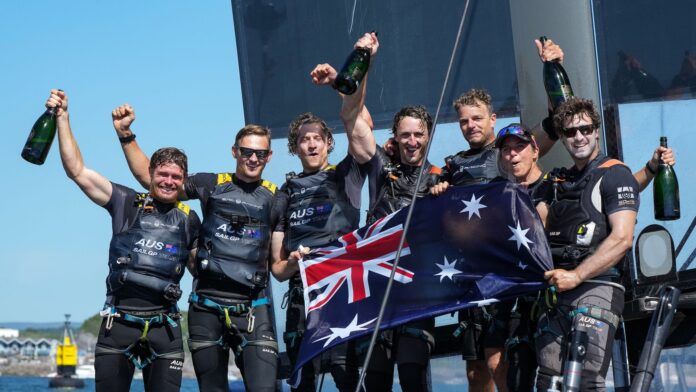 Tom Slingsby’s Australia SailGP Team is the Season 2 SailGP Champions after claiming victory over Japan and the United States amidst unbelievable drama on San Francisco Bay. On a day that saw multiple collisions, a restarted Championship Final Race – after a whale sighting on the course – and challenging winds, Slingsby’s team collected the $1 million prize for winning the season.

In the day’s other historic milestone, Peter Burling and Blair Tuke’s New Zealand claimed the top prize in SailGP’s inaugural Impact League, presented by legendary marine biologist Dr Sylvia Earle. At SailGP, athletes race for two podiums – one for sport, one for the planet. The New Zealand SailGP Team picked up the trophy – made from carbon fiber and depicting the earth balancing precariously on top to represent the fragility of the planet – after accumulating the highest number of points over the course of the season, ending with a score of 1246. Ben Ainslie’s Great Britain SailGP Team came in second (1192 pts) with its Race for the Future partner STEM Crew, and Australia finished third (1161 pts) working with Parley for the Oceans.

In what was a truly unbelievable day of on-water action, Slingsby’s team prevailed over rivals Nathan Outteridge’s Japan and Jimmy Spithill’s United States. In difficult conditions resulting in an unpredictable day of racing, rookie Spanish driver Jordi Xammar crashed into Spithill’s F50 and tore a hole in the back of the USA catamaran. This required the U.S. team to undertake frantic on-water repairs to get ready for the Grand Final and prematurely ended Spain’s day of racing. In the next race France and New Zealand dramatically collided – resulting in four penalty points for Burling despite being the right of way boat – as Australia prevailed to win the Mubadala United States Sail Grand Prix ahead of Great Britain and Japan.

The Championship Final Race started with the U.S. taking the early lead but the action was abandoned after a whale was sighted on the course and – in line with SailGP’s policies to protect marine life – racing was halted for fifteen minutes. In the restarted race Australia dominated, managing to find an area of better pressure on the race course. It opened up an early lead and never relinquished it as all teams battled increasingly difficult conditions and patchy wind. Australia crossed the line first, followed by Japan and with the U.S. trailing.

Slingsby said: “More important than the money is that Australia came out on top and we can call ourselves the best in the world. Money comes and goes and glory lasts forever, I know that’s a saying, but we really feel it right now.”

After a season of highs and lows Spithill was gracious in defeat.

“At the end of the day you really have to credit the Aussies, they have been the benchmark team all season and to come back and do it back to back, it’s very impressive, they deserve the win,” said Spithill.

Australia was joined on the winner’s podium by New Zealand, after they claimed the Impact League title. Launched in July, it rewards positive actions and measures teams’ efforts over each event according to ten robust criteria, including travel, tech and innovation, single-use plastic and using their voice for good. The results are independently audited and verified after each event.

Along with the trophy, co-CEOs Peter Burling and Blair Tuke collected $100,000 for their Race for the Future Partner, Live Ocean. The money will go towards funding partner research into kelp forests and their potential to sequester carbon. Second and third prize – Great Britain and Australia – won $35,000 and $15,000 respectively for their Race to the Future partners.

Burling said: “We’re stoked to win the first Impact League. It’s been a massive team effort from everyone involved, from the shore team, the sailing team, management and our partners.

Tuke added: “Increasing awareness of the vital role a healthy ocean plays in a healthy future has been a massive focus for us this season so it’s awesome that the Impact League victory will enable us to support this important work by the University of Auckland through our partnership with Live Ocean Foundation.”

Season 3 of SailGP will open with the Bermuda Sail Grand Prix presented by Hamilton Princess on May 14 and 15 in Bermuda. Ten teams will contest Season 3 with the addition of Switzerland and Canada to the starting line-up. Events are confirmed in Chicago, Plymouth, Copenhagen, Saint-Tropez, Cádiz-Andalucía, Dubai, Christchurch and the final again in San Francisco. More destinations are still to be announced.

Tickets for the Bermuda Sail Grand Prix presented by Hamilton Princess are on sale here.