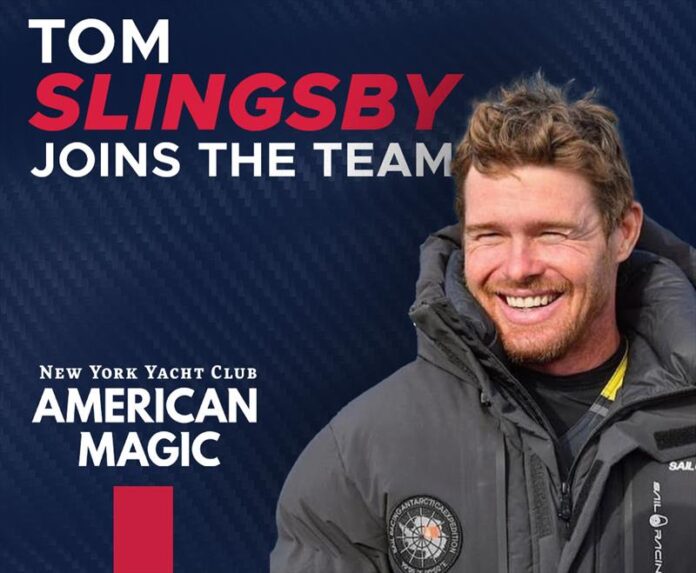 Nearly a decade ago, Tom Slingsby helped an American team win the most prestigious trophy in sailing, the 34th America’s Cup. In 2024, he hopes to do it again. New York Yacht Club American Magic is pleased to announce it has signed Slingsby, a 2012 Olympic gold medalist and multi-class world champion, to its sailing team for its pursuit of the 37th America’s Cup, which will be sailed off Barcelona, Spain, in the Fall of 2024.

“I’m extremely excited to return to the America’s Cup arena,” says Slingsby, 37. “The AC75s are remarkable craft, and I look forward to doing whatever I can to help our team in their quest to bring the trophy back to the United States and the New York Yacht Club. We’ve got world-class talent on board the boat and backing us on the shore, I’m proud and excited to be a part of it.”

New York Yacht Club American Magic was formed in 2018 by principals Hap Fauth, Roger Penske, and Doug DeVos with the intent of winning the oldest trophy in international sports. The team competed in the 36th America’s Cup in Auckland, New Zealand.

Slingsby was a latecomer to competitive sailing, his passion for excellence catching fire while watching the 2000 Olympic Regatta on Sydney Harbour. But he quickly developed into one of the best sailors in the world, winning multiple world championships and an Olympic gold medal at the 2012 Olympics in London. In the last decade, he’s won major championships in everything from 100-foot supermaxis to singlehanded foiling Moths including being named the 2021 Rolex World Sailor of the Year. He sailed with Oracle Team USA in the 2013 and 2017 America’s Cup matches and won the first two seasons of SailGP as the driver of the Australian Team. He will continue with his role on the Australia SailGP Team.

“People are the most valuable resource for any America’s Cup challenge, and we’re excited to have Tom on our team,” says Terry Hutchinson, Skipper and President of Sailing Operations for NYYC American Magic. “As a previous winner of the America’s Cup, Tom knows what it takes to climb that mountain. He has shown incredible ability in foiling yachts, and his skill and experience will be a tremendous asset for American Magic going forward.”

“Having Tom and Paul Goodison, both Olympic Gold Medalists and world champions, driving our AC75 gives us a great competitive position,” says Hap Fauth. “They are fierce competitors who win at the highest level of sailing. Combine this with the world-class team we are building, and I am thrilled with our prospects.”

Slingsby will look to join the team later this summer in Pensacola, Fla., as the NYYC American Magic sets up its training base and begins working toward a victory in the 37th America’s Cup.