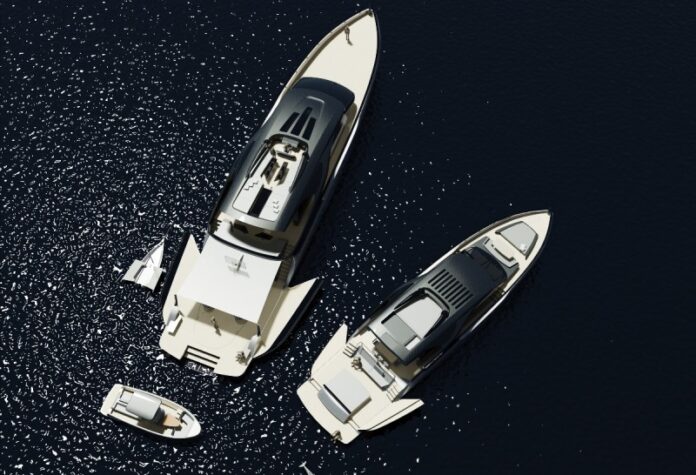 Centouno Navi is a new Made-in-Italy superyacht brand set up by designer and entrepeneur Manuela Lucchesi that draws on Naval Architect Ing. Marco Arnaboldi’s former experience as founder and director of AB Yachts, which he created in 1992 to apply cutting-edge waterjet technology and sandwich composite construction to fast planing yachts.

Based in Viareggio, the inspiration behind the new-generation line of Centouno Navi yachts is twofold: uncompromising performance and the “beauty of nature”. The former is achieved by waterjet propulsion and both debut models are capable of speeds in excess of 58 knots; the latter is derived from studying the grace and efficiency of marine animals.

To make the most of these advantages, the hull structure has to be rigid and robust, but also very light. So Centouno Navi will build its new superyacht models using carbon and glass fibre in a hybrid sandwich with vinylster resin and PVC foam core for optimal mechanical characteristics. Capable of speeds in excess of 58 knots, at high speed they are vibration-free and highly efficient. Both models will have custom interior design and layout options.

The yacht’s profile is dynamic and powerful with a low-slung superstructure, open transom and elongated bow. The terraced aft deck features a fixed swim platform, a large sunbed (with room for stowing a tender underneath) and fold-down bulwarks to increase the deck area and contact with the sea. There is another wide sunbed on the foredeck.

The 39-metre Eterea is the big sister of the Forza and a full tri-deck superyacht. Her hybrid carbon composite construction is identical, but she is fitted with four MTU engines of 2,600hp each coupled to MJP waterjets for a top speed of 58 knots and a cruising speed of 50 knots.

Like the Forza, the Eterea has the same trademark fold-down bulwarks in the stern. There is also the option of sunbed arrangement in the bow with an integrated Jacuzzi and room underneath for a crew tender. The large open cockpit provides plenty of room for stowing a guest tender or chase boat on deck.

“Marco and I are people of the sea”, says Manuela Lucchesi. “We’ve known each other since childhood and spent our whole lives in Viareggio. I can’t really comprehend not being able to hear the sea outside my window. So along with Marco’s 30 years in the yachtbuilding industry and my flair for design, the soul of the sea lies at the heart of Centouno.”