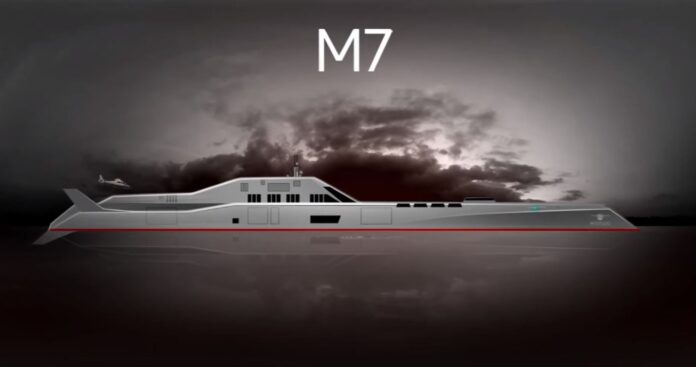 Migaloo is the famous albino humpback that is occasionally spotted passing through Byron Bay, but Migaloo is also a design and superyacht company that boasts of offering “private submersible superyachts, innovative superyachts & floating islands [that] are the world’s most exclusive products.”

Migaloo, founded by Austrian Christian Gumpold, claims to be the future of luxury yachting and, perhaps more to the point, of being able to offer the world’s multi-millionaires and billionaires that ever-elusive sense of privacy they must feel their superyachts can no longer deliver. In reality, Migaloo offers concepts, ideas, renders and, as of recently, NFTs. Vaporware, you might call it.

Be that as it may, one thing you can’t fault Migaloo for is the ability to dream big. Really big. As big as the Migaloo M7 private submersible superyacht introduced a few years ago, which remains the world’s largest (submersible) superyacht design and the most expensive privately-owned asset. Both honors are still on paper, so here’s to hoping you’re in the mood for an outrageous (rich person’s) dream.

Just so we’re clear, not a single submersible superyacht from the M-Series from Migaloo exists beyond the digital realm. The closest you can come to owning any of the various-size superyachts that are also submarines is if you buy an NFT (non-fungible token) of it. You’d still not be able to go anywhere with it, it goes without saying.

Designed for the billionaire for whom a multi-million megayacht is too basic and for whom the desire for privacy trumps even financial common sense, the M7 offers accommodation for 12 guests across eight VIP suites, and a crew of 25 in separate quarters. The owner’s suite sits on a private deck and offers a total of 2,100 square meters (22,604 square feet) of living area, appointed luxuriously.

Amenities on board include spa and wellness area, fully-equipped gym, cinema, dining rooms, bars, lounges and underwater viewing rooms, as well as a helicopter hangar, jacuzzis and pool, and an entire hoard of water and underwater toys packed inside six dry hangars. This is very much a cliché, but as far as amenities go, if you can think it, it’s on board the M7. Moreover, the owner gets the final say in terms of design, features and the final layout, so that the resulting vessel will be truly a one-off.

“Owners are looking for privacy, security and protection for themselves, their guests and their valuables, or for the fulfillment of unique experiences up to scientific desires as well as for the greatest possible exclusivity and limitation,” Gumpold says. It should come in an exclusive package.

When sailing above the water surface, the M7 acts very much like a megayacht, opening up to offer alfresco entertainment areas and quick access to water. The vessel shutters for underwater mode, with the hull built to U.S. Navy SUBSAFE safety standards. Speaking of safety, Gumpold told Bloomberg back in 2017 that every safety feature imaginable would be included. This apparently includes 12 surface-to-air missiles and 12 MU90 antitorpedo – we live in very dangerous times. Propulsion would be hybrid diesel-electric.

Migaloo never disclosed pricing for any of the several entries in the M-Series lineup, but to the same media outlet, Gumpold hinted that the reported price tag of $2.3 billion was not far from the truth. “This would make it for sure to the most expensive private object worldwide.” Not a single eccentric billionaire has jumped at the chance yet.