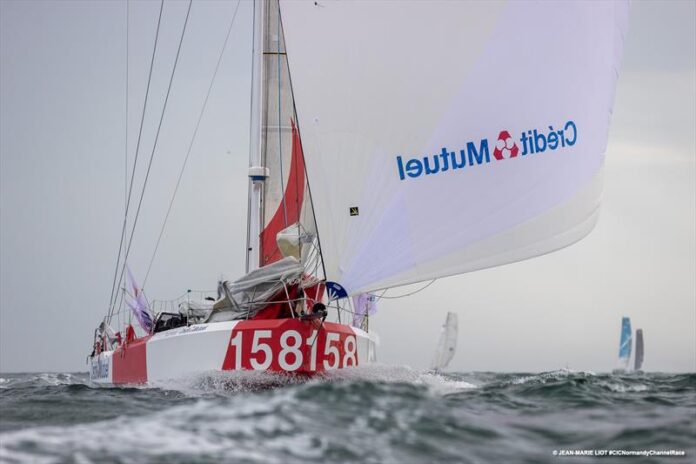 After an extremely tight final night of intense and amazing fighting, ultimately it is Crédit Mutuel, which takes the win in this 13th edition of the CIC Normandy Channel Race.

Ian Lipinski and Ambrogio Beccaria crossed the finish line at 02 hours 38 minutes 18 seconds UTC after 4 days 15 hours 08 minutes and 18 seconds of racing, just 9 minutes ahead of Quéguiner-Innoveo. Corentin Douguet and Yoann Richomme secure silver then in a race which went right to the wire yet again.

The leader board remained undecided for a very long time in this 2022 edition, with a compact fleet pretty much throughout and multiple leaders right the way along this course, which took the fleet as far as southern Ireland and the Tuskar Rock lighthouse. Following an intense start to the race in stormy conditions, it was only once the new course mark of Grande Basse de Portsall was rounded that the race finally switched gears. Already shattered by that point, the sailors had to contend with a strong current and very light breeze in this final sprint for the finish in the English Channel. It was only once they’d rounded Barfleur that the Class40s Crédit Mutuel (158) and Quéguiner-Innoveo (176) managed to shake off their pursuers and launch into a frenetic duel to the wire.

“We’ll remember this race our whole life. When we crossed the line, we said it was one of the finest races of all time. The last few miles were incredibly tense, and we really thought victory was going to slip from our clutches several times. This win is all the finer when you see the standard of the fleet at the start and that of Corentin and Yoann in particular. They sailed a fantastic race and clearly deserved this win too. They were leading the way for part of the race and sailed their boat masterfully well. They were fantastic opponents,” enthused Ian Lipinski and Ambrogio Beccaria at the finish in Ouistreham.

A cruel end in some ways then for the two former Figaro sailors, Corentin Douguet and Yoann Richomme, who sailed a magnificent race, leading the way for a large part of the race. “These 4 days of racing have been a battle royal with a very sustained rhythm, the fleet squeezing back together again on several occasions, culminating in a fierce duel with just metres in it on the finish line. You could not have written a scenario like that. It was an emotional rollercoaster of a ride over the final hours of racing. The outcome is very positive, and I’ve learned a lot more about the boat. It was a pleasure to be a part of this CIC Normandy Channel Race. It was my first. I would have really loved to have secured the win from the get-go but it will be for another time,” assured the magnificent runners-ups in this CIC Normandy Channel Race 2022.

Ian Lipinski required three cracks at the demanding CIC Normandy Channel Race aboard his Class40 Crédit Mutuel to make it onto the top step of the podium and secure victory.

The other great movers and shakers in this 2022 edition, Matthieu Perraut and Kévin Bloch, aboard the Class40 Inter Invest, stand a very good chance of bagging bronze imminently. The six champions have treated us to a showstopping spectacle right to the last.

The denouement in the battle for 4th and 5th spots is just as uncertain… So which of Project Rescue Ocean, Groupe SNEF and Eora will complete the Top 5? All will be revealed later this morning…