HomeEventsRegatta25 solo skippers set for the start of the Vendée Arctic -...
EventsRegatta 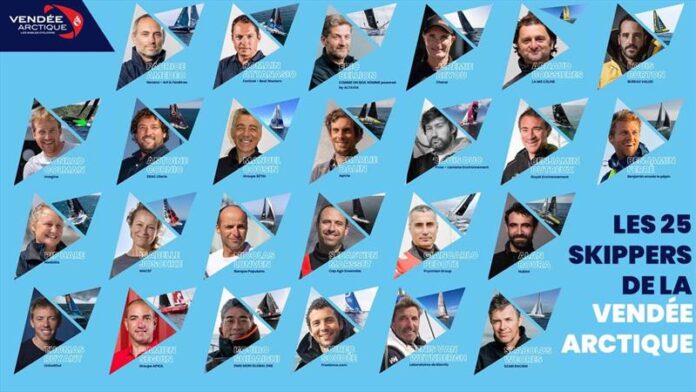 The sporting as well as the media successes of the phenomenal 2020-2021 edition have really stimulated skippers’ projects and their sponsors, so that this time the transition phase from one race to the next has proven to be particularly short. The Vendée Arctic is the first of the five races* for skippers to qualify to be at the start of the the Vendée Globe 2024. So naturally skippers want to get qualified as quickly as possible.

The start of the Vendée Arctic will be sounded on Sunday June 12 at 1700hrs local time off Les Sables d’Olonne. The 25 skippers will then face 3,500 miles of a challenging and unprecedented course, which will take them on a race of discovery to the northern waters of the Arctic Circle.

The Vendée is a French Department for which tourism is a main economic activity. It is looking to strengthen its position as a premium organizer of offshore ocean races at the same time seeking to lengthen and augment their tourist seasons. In the pure tradition of the Vendée Globe, the race embraces its widespread popular following with a large race village open in Les Sables d’Olonne for three weeks, from June 4 to 26.

Seventeen of the 25 skippers who have entered the Vendée Arctic competed in the Vendée Globe; 15 took the start on November 8, 2020. Eight sailors are therefore competing in this race as they head forwards on their course towards their first Vendée Globe.

The skippers in figures:

A grand parade and a start village

In line with the Vendée Globe, the Vendée Arctic embraces its popular following. The festivities will begin with the great parade of Vendée Globe skippers, which will take place on Friday June 3, from 9.30 p.m. The SAEM Vendée really wanted to thank and celebrate its skippers for the 2020-2021 edition which could not be done last year due to health restrictions. This festive parade on the embankment of Les Sables d’Olonne will conclude with a pyro-musical show by Jacques Couturier, around 11 p.m., visible from the Grande Plage.

The departure village, accessible to all, will be open from Saturday June 4 at 10 a.m. to Sunday June 12 with the 25 boats moored at the pontoon.

From June 15, it will reopen, transformed into a race village. It will be the anchor point for the public and the place to welcome skippers on their arrival. Entertainment and information throughout the day.

Discover: the spaces of the Department of Vendée, Vendée Tourism and other actors of the village will accompany the discovery of the race, sports projects and territories.

The Arctic theme will be at the heart of the event with a photo exhibition on the Arctic by Florian Ledoux, the presence of Under the Pole and Pure Ocean with their awareness stands.

Have fun: a 200 m2 synthetic ice rink, Virtual Regatta Inshore challenges open to the public, daily quizzes and, from June 15, remote-controlled sailboat races and a waterball challenge will give the village its playful dimension. Concerts, as well as the music festival on June 21, will help to highlight the festive spirit of the village.

The complete program of events here

In addition to the imperative of sporting qualification, there is also that of selection: because to be one of the 40 starters in the Vendée Globe 2024, you will have to have run the most miles in the races of the IMOCA GLOBE SERIES Championship.