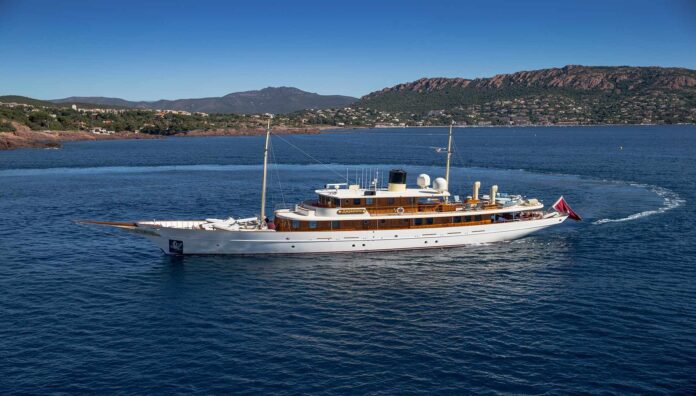 When it comes to celebrity-owned assets, the golden rule seems to be “the bigger the better.” The fancier the superyacht, the more important the celebrity; the more custom the private jet, the bigger the car collection, the more expensive the mansion – they all add weight to a celebrity’s image and public appeal.

That may hold true for most public figures, but Johnny Depp was never your run-of-the-mill celebrity. As Hollywood’s highest paid star, at his career peak, he was worth well over $900 million, but that amount has since dwindled down to $100 million – $150 million tops. His financial turmoil is attributable to a series of factors, of which standouts are his failed marriage to Amber Heard and her domestic abuse accusations against him, and his unchecked lifestyle, which included expenses like $500,000 a month on wine alone.

Back when he was still Disney’s favorite pirate and the ultimate heartthrob, Johnny Depp was also the owner of one of the most famous celebrity-owned boats. Vajoliroja, often described as a combination between gypsy caravan, Art Deco luxury hotel, and the fanciest private railway car, the motoryacht wasn’t famous because it was big, or packed with outrageous amenities, or for that matter, eye-watering expensive. It was famous because it was his, and because it was everything you’d image a Johnny Depp boat would be.

Vajoliroja is no longer in Depp’s portfolio of assets, because the actor was forced to sell it in 2016, after several meetings with his advisors and the conclusion that he needed to liquidate to avoid bankruptcy. The decision was very taxing on the actor, it has emerged in the ongoing Depp vs. Heart defamation lawsuit. Knowing some context about the motoryacht makes his sadness at having to part with it more understandable.

Vajoliroja is an older motoryacht, delivered by Proteksan Turquoise Yachts on commission in 2001. It has a steel hull, and aluminum, GRP and teak superstructure, and clear 1920 steampunk vibes. Until Depp bought it, it sailed under the Anatolia name, and it had already been on the market for a while when the actor decided he wanted to invest in a yacht. Whereas most celebrities will want something new, Depp looked on the used market, because he wanted something with personality.

Anatolia caught his sight but was initially deemed too small. At 156 feet (47.5 meters), three decks and accommodation for 10 guests and nine crew, it was that, because he compared it to the long-range explorers he’d been looking at. An explorer, though, has everything but personality, so Depp ended buying Anatolia sight-unseen, for an undisclosed amount.

Upon purchase, Anatolia came with naval architecture by Tanju Kalaycioglu and interior styling by Redman Whiteley. The latter was ripped out in a first 2007 refit, and replaced by a design by LM Pagano, working in close collaboration with Depp himself. The boat was technically Depp’s in late 2006, but it was ready for sailing in the summer of 2007, now with a lavish, pirate-themed interior and a new name: Vajoliroja, which stands for the first letters in the names of the family members, VAnessa, JOhnny, LIly-ROse, and JAck. The refit supposedly cost over $7 million, with a reported total cost for the boat at some $30 million.

After Depp’s wedding to Amber Heard, it was renamed Amphitrite, goddess of the sea and Poseidon’s wife in Greek mythology. In early 2016, after vacationing on it and falling in love with the interior, Harry Potter author J.K. Rowling bought it for a reported $24 million or $28.9 million. Less than a year later, she listed it for a little over $19 million, so whatever infatuation she must’ve felt with it dissipated fast – and at a cost. The current owner is unknown, but he is believed to be a businessman. The boat now sails under the name Arriva, exclusively with the owner.

As far as we know, the Pagano interior, which gives this boat its unique personality, is still in place. Highlights include luxurious materials like crushed Italian velvet, silk and jacquard, custom oxidized patterned leather, antiques brought in from all corners of the globe, plush chenille on the walls, feathered hand-painted trims, and 24-K golden fixtures as furniture accents. At first sight, the styling is too much: not just overwhelming, but downright suffocating. In her only interview with Boat International years ago for the print edition, Pagano said that Depp himself was directly involved in the design and that the result worked surprisingly well. Even more, the boat was a cool and comfy “hang.”

Each cabin has an ensuite bathroom, and ostentatiously makes up for the lack of extra space with plush décor and custom touches. For instance, each cabin has its own custom stationery with an old pirate font, commissioned for Depp. There is no helipad, pool or jacuzzi onboard the former Vajoliroja, regardless of what you might read online, but you do get a large, sheltered dining area aft and a cozy sun deck. Amenities also include an indoor dining hall, a private cinema, and a range of water toys, including a Riva-style custom tender sitting at the bow.

As Depp once said, “Money doesn’t buy you happiness, but it buys you a big enough yacht to sail right up to it.” Today, ex Vajoliroja, Arriva is someone else’s vehicle towards that happy place.