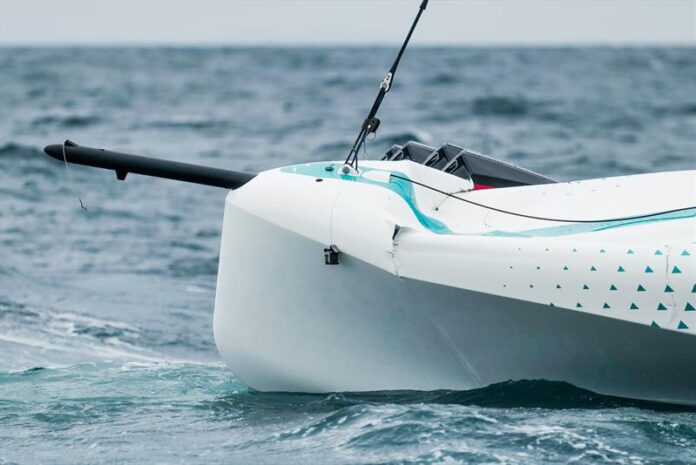 It was a day when the awesome power and speed of the AC40 (now in full LEQ12 mode) was on display, putting over a mile on the chase boat which was travelling at 36 knots in lumpy seas, before a deep nose-dive caused structural damage to the bow area with a nasty carbon crack emanating from the forestay and down along the starboard side stopping just short of the internal bulkhead in the crash-zone area of the boat.

The subsequent capsize was inevitable but rewinding to the actual incident preceding the damage, the team were going into a series of high-speed gybes when they caught a wave at height, lost the rudder and were largely passengers to the incident that happened very quickly. The Kiwis were in full LEQ12 testing mode with manual flight control and were up on their flat sectioned starboard foil and well into the 40-knot speed range in a building breeze that topped out at 22 knots and a moderate to rough sea state.

A clearly concerned Grant Dalton, speaking afterwards noted: “It’s really early to say what happened but in the stuff, they lost the rudder, they’re in LEQ12 mode at the moment, manual control, stuffed it pretty deep but it happens, then it rounded up and it looked like the deck has creased and then the compression on the starboard side has allowed the bow to come round as well and crushed that.”

The LEQ12 was righted quickly by the experienced chase boat crew who were highly praised by the sailors, Dalton and the recon unit on the water for their calmness and professionalism in the situation and the boat was expertly towed back to the base on its foils. The design team and engineers will be looking closely at the damage and analysing the load profiles that the boat experienced in the nose-dive and as Dalton offered: “It could be that we need to put another ring frame in the bow area just to strengthen that whole area up…or we might need some longitudinals.”

With the INEOS Britannia AC40 now delivered and in Mallorca at their winter training camp, a second ETNZ AC40 due for imminent delivery in Auckland and the Alinghi Red Bull Racing AC40 still in the factory at McConaghy’s in China, all of the boats will now undergo modifications to beef up the structural resilience of the bow area to avoid further incidents occurring but as Dalton said: “The boat was never in any danger at any time” as the water-tight bulkhead aft of the bow area was not breached.

Onboard at the time were the established test team of Nathan Outteridge, Pete Burling, Blair Tuke and Andy Maloney who had docked out early at 9.15am to catch the morning breeze before the expected deterioration in the weather into the afternoon. Pete Burling summed it up saying: “Really tough day for us as a team. We were sailing out into some waves and really pushing things to the upper end of the spectrum but obviously we had a pretty good crash down the back of a wave…one of the pleasing things was how we managed to get the boat back here without any more damage and I think the whole team out on the water did an amazing job.”

Grant Dalton called it a: “text-book recovery,” but it was a tough day at the office for the Kiwis and the LEQ12 is now back in the shed with the build-crew burning the midnight oil to have her back on the water in double-quick time.

On-Water Recon Unit Notes: Good reach/beat out to the Noisies in flattish water. Boat looked fast and in control. Once out past the Noisies the sea state got up to 1.2m with building pressure. The yacht bore away and headed toward Gannet rock. Two good gybes were watched but the yacht was really starting to pull away, the chase/recon boat was doing 32-36 knots. Just before the capsize she had put over a mile on us.

Going into a gybe the rudder came out and the boat pitch-poled quite hard. She capsized onto her port side, the deck just aft of the chain plate has deflected and the whole bow section has come aft about 250mm and up about 350mm. Damage was all forward of the watertight bulkhead.