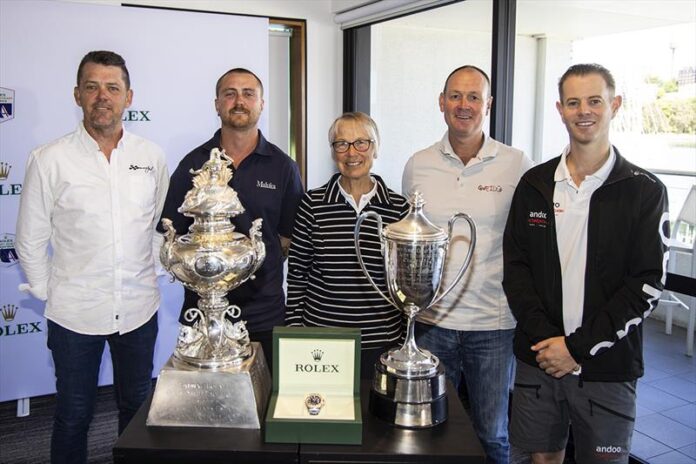 A strong fleet with an international flavour and multiple former winners and record holders is preparing to take on the 2022 Rolex Sydney Hobart Yacht Race.

118 boats are entered for the 77th edition of the Cruising Yacht Club of Australia’s (CYCA) 628 nautical mile race, which begins on Sydney Harbour at 1pm on Monday 26 December.

The four 100-foot maxis leading the charge for Line Honours are Black Jack, the 2021 Line Honours winner, Hamilton Island Wild Oats, which holds the record for most Line Honours wins with nine as Wild Oats XI, the race record holder Andoo Comanche, now skippered by John Winning Jr, and LawConnect, which was first over the line in the 2016 race as Perpetual LOYAL.

Speaking at the 2022 Rolex Sydney Hobart Yacht Race Media Launch at the CYCA on Wednesday, Black Jack skipper Mark Bradford said: “The best international sailors in the world will be here for the race.

“Achieving your goal in the race, whatever that is, does take some time to reflect on and I think for us that moment came when we decided to do it again.

“Weather is such a big part of the overall picture. We have seen over so many years all of us (100-foot maxis) getting to the Derwent at the same time somehow. I think this year will be no different to normal.”

Andoo Comanche skipper John Winning Jr said: “I have to honour the boat and do it justice; it’s had some fine form. I certainly back myself to be as good as anyone.

“We have to be ambitious and bullish. I’ve got an amazing crew around me and we’re going to be pushing the boat as hard as we can to get the best result possible.”

Kathy Veel and Bridget Canham are the first all-female two-handed crew to compete in the race.

The pair will sail on Veel’s Currawong 30, Currawong, as one of 22 two-handed entrants, that for the first time are eligible to win the coveted Tattersall Cup, awarded to the overall winner on IRC corrected time.

Asked if she had second thoughts about taking on the race two-handed, 70-year-old Veel said: “Heaps! But sailing is something I love doing. I had a boat that was capable of it. I am in good enough health physically to be able to do it.

“With the Two-Handed Division introduced, all of a sudden it seemed something that was possible, with our really, really limited resources. I paid really small money for the boat and we have put in a bit since then, but I look at Comanche when we are out on the water at Woolwich and think, it’s such a different story.”

The legendary challenge of the Rolex Sydney Hobart attracts a diverse range of competitors and boats.

At the other end of the spectrum to the 100-footers is the smallest and oldest boat in the fleet, Sean Langman’s 9-metre Ranger Maluka (built in 1932), which will be skippered by his son Peter.

“Maluka has a pretty special place in my heart,” Langman said. “Whenever I finish a race on Maluka I feel it is an accomplishment. That is what dragged me back to the race.

“She is a safe boat and we are all pretty confident she will get there in one piece, she is in great condition.”

The fleet of 52-foot grand prix racing yachts are expected to once again challenge for Overall honours.

Matt Allen’s Botin 52 Ichi Ban won three of the last four races. Allen announced this afternoon that he would not be doing the race this year.

“I feel like we’re doing a bit of an Ash Barty in a way. It’s time for me to do some other things. I’ve been busy with sailing and voluntary roles with the Australian Olympic Committee and World Sailing,” said Allen, who has four Sydney Hobart victories and 31 Sydney Hobarts behind him.

“To some degree I feel we’ve achieved what we set out to do with the boat. I’m conscious we’ve equalled the record of Freya and Love & War, and having known both skippers.

“I really want to thank my crews over the years. They have done a terrific job sailing it with me and helping to develop the boat. It’s been an enormous privilege and adventure and I’ve enjoyed every minute of it, but it’s time to do other things.”

Allen ended by saying “I am leaving both boats entered in the race for the time being, in case someone wants to borrow either one.”

Gweilo co-owner and skipper Matt Donald said: “[The 52s] are in sight of each other the whole race. We will have to perform at our best every day.

“Each and every inch counts in our division. In the Rolex Sydney Hobart, it’s about pushing as hard as you can and we won’t hold back if we get the chance again.

“Anyone can win on any given day.”

The Boxing Day start of the 2022 Rolex Sydney Hobart Yacht Race will be broadcast live on the Seven Network throughout Australia and live-and-on-demand on the 7Plus app.

For the full list of entries and more information about the race, visit www.rolexsydneyhobart.com.