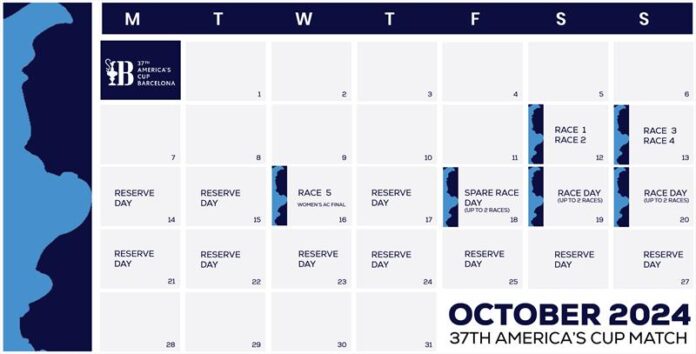 The Racing Area for both the Challenger Selection Series and the America’s Cup Match itself have now been agreed with Barcelona’s Capitán Marítimo and are set to the south of the City along Barcelona’s beachfront, affording the perfect natural viewing gallery right along the coastline for spectators.

A permanent exclusion zone for the duration of the racing has been agreed to ensure safety for both the competitors and the expected daily armada of spectator boats that will take the opportunity to see the AC75s and AC40s at close range. But for those onshore, racing could, depending on conditions, see action just a few hundred metres off the beach at times and with galleries and fan zones planned, Barcelona will be set to host the world at this, the 37th America’s Cup.

Also confirmed is the date for the Women’s America’s Cup Regatta Final which occupies prime time viewing, to a global audience, straight after Race 5 on October 16th 2024, giving the women’s event significant coverage and profile. Racing the new and exciting AC40 class set up in strict one-design mode, the sailors that get to the final of the Women’s America’s Cup will undoubtedly be some of the finest foiling athletes on the planet and a clear pathway to the future of the America’s Cup will be on show.

Racing in the America’s Cup Match itself, which will be a best of 13 (first to seven) format will commence on Saturday 12th October with two races scheduled, followed by a further two races on Sunday 13th October 2024. Racing will then pause for two days, however at the discretion of the Regatta Director and after consultation with both the Defender and the Challenger, and depending on conditions, both of these days could be used to complete two races a day. The schedule as it stands, without the use of the Monday or Tuesday, would recommence on Wednesday 16th October 2024 for one race (race 5) in the Match followed by the Women’s America’s Cup Regatta Final as mentioned above.

Thursday 17th October is officially not scheduled for racing but again, subject to the Regatta Director’s discretion and agreement with the competitors, could be allocated for two further races depending on conditions whilst Friday 18th October 2024 is officially marked as a ‘Spare Day’ for up to two more races. Two races per day are also scheduled for Saturday 19th October and Sunday 20th October 2024, if required.