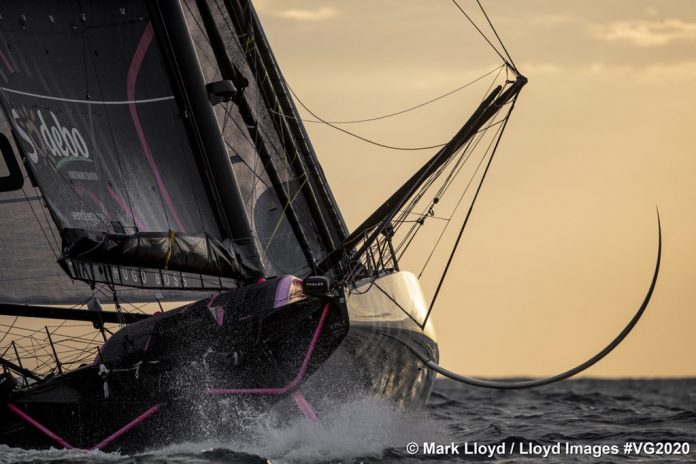 As he leads onto the trade winds motorway down the Atlantic,  between the Canary Islands and the Cape Verdes, British skipper Alex Thomson is expected to increase his lead at the head of the fleet as his foiling Hugo Boss hits its stride.

Accelerating through the day Thomson has shaken off veteran Jean Le Cam, averaging two knots faster, and is the only skipper in the race to have sailed more than 380 nautical miles in the last 24 hours.

NEE’ly Trade winds of 20-22kts are expected to blow for Thomson and the leading peloton over the coming days. Sunday, one week into the race, has offered many skippers in the top group to take essential time to look after themselves, to wash, to make a ‘treat’ meal or drinks, to change into fresh clothes, as they prepare for what will still be a demanding, active period, even if it is a boatspeed drag race on port gybe for several days.

“You can’t forget the trade winds are not as stable as you maybe think, the direction still changes ten to fifteen degrees and the wind will go up and down, there are still gusts and so you have to be attentive and there will be a lot of trimming to do.” cautioned Seb Josse, who is serving as one of the Vendée Globe’s meteo advisers.

Skippers today expressed their admiration for Thomson’s race so far.

“He has mastered the start of this race perfectly with his ingenious, efficient and well-prepared boat,” commented guest of the Vendée LIVE French show this afternoon. “Alex is going to take the fast train south and that can quickly turn into a big lead,” notes Thomas Ruyant from fourth placed LinkedOut at over 120 miles behind Thomson.  “And Alex is hungry for it, but so am I.”

One of the pre-race favourites Charlie Dalin, in sixth at 168 miles adrift of HUGO BOSS, wants to stay in the match but acknowledged: “My decision to move out west was because the storm was too early on into the race to take any risks and I did the calculation of what I could afford to lose and try and make up, Alex went full on in the Theta depression and that can give him to make a big margin”. Dalin, the Apivia skipper chuckled on the live show “Wait for me guys, I am stoking up the coal, I’m coming! “

HUGO BOSS is due at the latitude of the Cape Verde islands tomorrow and is expected to pass the doldrums on Tuesday. According to Vendée Globe weather specialist Christian Dumard the leaders may be treated to a relatively straightforward crossing into the Southern Hemisphere.

At the Port Olona pontoon in Les Sables d’Olonne, the technical team of experts have been working round the clock onboard Charal, the damaged IMOCA of Jérémie Beyou, aiming to have it ready for Beyou to return to the course. A press conference is planned for 1700hrs CET Monday to announce the decision.

Japanese skipper Koji Shiraishi has managed to lower his damaged mainsail on his DMG MORI and is evaluating the options to repair the tear.

Skippers have been rewarding themselves as they break into warmer climes. “It has been the first day with some time for me, it feels good,” admitted third placed Benjamin Dutreux (OMIA – Water Family). “I have been on the terrace (cockpit) having a good coffee”.  Each has enjoyed their own way of  treating themselves, Alan Roura (La Fabrique) had his first shower, 1 litre of salt water then 1 litre of fresh water. Yannick Bestaven (Maître CoQ IV) took the time to listen to a “rock” playlist, Boris Herrmann “had a little aperitif and called up his friends”.

Damien Seguin, slept seven hours last night, treated himself to a small feast with Parmentier hash and Beaufort cheese. Sunday morning, Manuel Cousin (SÉTIN Group) started the day with a good roasted coffee – “just like at home” – and a piece of chocolate from a chocolate maker sponsor. Clarisse Crémer (Banque Populaire X), too, looked more relaxed. On the deck of her IMOCA she was appreciating the beautiful seascape, “This is the picture postcard image that you have in your mind of ocean racing.” Said the skipper who admitted to being ‘a bit freaked out’ by the prospect of dicing with the storm Theta, “It feels good to have a lighter heart! “