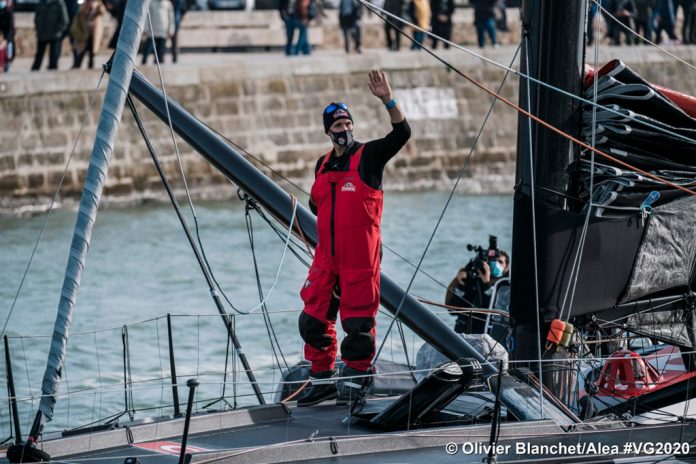 On a chill, grey November afternoon a drawn and disappointed Jérémie Beyou was touched by the size and warmth of the welcome afforded to the French skipper on his premature return to Les Sables d’Olonne with his damaged Chara.

Forced to return 600 miles back to the start port after his IMOCA was damaged on the third day of racing, hundreds of local fans turned out to see the 44 year old return down the famous channel. At a brief, carefully choregraphed, distanced reunion with selected media, Beyou made it clear he wanta to return to the race course if the damage to his boat can be 100% repaired.

“If technically it can be done, the plan is to go. That is the objective.” Stated an emotional Beyou beside his black and silver hulled Charal. “I really want to go, that is not the issue, I want to maintain this frame of mind. I will be 3,000 miles behind so it is no longer a race, but we will see.”

Underlining the urgency to have the boat ready as quickly as possible there was a diver in the water as the IMOCA docked to evaluate the underwater surfaces following the strike by a floating object, the cockpit was quickly covered to facilitate the composite repairs required and the damaged rudder was quickly removed.

“I am convinced that we will try and fix it, but the devil is in the detail. I see that everyone is here. The designers, the builders, all the experts and shore team will collaborate and so we will know within 24 hours. Then we will take a decision.”

“Stopping was brutal for me.” He recalled, his voice shaking at the memory.

“I hope Jeremy re-starts and I hope it is good for him. You just never know on this race.” Commented Mike Golding on the Vendée Globe LIVE show today. Golding was dismasted hours into the 2000-2001 race and restarted a week behind the fleet going on to finish seventh, setting several records in the Southern Ocean, some of which still stand today.

Foilers To Stretch?
At the top of the fleet Jean Le Cam (Yes We Cam!) still holds the lead by 21 nautical miles from Alex Thomson (HUGO BOSS) as the pair open the route into the Ne’ly trade winds.

“Everything is good on board with Alex. He has been resting a bit. He was quite happy through the low (Theta) really. He has seen plenty of big winds before, 50,60 knots, and so if there is a gain to be made he will go there. I think we will start to see the foilers dominate now a bit more. With the winds around 100 degrees true they should be quick for the next 4-5 days.” Commented Ross Daniels, Alex Thomson Racing’s Technical Director this afternoon.

Located furthest to the west, Charlie Dalin (Apivia) was the first to gybe followed by Thomas Ruyant (LinkedOut) and Kevin Escoffier (PRB). 150 miles to the southeast of them, Le Cam and Thomson gybed early in the afternoon on to a more favourable angle and more wind, and therefore a slightly more direct course.

“It’s going to be a long gybe straight into the doldrums and the foilers, who haven’t yet had the chance to show their potential, will finally be able to do it. We should fly” Thomas Ruyant added on  Vendée Live, “We will get good reaching angles and start to accelerate.”

But vigilance will be required, explains Sébastien Josse, with three Vendée Globe’s under his belt: “It will not be a cruise with the force of the wind – 20 to 25 knots – and on the crossover of a sail choice between Code 0 and fractional gennaker.”

Mainsail Damage For Kojiro
In the middle of the afternoon Kojiro Shiraishi’s DMG Mori Global One team reported a rip at the top of the Japanese skipper’s mainsail and damaged battens. After a gybe to exit the Theta depression, Shiraishi, 19th at 3pm, suffered an autopilot malfunction. During a 3rd gybe, his mainsail tore above the 2nd batten. His team commented: “The skipper is not injured and the boat is not in danger. We will be offering different solutions to repair the mainsail and continue the race.”

Meantime the peloton has raced off and left a group of competitors in next to no wind, Ari Huusela (Stark), Miranda Merron (Campagne de France), Alexia Barrier (TSE – 4myplanet), Clément Giraud (Compagnie du Lit / Jiliti), Sébastien Destremau (Merci) and Armel Tripon (L’Occitane en Provence). “The corridor of wind between the depression and the front above has narrowed down, and they are in the heart of a windless zone and behind thate there is not much with either.” Christian Dumard, the Vendée Globe meteorologist explained.