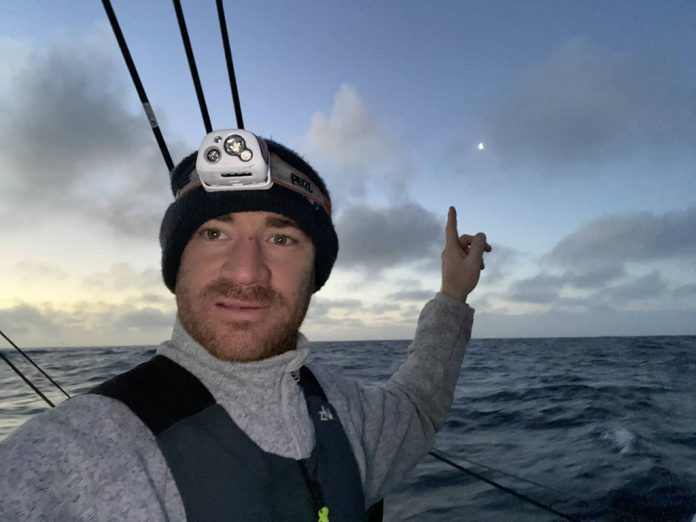 With Benjamin Dutreux, the young Les Sables d’Olonne skipper passing Cape Horn this afternoon at 1452hrs UTC there are now five Vendée Globe skippers back in the Atlantic Ocean on the 7000 miles climb back to Les Sables d’Olonne where the winner could finish in the last week of January.

The 30 year old Dutreux passed the Cape in breezy conditions on his OMIA-Water Family this afternoon.  Formerly Alex Thomson’s Farr designed HUGO BOSS which finished third on the 2012-13 race, Dutreux’s boat is the second non-foiler in sucession to round the infamous rock after Damien Seguin on Groupe APICIL passed at 0240hrs this morning.

But as a clear reminder of how close the race up the Atlantic will be in the coming days and weeks, and indeed how busy the finishes are likely to be, no fewer than five more solo skippers should round Cape Horn in the coming hours, all within 150 nautical miles of each other this Monday afternoon.

Deliverance from the ‘big south’ came for Thomas Ruyant on LinkedOut very early this morning as he made third place at the Cape at 0040hrs UTC followed exactly two hours later by 42 year old twice Paralympic gold medallist Seguin. Both skippers were overjoyed on their release from the Southern Oceans, not least Ruyant who had to retire in 2016-17 when his boat nearly broke in half after hitting something south of New Zealand.

“My first Cape Horn, in fourth position too, it is crazy I cried many tears. I have arrived! ” said the skipper of Groupe APICIL, moved and happy after 56 days and 13 hours of racing. Dutreux came next and will be followed by Louis Burton – the only skipper so far who has passed before, then Jean Le Cam on his seventh rounding, Herrmann on his fourth, Maxime Sorel, Giancarlo Pedote and Isabelle Joschke.

This evening and tonight the winds will build again to 40kts lashing the lonely South American rock: a powerful northwesterly flow will strengthen, generating gusts of over 40 knots and heavy seas. The lighthouse keeper on Hornos Island will be kept busy.

The lighthouse looks over the deadly stretch of water where 10,000 sailors are believed to have died in the 16th to 18th centuries when more than 800 different ships were wrecked or lost on the Drake Passage. The lighthouse keeper lives there with his family and they are the only inhabitants of the island, the position offered and managed by the Chilean Navy. Cape Horn was discovered in 1616 by Dutch explorers Willem Schouten and Jacob Le Maire after whom the passage between Staten Island and the mainland is named.

Sunday afternoon the Franco-German sailor Isabelle Joschke suffered the failure of the hydraulic ram which cants the the keel of her IMOCA MACSF. She was lying in eighth place when the ram failed and has now dropped to 11th. She will have to sail the remainder of the race with her keel fixed in the central position therefore lacking the righting moment and power that the canting system gives. “I am moving into another dimension. I am disappointed, I am so sorry to lose the competitive ambition of my race”, she confided to her technical team. Joschke had already recently lost her wind wand and torn her gennaker, but is looking forwards to her first passage of Cape Horn this evening or tomorrow morning.

The passage north is a tricky conundrum for the leaders as they look to break through or round a high pressure system which blocks the route north of the Falklands. Yannick Bestaven (Maître Coq IV) leads by 195 miles from Charlie Dalin (Apivia) while Thomas Ruyant is trying a more direct, westerly route.