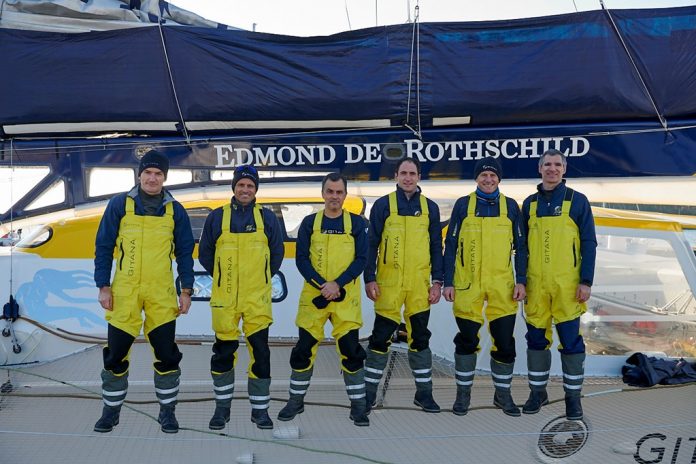 The pontoons of Lorient La Base were positively buzzing this afternoon. After a final scan of the weather charts and models, the Gitana Team took the decision this morning to switch to code green and set sail once more on the quest for the Jules Verne Trophy. Despite the wintry weather, there was a generous Breton sunshine this Saturday 9 January and the emotion was palpable, as reflected in the eyes of the six sailors just hours before they launch off on this attempt to secure the legendary round the world record under sail. The crowds were out in force to give them the send-off they deserve.

After two months on standby, punctuated by a first attempt which was cut short after the boat collided with a UFO and several potential weather windows that ultimately didn’t play out as the team would have liked, it’s all system go now for the two skippers, Franck Cammas and Charles Caudrelier, and their four crew. Indeed, everyone is raring to go and fully committed to an express circumnavigation of the globe aboard the Maxi Edmond de Rothschild, the first giant designed for open ocean flight. The challenge is an extraordinary one, because the bar has been set very high thanks to a reference time to beat of 40 days 23 hours and 30 minutes, which has been held since January 2017 by Francis Joyon and his crew on Idec Sport. It is between 23:00 UTC tonight and 03:00 UTC tomorrow that the men of Gitana Team are set to cross the start line, offshore of Ushant, and set in motion the stopwatch for their sprint around the world.

The art of a departure

After a final weather briefing on shore and via a remote link to Marcel van Triest, router and 7th man, the six sailors from the five-arrow racing stable headed down to the 32-metre trimaran shortly after 14:00 UTC, eager to set sail on the quest for the title of the fastest sailboat around the world. Choosing the day and time of departure in relation to weather forecasts deciphered and analysed with surgical precision is a rather special art, peculiar to the Jules Verne Trophy. With regards this little game, which involves selecting the best launch window, the crew of the Maxi Edmond de Rothschild have been impatient to get going, but have learned to put up with the delay. However, the moment has now come and with a clear weather sequence across the whole of the Atlantic, they’re finally in the starting blocks and ready to set sail on this furious race against the clock. “We set off right at the start of standby, but we knew that the situation wasn’t ideal. Since our return, we’ve seen and observed six windows, which ultimately closed. As such, we’re especially happy to be going for it now with a weather configuration which, though still a little uncertain in terms of the low-pressure systems in the southern hemisphere, is providing us with a great opportunity”, explains Franck Cammas.

Less than 12 days to the Southern Ocean

“We set ourselves the goal of making the equator in a sub-5-day time and 11 and a half days to Cape Agulhas, at the gateway to the Indian Ocean. That’s just what we have here, according to the routing at least. The situation isn’t yet completely locked in for the South Atlantic but it’s a good window, perhaps the best we’ve had since the start of our standby”, admits Charles Caudrelier, his far-off gaze already lost to the horizon. “To stand a chance of improving on the time set by Francis Joyon, who benefited from a dream weather sequence to traverse the Indian Ocean and half the Pacific on the leading edge of a low-pressure system with a constant speed of 35-38 knots, we believe we need to have a lead of around two days before we begin navigating our way around the Southern Ocean. For us, exploiting the versatility and speed potential of the Maxi Edmond de Rothschild thanks to her foils and appendages could make the difference in the transition phases during the descent and ascent of the Atlantic”, he adds.

“Circumnavigating the globe by adopting the fastest route possible over a free course, with zero constraints on a technical or human level, is quite a feat. In fact, though it may seem simple, it’s actually extremely complex, particularly in terms of strategy”, stresses Franck Cammas, who has already previously bagged this fabulous record and knows that it is increasingly hard to beat. His time came in 2010 when he had nine other crew members alongside him and looped the big loop in under 50 days (48d 7h and 44 mn). Eleven years later, his competitive spirit more honed than ever, he is returning to this planetary journey which, with its concept of exemplary simplicity and purity, ranks among the highest summits in sailing. “The Jules Verne Trophy has changed a great deal as a challenge over the years. Today, it’s all about sailing eight days faster than ten years ago. With the Gitana Team, our timing is right for competing against the clock by taking on the challenge of flying offshore as much as possible so why not secure a historic and legendary sub-40-day time in the process, because it’s a barrier that has to fall one day,” adds this all-rounder, who was recently voted Sailor of the Decade 2010/2020 by the French Sailing Federation (FFV). “It’s a challenge we at Gitana Team have done a lot of preparation for and it’s very exciting. However, it remains very difficult to achieve, so it’s thrilling to be able to have a crack at it.”

On the line in the early hours

It was at 15:00 UTC that Franck Cammas, Charles Caudrelier, Morgan Lagravière, Erwan Israël, Yann Riou and David Boileau, escorted by the members of the team and cheered on by their families and friends, slipped the lines holding the Maxi Edmond de Rothschild to the shore. Aboard the latest of the Gitanas, the six sailors that are a part of this planetary venture, hoisted the sails of the oceanic charger and set a course for the north-west tip of Brittany, which they should be quick to reach. They are due to cross the line offshore of Le Créac’h lighthouse on Ushant between 23:00 UTC this Saturday and 03:00 UTC on Sunday.

The members of the crew share their pre-departure impressions:

Erwan Israël: “I’m very content. We’ve been waiting a long time to set sail again after our little escapade in November. We had to repair the boat and then the weather for the Jules Verne Trophy is always the same with potential windows which open and close back up. It’s really satisfying to leave, especially given the fact that we have fabulous conditions for heading out to sea. We’re very happy.”

Morgan Lagravière: “We’ve been patiently awaiting this departure. These moments are never easy, but I’m very happy to have this weather opportunity opening ahead of us and giving us a chance to live out our dream and our adventure. In a few hours’ time we’ll leave Ushant, set sail across the ocean and we’re unlikely to see any land again for quite some time. It’s no trivial matter and I’m expecting it to be a remarkable journey. I’m keen to make the most of it and to do what we’ve been training for over a number of months with this record in mind and with the goal of improving on Idec Sport’s time. We’re sure to experience a whole range of emotional states during the race, with some positive moments and other times that will be more difficult. After the emotion of the start, I’m eagerly awaiting the first hours of sailing and the first watches as we make the switch to race mode and competitor mode. It’s a process which enables you to make the most of every moment whilst pushing the envelope.”

David Boileau: “Right now I feel a sense of release. We had quite a quick initial departure, then a return to the dock followed by around a fortnight of repairs to the boat and in the end a long wait with the constant uncertainty of whether or not we would be setting sail during the festive period. Today, we’re happy to be able to take this window. The standby and the waiting are part and parcel of record attempts, it’s the name of the game with these things!”