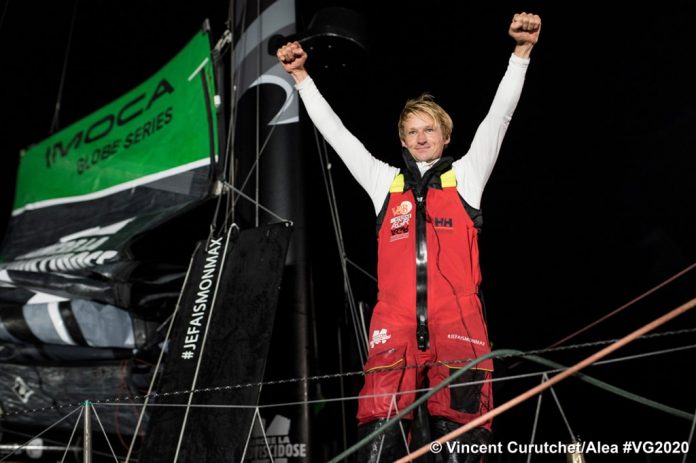 Bringing the ninth edition of the Vendée Globe to an incredible crescendo eight competitors arrived back in Les Sables d’Olonne within 23 hours and 44 minutes.

With a record entry of 33 boats and an atypical sequence of weather systems which meant the top 10 or 12 boats regrouped and re-started on three main occasions, the race went down to the wire with five boats pitching for the podium places at 36 hours from the finish.

Three skippers carried time compensations, Boris Herrmaann, Yannick Bestaven and Jean Le Cam. And it was only on Thursday evening when Le Cam finished that the  final rankings were settled. Bestaven with his 10hrs 15mins of allotted time won, Dalin – who crossed the line first was second and Louis Burton third and behind them – finishing over the next 48 hours great sailors without whom the race would not have been so enthralling.

Who could have guessed on 30th November that the search and rescue operation for the skipper of  Kevin Escoffier would affect the final outcome? Jean le Cam, Sébastien Simon, Yannick Bestaven and Boris Herrmann went to the aid of Kevin Escoffier, whereas the leaders, Charlie Dalin and Thomas Ruyant were too far ahead to be called on. The redresses awarded by the Jury and the weather patterns meant that it would be a closely fought contest to the finish.

Between Wednesday and Thursday evening the first eight boats finished within 23 hours and 44 minutes, compared to a gap of 19 days and 19 hours back in 2016 between the winner Armel Le Cléac’h and the eighth placed boat.

Yannick Bestaven became the overall winner of this ninth edition. He impressed with his ability to drive hard, fast and consistently in the south and again on the final sprint with a perfect layline, but also with his sincerity and sportsmanship ashore, when he declared alongside Charlie Dalin,

“There are two winners in this Vendée Globe.”

Dalin the skipper of Apivia took line honours, after leading the fleet for almost half the race, but would end up officially ranked second missing out on overall victory by less than three hours.

The final place on the podium went to Louis Burton, who showed total commitment and determination aboard the boat that won the race in 2016.

The race will also be remembered for the heroic rescue of Kevin Escoffier by Jean Le Cam, who ended up in fourth place when his redress was calculated. At the age of 61, he has lost none of his skills as a competitor. There was a major scare for German skipper, Boris Herrmann a few hours before the finish, when he collided with a fishing vessel. Shortly before the incident, he had still been in contention for overall victory after a consistent and steady race, which saw him permanently up with the frontrunners. To suffer what he did after such a beautifully executed programmed race once again showed the cruel side of the Vendée Globe.

In sixth place, Thomas Ruyant was the loser in the rankings, as this position does not really reflect his performance out on the water. The skipper of LinkedOut spent two-thirds of the race in the top three, in spite of breaking his foil before entering the Indian Ocean. The disappointment will be difficult for him to overcome, particularly after the strength of the performance of the skipper from Northern France, who certainly left his mark on this ninth edition.

The two times paralympic champion Damien Seguin took seventh place and impressed everyone adding another line to his list of achievements. Born with just one hand, he wanted to prove that everyone should attempt to make their dreams come true.  Finishing in eighth position, Italian skipper and former philosophy lecturer, Giancarlo Pedote now based in Lorient, Brittany, achieved the best performance ever for an Italian in the Vendée Globe and was able to express his competitive edge throughout the race.

Finally, local hero, Benjamin Dutreux returned home on Friday morning to finish ninth, less than 24 hours after the arrival of the first boat in this exceptional ninth edition, and today Maxime Sorel brought V and B Mayenne home in tenth, a 2007 build boat which started twice previously but only finally completed the full Vendée Globe course non stop for the first time today.

Finishing just before 5am this morning 2 days, 10 hours, 45 minutes and 29 seconds after Yannick Bestaven’s corrected time, Maxime Sorel (V and B – Mayenne) took 10th place in this Vendée Globe. Four years ago, the 10th place was Arnaud Boissières, who arrived 32 days after the winner, Armel Le Cléac’h. Of course the 2016-2017 edition was exceptionally fast at the top of the fleet but eight years ago, Tanguy de Lamotte was also 10th and took 20 days longer than François Gabart, and that Raphaël Dinelli needed 41 more days than Michel Desjoyeaux in 2008-2009.

That V and B – Mayenne completed a non stop lap is finally a comfort to previous owners perhaps. Launched one day in September 2007 not with champagne but with milk the sponsors were Groupe Bel. But the cow did not laugh often. Kito de Pavant (Groupe Bel) retired at the same time as Bestaven did – hours into the 2008 race dismasted in a Biscay storm. And in 2010 it made it to just west of Cape Horn in the Barcelona World Race when the keel bearings failed and De Pavant and Seb Audigane had to retire. And it was the boat which Thomas Ruyant (Le Souffle du Nord) nearly lost in 2016 after hit an object near New Zealand.

But Sorel still had problems with the boat – retuning to Les Sables d’Olonne today he revealed a big composite repair he had made to the deck of the boat which was bult as a close sistership to PRB.

He outran a Biscay storm to make it home safely, reporting to his Press Conference this afternoon:

“The last 72 hours, it was a race against the clock. I made the decision on my own to go through this depression. The Race Direction warned me that it was bad, that there was going to be a lot wind and sea, that it was going to be difficult to cross the line and join the channel. There were a lot of things that made me want to wait, but I saw that it was passing, I wanted to finish too. I put all the things on the table, and I was like “I’m going” … and here I am. I pushed to the end, I was above my routings. I ‘was 105% of my polar! Unfortunately, I couldn’t see what I went through. I didn’t have time to think about my race.

The V and B – Mayenne deck cracked

“It’s true that at the time of the PRB sinking, I had that in my head. My boat is almost identical, PRB being a little lighter. And my boat had big problems in the last Vendée Globe 2016 Obviously I had that in my head and I couldn’t attack when I wanted in the deep south. Maybe if I had attacked more I wouldn’t be here today. When the deck cracked and I had to fix it, I did not really show it. And when I made the decision to pass ahead of the front I had to go hard to get home. If it ever broke I was close to land so it was fine.”

The civil and marine structures engineer Sorel admitted: “I knew when I left that I had an important mission: to finish. But finishing this Vendée Globe with this boat, which had quite a few setbacks in other races, is great. I inspected the boat a lot of times, my team helped me do it, we kept a spreadsheet to see what we had to check. Then one time I noticed a small crack in the paint, really tiny. And in fact I pass my finger over it and there was a dip. I immediately alerted my technical team who contacted the architects. They said directly “You have to open it up the first skin is broken, the foam too”. Major surgery had to be done to prevent the crack from spreading to the deck!

“When I found out what happened on PRB, it was hard to go through at sea. The race comes to a standstill because you know there is a guy all alone on a raft. We pushed less after that. It was a hard moment, at the start of the Great South, I dreamed of huge waves and long surfs. I did not want to plant the bow at 25 knots.”

The new 55-metre Al Waab II is the first superyacht to be launched from the new 2,000-tonne capacity ship lift, part of...
Read more

This list should be longer by September 22, the opening day of the show, with the participation of other stunning luxury vessels...
Read more
Load more