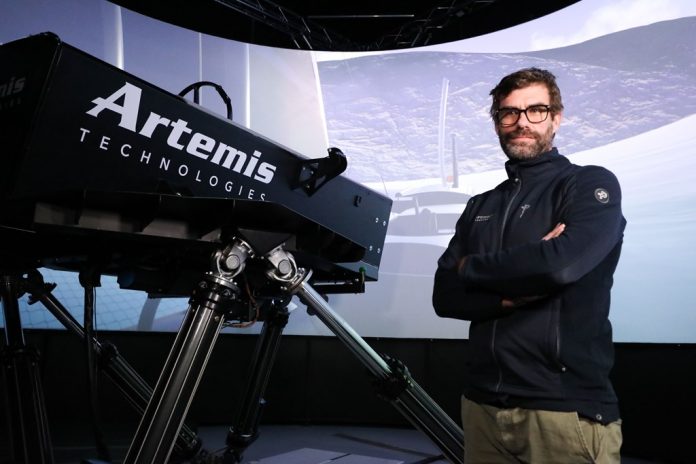 Artemis Technologies, which is leading a programme to develop a new class of zero-emission high speed vessels, has relocated its mechanical hardware in the loop (mHIL) simulator to Northern Ireland.

The mHIL simulator represents a multi-million pound investment over the past decade by Artemis Technologies and the Artemis Racing professional sailing team.

The company will use the mHIL simulator to streamline the development process and prototyping of the company’s Artemis eFoilerTM electric propulsion system and new green high-speed vessels, targeting the ferry and workboat markets.

Double Olympic champion Dr Iain Percy OBE, CEO of Artemis Technologies, revealed the installation of the simulator ahead of the upcoming world-famous America’s Cup yacht race, of which he is a four-time veteran.

“We originally built the simulator for Artemis Racing taking part in the America’s Cup, and are hugely excited to bring this incredible technology to Northern Ireland. There is nothing else like this in the world, it’s the most advanced of its kind, and it’s right here.

“Behind the device is all our collective learning, over 10 years and hundreds of millions of pounds in investment, learning about the marine environment and how vessels operate in that environment.

“The result is when we want to test something new, like a zero-emission vessel, we can confidently do that.”

The mHIL simulator features a 4.5 metre high, 210 degree screen, which conveys images from three laser phosphor projectors, wrapped around a physical platform similar to those used for flight and motorsport simulators, providing an incredibly immersive experience.

It forms part of Artemis Technologies’ roadmap to creating a high-tech maritime innovation hub in Northern Ireland and will be an integral part of the digital twin of the zero-emission workboat and ferry projects with support from the Belfast Maritime Consortium.

“With the Belfast Maritime Consortium, we are trying to create a number of world’s firsts, the first ever zero-emission high-speed fast ferry. As this has never been done before, by definition, you need a digital twin.

“It is a representation of all the same physical forces you experience on the water, including the wind, the waves, the boat itself, and how it performs.

“Out of that, we create a digital environment where we can test new equipment, we can train crew and improve the whole system, without actually having to build anything.

“The net result of a digital twin manufacturing environment is huge productivity gains. Where you used to have to produce a number of different prototypes followed by learning from your mistakes, now you can literally test tens of thousands of prototypes in the digital world to arrive at the optimal solution, before you have to make anything physical. The power of the digital twin is lower cost, better product, reduced waste, in a shorter time.”

The mHIL simulator will continue to be used by high-performance professional sailing teams from across the world and is expected to attract interest from the commercial maritime sector.

“It’s going to bring in a lot of interest from outside and a lot of commercial activity. When you have a piece of equipment that gives such an accurate representation of the marine environment, other companies will want to test their own ideas.”

Hydrosphere, it turns your superyacht into an underwater aquarium

Seafarers may soon have an exciting new way to view the world beneath the waves. Gresham Yacht Design has unveiled a remarkable new concept...
Read more
Technology

Brunswick Corporation (NYSE:BC) today announced a major expansion of its i-Jet Innovation Lab at the University of Illinois to support an acceleration...
Read more
Technology

As a result of a 4-years collaboration with Mercury Marine, ZF is now presenting the industry first 2-speed transmission for outboards. Production...
Read more
Technology

Enel X and Fincantieri have signed a letter of intent to work together on building and running next-generation port infrastructure with a...
Read more
Technology

The following is the keynote address delivered by Baird Maritime co-founder Dr Neil Baird at the fiftieth anniversary virtual symposium of the...
Read more
- Advertisment -