Kathleen Gillett: This gaff-rigged ketch circumnavigated the globe and sailed in the first Sydney-Hobart race. 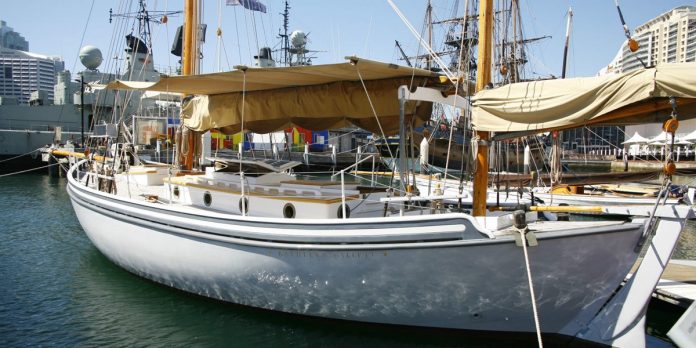 This gaff-rigged ketch was built for Sydney marine artist, Jack Earl to sail around the world.

A founder of the Sydney-Hobart yacht race, Earl sailed Kathleen Gillett in the first race in 1945. 2 years later, the ketch (named after Earl’s wife) circumnavigated the globe, only the second Australian yacht to do so.

Kathleen Gillett‘s venturesome career later included island trade and crocodile-hunting expeditions. In 1987, she was found in Guam and bought by the Norwegian government as a bicentennial gift to Australia.

Norway’s Bicentennial gift to Australia celebrates a fascinating link between the two nations. In the mid-19th century Colin Archer, a Norwegian of Scottish descent, was a pioneer farmer in Queensland before returning to his homeland in 1861 to become Norway’s best-known naval architect. Colin Archer was renowned for his seaworthy fishing, rescue and pilot boats and Kathleen Gillett is based on his designs.

The famous double-ended ketch was built for Sydney artist and sailor Jack Earl and his wife Kathleen by Charles Larsen, who worked from Colin Archer drawings to develop a world-cruising yacht worthy of the Norwegian designer. While the double-ended hull has been a Scandinavian boat-building tradition since Viking times, Colin Archer applied his own theories of hydrodynamics to this form to produce sailing craft which became known for safety in heavy seas. These qualities were valued by many ocean yacht-cruising enthusiasts.

Built over six years as funds were available, Kathleen Gillett was launched in March 1939 and named after Jack Earl’s wife. Rigged in 1941,  the boat was home to the couple and their children during the war years, and was also used for NSW coastal patrol.

On 26 December 1945 Kathleen Gillett sailed in the first Sydney-Hobart Yacht Race – an event organised by the by the Cruising Yacht Club of Australia which had been recently formed by local yachtsmen including Jack Earl. In June 1947 Jack Earl and crew set sail to circumnavigate the world in Kathleen, the second Australian yacht to complete this feat.

Accounts written by mate Mick Morris and illustrated by Jack were published in Seacraft magazine as they rounded the Cape of Good Hope to South America, sailed through the Panama Canal and crossed the Pacific to New Zealand. When they returned to Australia in December 1948, they were given a tremendous reception. After being sold by Jack in the 1950s, Kathleen‘s adventurous career included island trade in Torres Strait and crocodile-hunting expeditions around Bougainville and the Solomon Islands.

In 1987 the ketch, much changed from its original specifications, was located at Guam and purchased by the Norwegian Government as a Bicentennial Gift to the people of Australia. Kathleen was shipped to Sydney free of charge by Zim Shipping Australasia Pty Ltd, for restoration by Norwegian-descended boat builder Carl Halvorsen. The work was based on photographs and conversations with Jack Earl, and plans drawn up by Alan Payne and Partners.