The largest collection of J Class yachts yet – seven of the now nine strong J Class fleet – raced during the America’s Cup in Bermuda.

It is a sight many sailors have looked forward to as much or even more so than the America’s Cup itself – Seven J Class, the largest fleet to ever assemble in the 87 history of the class, raced in their own regatta either side of the first weekend of the America’s Cup finals.

A combination of having some of the world’s best photographers here and the J Class racing on translucent turquoise blue seas means the resultant photographs (below) make for a visual treat.

Lionheart scored a first and second on the final day to win the J Class regatta, which concluded in a light breeze off the north coast of the island. It was reduced to a two day, five race event after Friday’s racing was canceled due to light wind.

The fleet was also without its newest member Svea for the final three races, after she suffered rig damage durig the second race (pictured below). But the crews at the prize giving were all delighted with how close the racing was in the light, flat water conditions – a fleet divided and decided literally by seconds. 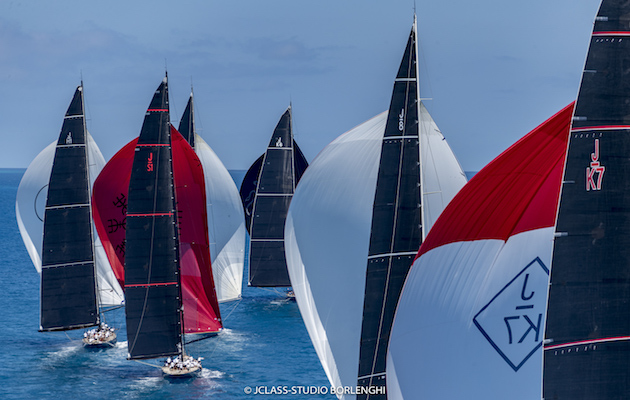 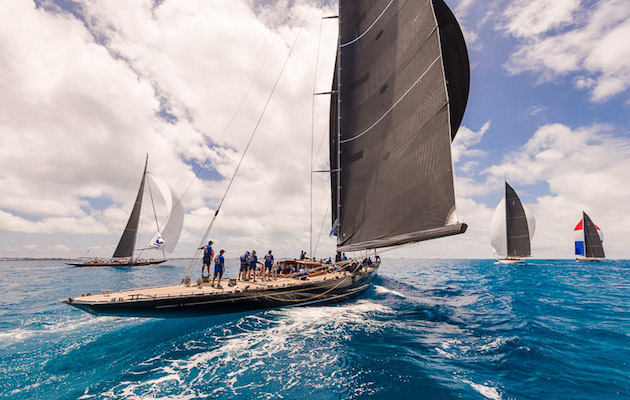 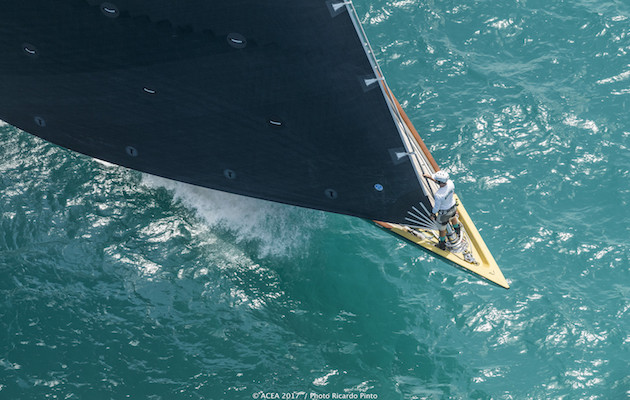 The precarious pointed bow of a J Class highlights the skill of the bowman. Topaz on the greener, clearer waters of the Great Sound – Ricardo Pinto 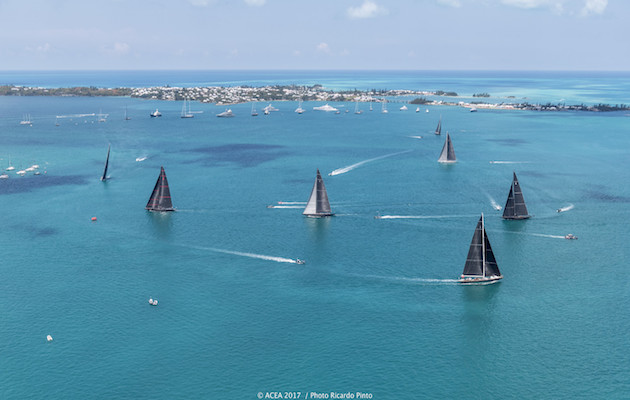 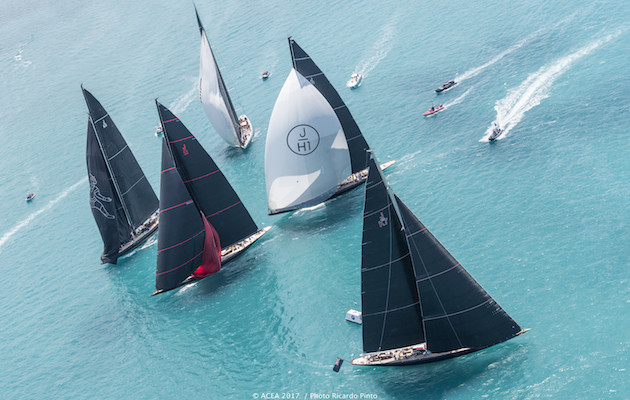 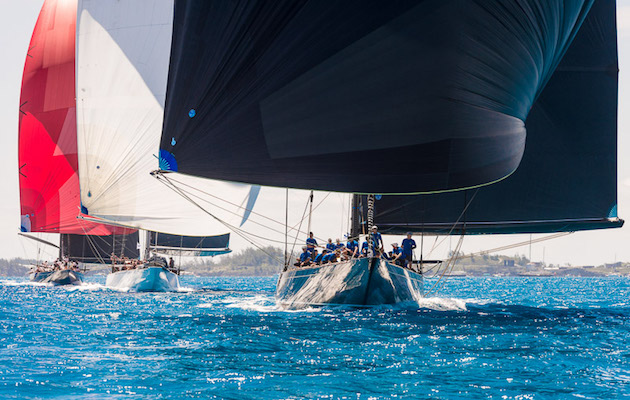 Hanuman leads Ranger and Svea during the first day of the windward/leeward J Class Regatta. The final results came down to seconds. Chris Cameron 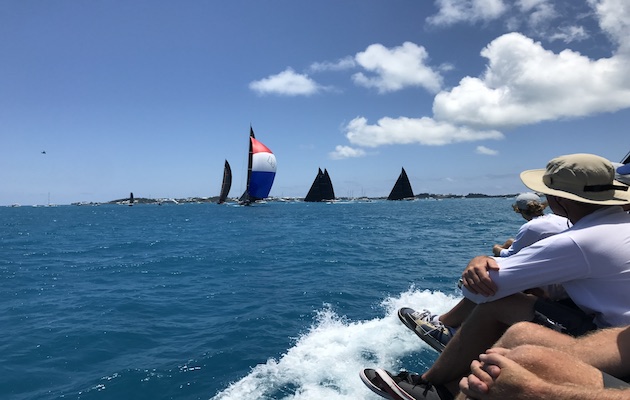 The view from the weather rail of Shamrock as the six other Js round the mark ahead, Velsheda leading. The smaller Shamrock can only try and compete with the others on handicap. 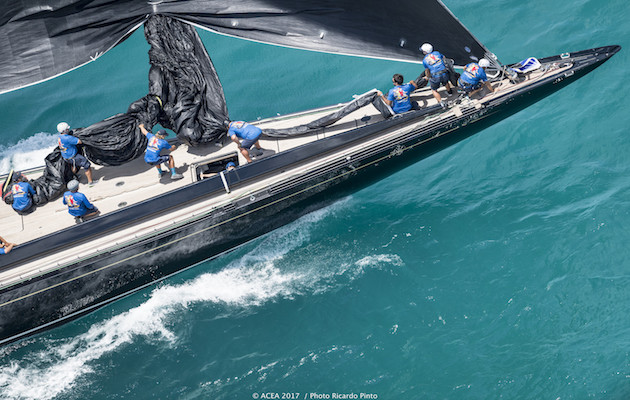 Preparing to hoist on the foredeck of Hanuman. She has been highly optimised and is the only J to use a snuffer to allow faster kite drops on mark roundings. Ricardo Pinto 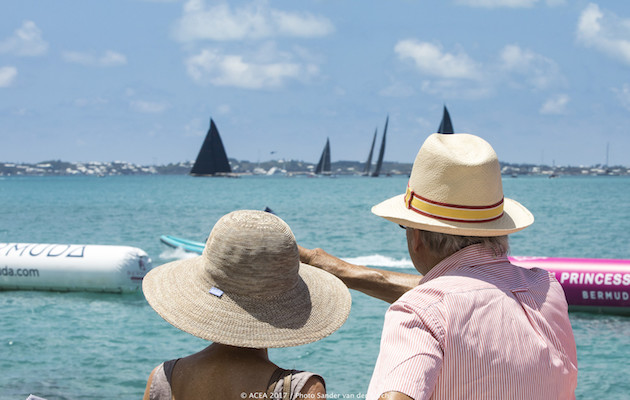 The view from the America’s Cup village as the J Class perform their exhibition race. Sander van der Borch 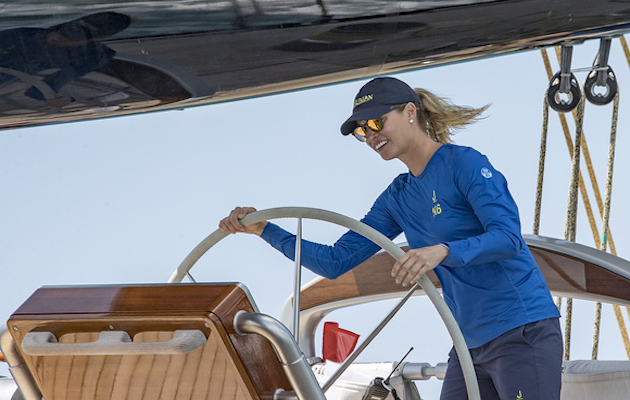 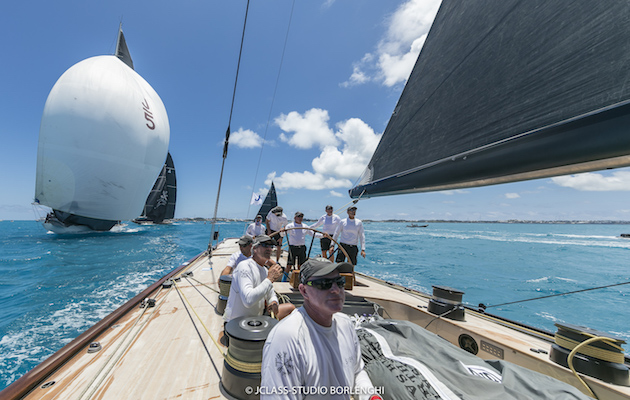 Onboard the newest J Svea, with her clean deck layout and extra large wheel, with Ranger and Hanuman chasing – Studio Borlenghi 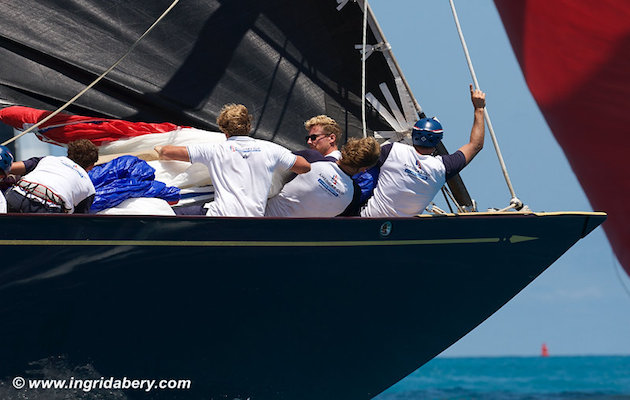 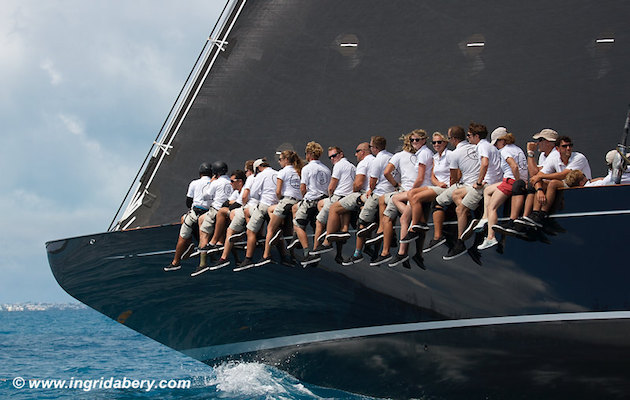 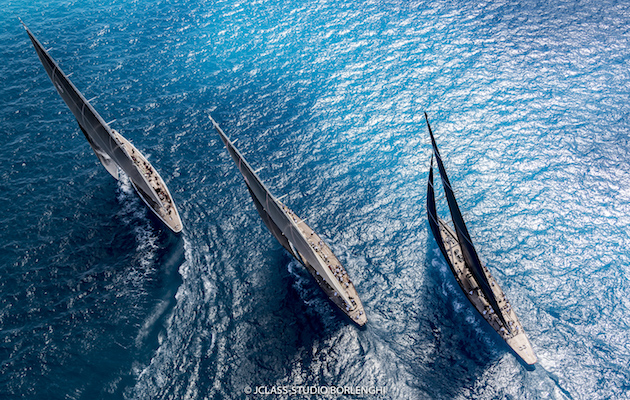 The seasoned competitors Ranger (left), Velsheda and Lionheart find their lane at the leeward end of the line – Studio Borlenghi 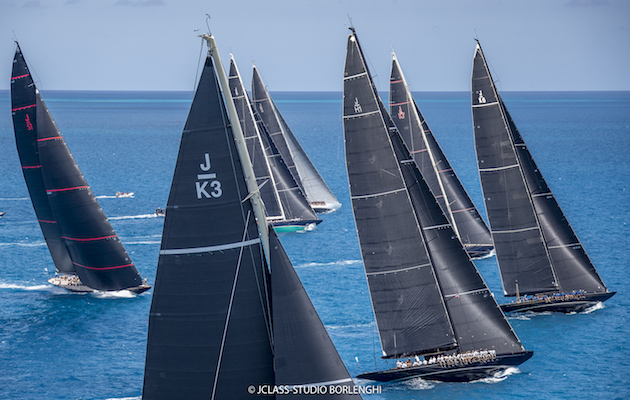 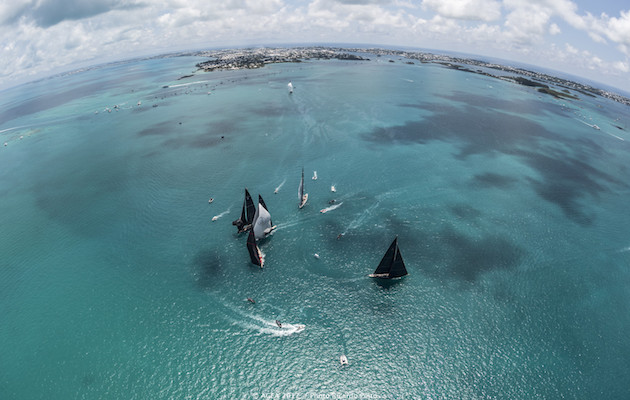 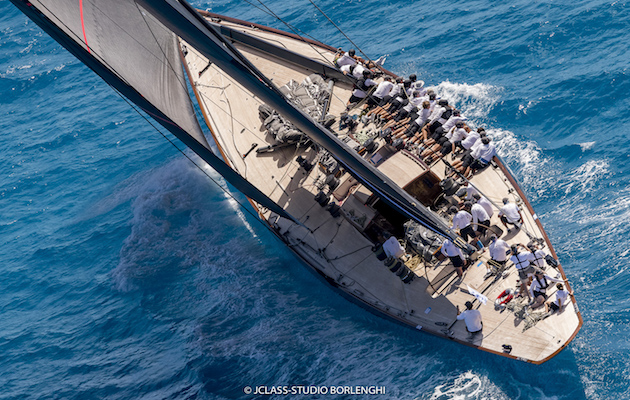 The newest J Class, a Hoek rework of a Tore Holm design, looked superb in her first regatta and was going well until she suffered rig failure (below) in her second race. Studio Borlenghi 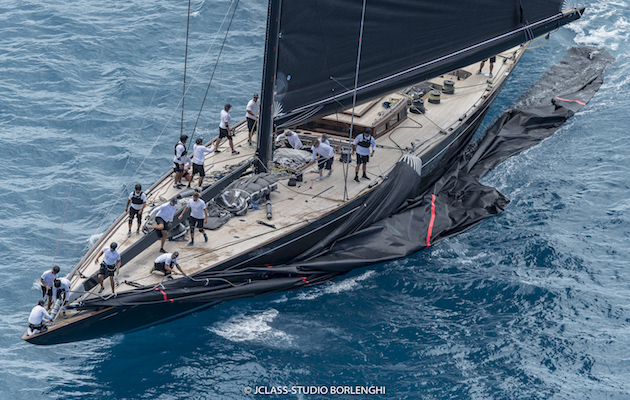 There was a loud bang as Svea approached the top mark – the headstay swivel broke and the stay and genoa collapsed. The crew reacted quickly to release the mainsheet and runners and crank on halyards to the foredeck to keep the mast standing. It is hoped Svea will be fixed in time for the J Class Worlds in Newport in August. Studio Borlenghi 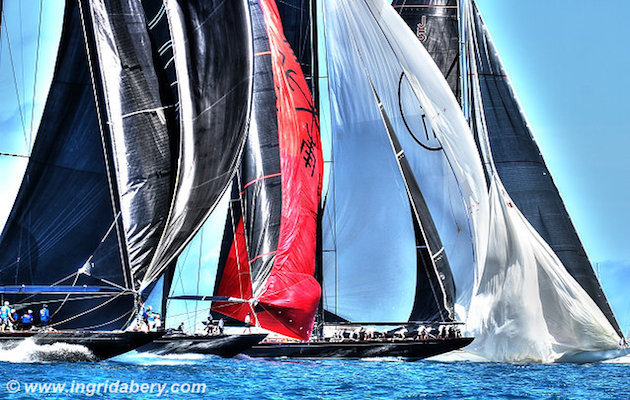 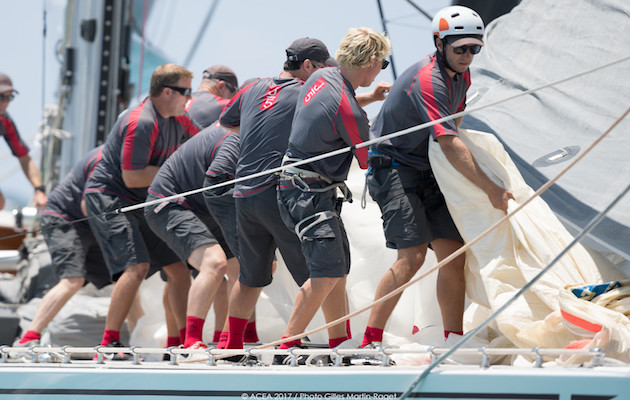 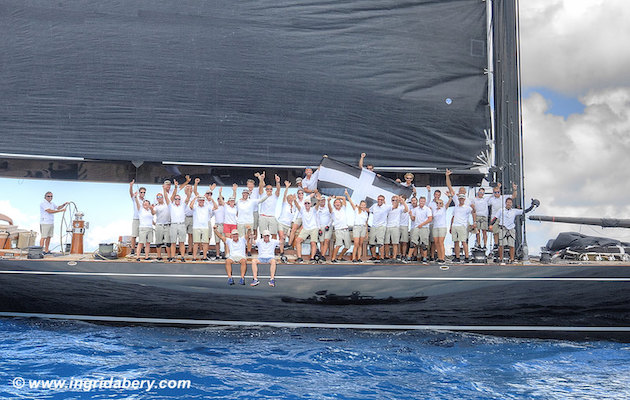 Following a poor start and a tense finish to the last race, Lionheart wins the America’s Cup J Class Regatta. It marked triple success for the JH1 team in Bermuda, after also winning their class and the overall prize in the Superyacht Regatta. Some of her Falmouth based crew hoist the Cornish flag in celebration – Ingrid Abery