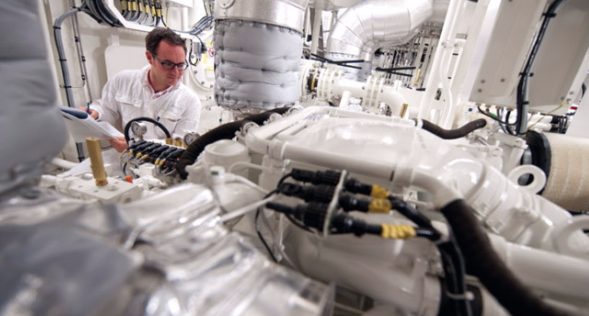 It’s now just nine months until the IMO Tier III regulations come into force for all vessels under 500gt, over 24m and those that will have had their keel laying after 1st January 2021. For vessels undergoing a refit, the regulation will also apply when an engine is replaced by a new one.

All vessels that fit into the above categories and that will operate in Nitrogen Emission Control Areas (NECAs) must be built to comply with controlled emission levels of nitrogen oxides (NOx). The NECAs include North America, US Caribbean, Baltic Sea and the North Sea.

Vessels over 500gt have had to comply with the IMO Tier III regulations since 2016, and this has been made possible through the installation of Selective Catalytic Reduction systems (SCRs) – an exhaust after-treatment used on ships by engine manufacturers including Caterpillar, MTU, MAN and Volvo.  Selective Catalytic Reduction works by reducing nitrogen monoxide (NO) and nitrogen dioxide (NO2) to Nitrogen (N2) in the catalyst using a reactant added to the exhaust gas mixture.

Unfortunately, these SCR systems take up a lot of space in the engine room. This is manageable for larger vessels, but now that the regulation will apply to vessels from 24m upwards, solutions for these yachts remain unclear.

In 2015, ICOMIA successfully delayed the controversial IMO Tier III regulations for sub-500gt vessels until 2021, and this was based on the technical, design and socio-economic issues associated with their implementation. However, in 2019, when ICOMIA fought for a second delay, this was rejected by the IMO.

Now that the deadline is almost upon us, with no sign of any further extension, is the industry ready? “In 2013, when the regulations were first discussed, the industry began preparing – from the engine makers to the exhaust gas after-treatment specialists, but then there was a delay which resulted in the IMO Tier III regulations only being applied to yachts over 500gt,” says Carlo Bertoglio, general manager at Hug Engineering Italy. “In my opinion, during the delay, I think the wider industry stopped believing that the regulations were ever going to come into place.

“We need to design the best compromise between performance and durability in terms of catalyst and chemical composition…” – Carlo Bertoglio, General Manager – Hug Engineering Italy

“Personally, I believed that this was the future, and we worked hard in those five years for yachts above 500gt, but also to try and improve our solutions, to downsize our solutions for other vessels, and to push the design and the technology [of SCR] to the limit. We need to design the best compromise between performance and durability in terms of catalyst and chemical composition.”

Space, or the lack thereof, in the engine room is a serious barrier to the attempts to mass-populate SCR systems, but who should be making the compromises in order to fit these units? Bertoglio believes a solution can be found without having to impact the guest/owner space, or having to change the engine room layout to a certain extent, but for the vessels at the 30m mark and below, this achievement will be further in the future.

Rolls-Royce, for example, has been investing in marine-reciprocating engines with exhaust gas after-treatment technology, successfully constructing the MTU Series 4000 M05 (used in the yachting sector, predominantly by superyachts) which is IMO Tier III certified and successfully in service in combination with SCR systems.

“The main challenge is to adapt these solutions and make them fit for the sub-500gt segment,” says Tobias Kohl, senior manager yacht applications at MTU. “This process is not finished yet and a postponement of the regulation or an exception for a limited time would help the industry to make this feasible.”

Kohl explains that, based on the integration studies of several shipyards, it’s a big challenge to integrate the additional weight and volume of an SCR in a 30-metre design without compromising the usable space on board for the owner and crew. “Existing yacht designs have to be modified significantly to be prepared for the exhaust gas after-treatment technology.

“We must take into account the specific and unique requirements of the pleasure-yacht sector below 500gt which include demanding space restrictions for exhaust gas after-treatment systems, the use of highest-power density engines, application of specific propulsors and yacht operating profiles…” – Tobias Kohl, Senior Manager – MTU

“We must take into account the specific and unique requirements of the pleasure-yacht sector below 500gt which include demanding space restrictions for exhaust gas after-treatment systems, the use of highest-power density engines, application of specific propulsors and yacht operating profiles, maintaining identical performance characteristics as today’s IMO Tier II product, ensuring emission compliance in all worldwide environmental conditions and keeping [to] the emission limits over the engine lifetime.”

Therefore, with that in mind, what do shipbuilders think? “We are less than one year away from the enforcement, and my impression is that we are not ready,” says Paolo Bertetti, vice president R&D at Sanlorenzo. Bertetti agrees with Bertoglio that time is running out to find solutions. “When an engine is developed and is tested by engine manufacturers, this is the first step to suggest that everything works well,” says Bertetti. “Then what happens in, for example, the automotive industry, is a pilot application with a prototype that is tested for one year. You can then revise the finding and see if you are ready to start the delivery of mass-production.” This means that even if someone is able to deliver the first prototypes of either smaller SCR units or an alternative solution by the end of December 2020, the industry will have no time to test-run them and be confident that what is inside the yacht is working.

“The SCR is a catalyst, so to start the catalysing process you need to meet a minimum temperature of 250 degrees Celsius. This means that all the time the vessel spends below that temperature, which is in our case many hours, the SCR on board these smaller vessels is not working…” – Paolo Bertetti, Vice President R&D – Sanlorenzo

Bertetti highlighted another limiting factor in addition to the small space in the engine rooms of sub-500gtvessels. “The SCR is a catalyst, so to start the catalysing process you need to meet a minimum temperature of 250 degrees Celsius. This means that all the time the vessel spends below that temperature, which is in our case many hours, the SCR on board these smaller vessels is not working.” NOx is harmful, so the time when an SCR should be working most effectively is when a yacht is close to the shore, but this is when the temperature of the exhausts will be at their coolest because the vessel will be idling or moving at very low speed.

As well as the problem of the temperature, Bertetti explains that an SCR is a heavy part and a big tank full of urea, and you’re going to have 4,000kg of additional load on a 100ft boat. “We have worked a lot on this in the last 12 months, but unfortunately we can see some negative impacts in relation to the use of an SCR,” he says.

“If you consider the additional load, the increase in fuel consumption, and the emissions to produce urea and the additional fuel, at the end you’re going to release eight to ten per cent more CO2 in the air just in order to save some NOx. With a typical duty cycle of a 100ft yacht, you’re going to save half to one ton of NOx but release 20 tons of CO2, and from our side, that is not really a good achievement. While it is not up to us to decide if that’s good enough, we would prefer to have a system on board that is more effective in reducing NOx emissions without having the increase in greenhouse gas.”

Meanwhile, the industry could soon be adopting a system that is not suitable for the sub-500gt yachts. An SCR system may be well optimised for a ship, but it doesn’t seem to be the right one for yachts. Larger shipyards such as Feadship, which works on vessels above 500gt, have experienced their own problems with the SCR systems and consequently developed a technology called Oxywash. Bertetti hinted that Sanlorenzo and other yards have been looking at ways to adapt this solution – but it’s clear that more time is needed.