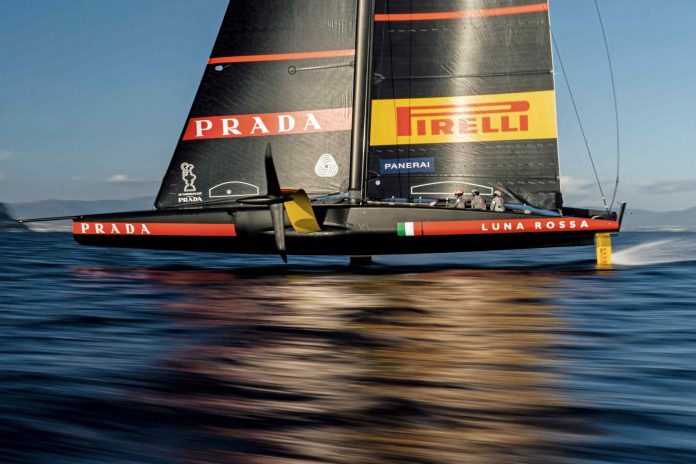 This year sees Prada launch its fifth challenge for the America’s Cup, and pouring multi-millions into the cause. But, as the Financial Time’s Grace Cook discovers, there’s more at stake than winning the trophy

“I christen you Luna Rossa!” shouted Miuccia Prada through a microphone, standing on a cherry-picker on the seafront in Cagliari last October. Huddled in the small box along with her husband, Prada chief executive Patrizio Bertelli, and a priest in full vestments – who had just doused the boat with holy water – she proceeded to smash a champagne bottle against the hull of Prada’s new €65m America’s Cup yacht, which was suspended in the air by a crane. The glass shattered and bubbles oozed down the side of the matte-black vessel – the boat’s baptism was complete.

With that, the 300-strong crowd who had gathered to watch went berserk. Cheers erupted, air horns blazed and water cannons exploded as the 75ft yacht was lowered into the water for the very first time. Bertelli – team principal of the Prada Luna Rossa crew – watched with bated breath, lest the yacht capsize. “I haven’t been on the boat yet,” he said, a look of palpable excitement spreading across his face. “Launching a new one is always exciting, but it’s particularly thrilling when it’s an unprecedented cutting-edge design like this.” The crane gave one final creak as the 6.5-tonne vessel was dropped onto the water, waves now lapping around its upright hull. Prada’s sailors on the shore let out a sigh of relief, but the ever-confident Bertelli insisted that he was “never worried” at the prospect. “I never doubted for one second that the boat would float. It’s the result of 78,000 hours of work,” he said, grinning.

Luna Rossa’s watery activities have resulted in a newfound focus within Prada HQ; ocean health and a mission to clean up the seas. The brand is ploughing multi-millions into its cause. It began last year with an overhaul of the fabrics within Prada’s supply chain. When Luna Rossa partnered with The Woolmark Company to create sustainable merino sailing kits, the Prada fashion brand debuted its Re-Nylon accessories line crafted from waste fishing nets recovered from the sea. Then, as the sailing team joined forces with One Ocean Foundation (a non-profit dedicated to the protection of the seas), the Prada Group took out a €50m sustainability-focused loan from Crédit Agricole, the first of its kind, which rewards meeting ambitious sustainability targets with lower interest repayments.

And Prada is pushing this message commercially. Last year, the defunct Prada Sports line got a reboot under the name Linea Rossa. Chunky-soled “America’s Cup” trainers and sleeveless grey windbreakers with retro Prada branding that look strikingly reminiscent of the team kits are designed to appeal to the demographic that might otherwise be shopping at Nike. Luna Rossa also has its own fragrance collection, which includes a scent called Carbon – an environmentally astute perfume name for our times.

This change of direction is thanks in part to 31-year-old Lorenzo Bertelli, son of Miuccia and Patrizio; he joined the group in September 2017 as head of marketing and communications and swiftly shook things up. “Being a millennial, I immediately realised that sustainability is a priority,” says the former racing driver. “Sometimes intersection [between our group activities] happens by chance, sometimes it is indispensable.” After years of falling sales, Prada has tasked Bertelli with ushering the 1913-founded family-run brand into the next era by harnessing the interest of younger customers – and sustainability is key.

Re-Nylon was the first project to which the young Bertelli committed. “It’s the beginning of a new era for Prada. Nylon was one of the fundamental products that established Prada’s modern fashion identity,” he says of his mother’s refashioning of the synthetic fibre in the 1980s, when she turned a formerly naff textile into a covetable luxury product by putting it on the runway. The collection of nylon backpacks, belt bags and totes introduced in 1984 quickly became the brand’s best sellers, and remain so today; Lorenzo says using marine waste nylon “respects the brand’s heritage while looking forward to the next chapter”.

Lorenzo also orchestrated a five-part documentary series to accompany the Re-Nylon launch that played on Instagram. What We Carry was filmed with National Geographic and sent five “Prada reporters” – including 20-year-old Sudanese model-of-the-moment Adut Akech – around the globe to investigate the plastic problem. It’s estimated that the cost of the collaboration ran into six figures. “It gave seriousness to the project,” says Lorenzo. “It’s essential to explain what is behind a product. To do it through a story online is the best way to engage customers.”

His investment paid off: in the third quarter of 2019, Re-Nylon backpacks were among the most popular accessories on fashion search platform Lyst. It’s good marketing married to a commitment – a percentage of sales of each Re-Nylon bag goes towards ocean-conservation projects. By 2021, all nylon used within Prada will be regenerated.

“You can’t ignore the plastic problem when you’re out at sea all day seeing it,” says 38-year-old sailor Shannon Falcone, who also heads up product design and innovation for the team’s uniforms – at 6ft 5in and 102kg, he jokes that he spends 50 per cent of his day at a desk and 50 per cent working out. “The ocean is our playground and our competition ground. And it’s where everything ends up.”

Falcone’s 26-year-old teammate Nick Brezzi agrees. “I go kitesurfing and see beaches full of trash, or junk being brought in on the waves – it’s impossible not to acknowledge that it is polluted. Guys like me are more keen to be environmentally friendly in everything we do. It’s not natural for my dad’s generation, but it is for us.”

It troubled Falcone that the team’s nylon kits (which release microparticles of plastic when washed) were contributing to the problem. He sought the help of Woolmark to come up with biodegradable, ocean-friendly alternatives, and this year the team will sail wearing merino wool for the first time. Woolmark’s traceable supply chain from sheep to sweater – and its work in promoting natural wool as a sustainable alternative to synthetic sports kits – meant the Sydney-based company was a natural partner for Prada. Woolmark is also working with Adidas to send Arctic explorers to the North Pole to investigate the effect of microplastics on the polar ice caps. “Merino is a renewable resource grown on fresh air, water and grass, and it offers a lot less impact compared to the devastation caused by microplastics,” says Stuart McCullough, managing director of The Woolmark Company, which developed new technical wools for the Prada kits.

The collection, unveiled last June at Pitti Uomo in Florence, includes matte-grey windproof jackets crafted from merino that has been bonded with a waterproof membrane, and super-fine, ultra-light T-shirts that fit like a second skin and dry quickly; a commercial collection will be released under the Luna Rossa brand this year. “Wool is the original performance textile,” says McCullough. “The fibre is breathable, with the ability to wick moisture during physical activity, which makes it ideal for sailing.”

Brezzi adds: “When we’re soaking wet, we’ve found wool is the only thing that keeps you warm. Synthetic kits make you freezing, which can be dangerous at sea.”

Falcone says he was initially “sceptical” about sailing in wool: “For me, wool was just the itchy jumpers my grandad wore. We’re athletes. Our boats go really fast. Aerodynamics, wind motion, waterproofness and weight all come into it.” He set about putting the wool to the test, inventing innovative ways to sample uniforms out of season. “We’d put the kit on and go and stand in a walk-in freezer or underneath a cold shower,” he explains. “If it fails in the shower, it’s not going to work on the boat. Kit really affects our performance.”

The level of fitness required for America’s Cup sailors is Olympic standard. “Grinders” like Falcone and Brezzi hand-power the boat’s hydraulics via pedal mechanisms and sheer upper-body strength. “We have to create constant energy – we’re like a diesel engine with a turbo,” says Brezzi, with biceps bulging through his woollen top. He says he can deadlift 100kg and bench-press 140. “The guys have to be big,” says skipper and team director Max Sirena. “In 2007, the race could take up to three hours. Now, to cover the same distance takes 30-35 minutes because the boats are so much faster.” Sirena has won two America’s Cups and reached the final a further four times – but never with Prada. “It’s like going 140mph on a motorbike. And the power comes from the guys.” They train at sea for six hours a day, so their kits have to withstand hours of exercise against the elements – during race season, they’re worn for weeks at a time.

Spending life at sea gives the sailors a unique vantage point on the plastic problem; when training, the Luna Rossa team often stages ocean clear-ups. “We’re collecting 50 kilos of plastic a time,” says Sirena. “The problem is huge.” Indeed. A boat belonging to one of the other teams was damaged during the trials after it collided with a large piece of debris in the ocean.

On the seafront base of Luna Rossa HQ, where the gym enjoys a sunset view, single-use plastics are banned – the stipulations of the Crédit Agricole loan demand that Prada implement green practices across its buildings to reduce its overall impact. Even the America’s Cup boat has its own credentials – 30 per cent of the carbon fibre used in the build is recycled, with metal hardware made from melted-down spare parts. “Obviously it costs more, but it’s a message we want to give,” says Sirena. “We are at the point of climate crisis where everyone has to do something. For us, that’s the uniforms, our recycling and our work with ocean organisations.” The team also goes into local schools to teach children about sustainability.

The work is far from done. “We are not the only hero on this planet,” says Sirena, jumping onto the monohull yacht as he and his helmet-clad team head out for a day’s sailing, the 26.5m Prada sail billowing in the breeze. “But Prada is a global influencer. By using the power of our brand name, we can speed up the conversation. Because our office is the ocean,” he gestures to the turquoise waters surrounding him that will soon become his racing ground, “and we have to protect it.”