An Indonesian cruise pushing the edges of experience 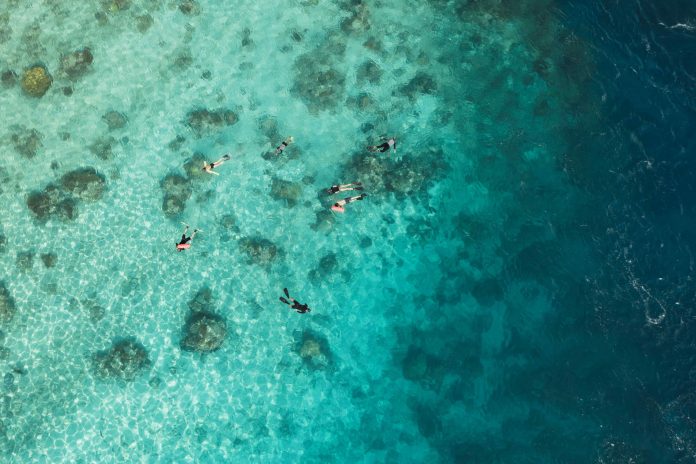 With 15 cabins, an expedition yacht’s range and a serious conservation brief, Aqua Blu is the new star of Indonesian waters. Maria Shollenbarger joins its maiden voyage

The Seventeen Islands Marine Park in eastern Indonesia isn’t a national park per se, nor does it consist of 17 islands. It sits inside a larger, semi-protected marine reserve whose boundaries seem a bit of a mystery; the islands, depending on who you talk to, actually number between 20 and 23. What the place lacks in clarity of nomenclature, though, it more than compensates for in sheer beauty. Some of the islands are little bigger than tennis courts, sprouting cowlicks of coco palms; others are volcanic mounds measuring acres across, circled by bright-white sand beaches. Their scrub and mangrove forests teem with eagles and fruit bats and flying foxes; they’re said to also harbour mbou, a cousin to the famous dragons of the Komodo archipelago, located 150km to the west. The waters all around are shallow planes of turquoise and green, shimmering with corals in surreal desert-garden colours.

But what was most alluring about this non-park park when we rocked up last November was the fact that there wasn’t another soul, and certainly not another non-local, around. On Aqua Blu, the expedition yacht whose inaugural voyage I had joined, only two of the 25-strong, mainly Indonesian crew had ever been here before.

Boating in Indonesia has become one of the signal soft-adventure experiences of the past decade. People from across the planet fly into the frontier-esque ports of Labuan Bajo and Sorong to charter phinisis, the wooden sailing ships traditionally built in southern Sulawesi by the Bugis tribe and today upcycled with comfortable berths and amply provisioned wine cellars. They drop anchor in one of the inky bays of the Komodo archipelago to view the dragons and snorkel off Pink Beach; they sail beneath the jungled peaks of Raja Ampat, in the remote far east of the country, in search of naturalist/explorer Alfred Russel Wallace’s elusive Paradisaeidae birds. Or they trace the navigations of the Dutch, Portuguese and English navies that vied for spice-trade dominion over the islands of the Banda Sea in the 17th and 18th centuries.

The Komodo archipelago received more than 175,000 visitors in 2018. And the local regency’s government, which debated closing Komodo island to tourism for conservation, has more recently floated the idea of a $1,000 “membership” fee to visit. Hence, Indonesia has emerged as something of a forcing ground: how to cultivate solitude and a sense of adventure in a place that’s officially discovered? To stay ahead of the answers, the vanguard of the niche cruisers down here must push the edges of experience.

Aqua Blu, a 15-cabin expedition-class yacht, is the newest, and newsiest, to enter these waters. Francesco Galli Zugaro, the CEO founder/owner of Aqua Expeditions, started out 13 years ago on the Peruvian Amazon, raising the bar on the cruise experience there with two sleek, contemporary 20-cabin riverboats and laying on naturalist guides and delicious cuisine. He similarly upped the ante in Vietnam and Cambodia when he launched Aqua Mekong in late 2014.

Given his CV, Galli Zugaro was never going to enter the Indonesian market in the middle. The 60m, five-deck Aqua Blu can legitimately claim a few firsts. It’s the first and only expedition yacht in Indonesia operating year-round that offers single-cabin bookings. It’s the first single-cabin boat with the reach to combine the country’s major sailing regions: the open-water crossings are made eminently comfortable thanks to its Quantum Zero Speed stabilisation technology. It’s the first and only passenger yacht to have regular scheduled departures to the Spice Islands every year (in October and November). And it’s the first regional operator with a specific agenda to advance conservation in the national parks and protected areas in which it operates.

Galli Zugaro and his team have spent three years exploring villages and volcanoes, coral reefs and secret beaches, mangrove forests for kayaking, and mountain paths for biking across 2,500km of the country. He’s done it all in service to what, if he succeeds, will eventually be some of the most off-piste itineraries available here.

Aqua Blu left Bali six days before I boarded it, with a send-off lecture by Lawrence Blair, the documentary filmmaker whose five-part Ring of Fire introduced Britain to the powerful mysteries of Indonesia’s 17,000-plus islands in the 1980s. It then proceeded through West Nusa Tenggara, stopping for hikes and waterfall swims on Moyo island and recce-ing dive and snorkel sites along the coast of Sumbawa, where its guests – I was later consumed with envy to learn – swam with two inquisitive whale sharks for almost an hour.

When I pulled into Labuan Bajo’s now busy, buzzy port for my embarkation, it was nowhere to be seen. This was by design; part of the joy (and capital) of such a boat is that it can get, and stay, well away from the fray. A 250hp skiff sped me quickly into open water. My first glimpse of Aqua Blu was almost an hour later; it was anchored in total solitude, against the backdrop of bizarrely beautiful Komodo island – all rounded, sunburnt red-brown hills and improbably tall, lush palms reminiscent of Dr Seuss’s Truffala trees in The Lorax. Because it was quite late in the season, this inaugural cruise was technically a repositioning trip – one of the between-regions navigations the boats down here make, travelling eastward in the autumn and westward in the spring, always ahead of the big rains. And usually sans paying clientele. But Galli Zugaro understands the appeal for his guests of being part of his team’s reconnaissance in these early days of operation – particularly on a boat that can offer smooth passage anywhere it goes, and particularly on one actively looking for ways to create community and conservation initiatives along the way.

And the 16-odd guests, hailing from as far afield as Norway, Australia and Mexico, were all game. They encountered the prehistoric dragons not on Komodo itself but in the deep folds of Horseshoe Bay at the far south end of Rinca, the archipelago’s second-largest island –where far fewer people go and the dragons descend directly onto the beach. (While his guests marvelled at them, Galli Zugaro was instead clocking the alarming amount of plastic refuse that ocean currents deposit along the bay’s edge. He met that same afternoon with the local WWF branch and regency officials; within two days, a partnership was official – Aqua Expeditions will fund and create support for comprehensive clean-up and recycling programmes for the entire island.)

For six days we navigated eastward through Nusa Tenggara. On Flores, we walked 3km through the sleepy village of Riung with one of its elders, who parsed its Christian-Muslim history with our head guide, Caz, as interpreter. Schoolgirls in immaculate blue-and-white hijabs buzzed by us on mopeds, some flashing peace signs and shy grins. He took us to Riung’s oldest ikat weaver; grey-haired, small as a sparrow, she sat winched into her loom. We walked up a low slope to see the village’s lonely church, built by the Dutch 100 years ago. Its original, beautiful timber roof trusses were still intact, covered by sheets of tin; Caz told us the design was inspired by the hulls of the local fishing boats.

Later that afternoon we headed out in the tenders with Aqua’s dive and snorkelling guides, checking out sheer walls and shallow reefs. Even in reconnaissance, the pickings were abundant (no surprise, really; eastern Indonesia has some of the most robustly healthy corals on earth). Turtles and sharks, scorpionfish and moray eels, rays of all sizes and dozens of technicolour fish were par for the course.

And so it went, blissfully. In the mornings, those who didn’t dive could explore pristine shores by kayak or snorkel their own reefs. In the late afternoons, pop-up bars materialised on powdery beaches or faded driftwood jetties for sundowners. We took the tenders to Pulau Palu, an island that’s an active volcano with a tiny village of 50 families living at its base; they hadn’t been visited by a tourist of any kind for several months. The children ooh’d, aah’d and shrieked with delight as Aqua Blu’s resident photographer navigated his drone along the beach, zooming and swooping above their heads.

Each late morning or afternoon we would return to the Aqua Blu, sweaty and dusty or soaked and salty, to fresh, extraordinarily good lunches and dinners: grilled barramundi and salads, poke bowls we assembled at the bar, slow-roasted lamb and brioche pudding. The consulting chef, an Australian called Ben Cross, presides over three of Bali’s top restaurants, and did stints at Michelin-starred venues in Sydney and Catalonia. Cross and his team have spent almost as much time as Galli Zugaro has traversing the country, sourcing fresh, organic produce and fish wherever possible and setting up sustainable provisioning systems when it’s not.

Nor does the boat skimp on style. Throughout the salons and dining room, antique prints, artefacts, textiles and an extensive library all reference the history of Indonesia; even the exquisite porcelain dinnerware, commissioned from a Bali-based Italian ceramic artist, features insects and flora from Alfred Russel Wallace’s own drawings.

There’s something to be said for finding such worldly beauty in coordinates so removed from the day-to-day world. When I disembarked in Maumere, another charmingly ramshackle port town, a combination of regret and envy constricted my chest. I was leaving early; Aqua Blu would proceed east, into the Forgotten Islands and up to tiny, mythical Run, the former nutmeg plantation traded by the English for Manhattan in 1667. The ride would be smooth, sleek and utterly 21st-century. But the adventure – a solitary boat, going to places the others can’t – would be as old as Indonesia itself.