The Changing Face of Boat Security 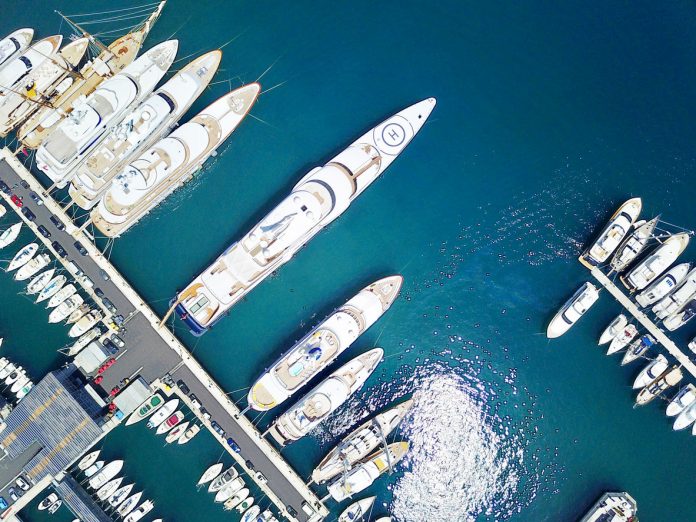 Lumitec’s Power Line Instruction technology, a Mastervolt intelligent power management system, a Yamaha Y-COP theft deterrent and GOST security installations. The company transferred the boat to a Delray Beach, Fla., facility where — a week before IBEX — it was stolen.

Lumitec president John Kujawa awoke to a flurry of texts from GOST notifying him that the boat’s geofence had been breached. He logged into the tracking interface to find what he called a “sickening breadcrumb trail of the thieves heading south.”

The on-board security system provided high-resolution video of two of the thieves, and Kujawa posted it on social media. The post went viral and, within 36 hours, a follower posted a photo of the boat wedged between two charter buses in Miami. He wrote, “I found ur boat!”

It’s an all too common tale of theft today, one whose digital ending would have seemed unthinkable a generation ago. With all the gadgets and gizmos in our lives, we take for granted technology that has evolved substantially in the security marketplace — and that is continuing to evolve not only through new hardware, but also through breakthroughs in data mining and processing. What’s emerging today will be standard tomorrow, with security companies and products evolving to do more and different tasks.

More often than not, it’s the electronics and engines — not the boat itself — that are the targets when boats are stolen. “That’s what’s driving the theft,” Harper says. “The boat doesn’t go far; it just goes far enough for thieves to strip off electronics and outboards.”

Outboards are such a hot commodity that when authorities are in pursuit of a stolen boat, thieves will act as human shields so a gunner can’t shoot out the engines to stop the boat, says GOST president and CEO Jay Keenan.

There has been consumer outcry for engine and electronics manufacturers to step up internal security systems, but that approach is complicated, Harper says. “These are potentially complex and expensive approaches that do not enhance the boat or the boating experience,” he wrote in a white paper. “In fact, they could drive up costs and complexity, and actually deteriorate the experience.”

Siren and GOST both try to enhance the boater experience, rather than detract from it. The companies focus on prevention using geofencing, notifications and alerts, as well as alarms and motion sensors. “The first generation back in 2005 could take up to 16 zones or sensors. Then we went to 32, then 64,” Keenan says. “Today, we can do up to 192 sensors if customers need it.”

Basic tracking systems exist for something as small as a PWC, while yachts use “cloaking systems” with acoustic deterrents and synthetic DNA fluids that leave residue on the thief, but not the vessel. “From the beginning, we had different options for different size vessels,” Keenan says. “As our systems have advanced, the size of vessels and capabilities have greatly increased.”

Siren began with systems meant to monitor the bilge and battery, then made security systems for 25- to 55-foot boats. The company uses a 3G cellular connection and switches to satellite when cellular connectivity is unavailable. For smaller boats, Siren pulled out a subset of features to create a more economical system.

After noticing that Siren’s MTC (monitor, track, control) systems were increasingly popular among pro anglers, Bass Cat Boats announced it would make them standard on its high-end Jaguar models. Anglers realized the benefit of not having to worry that an extension cord might become unplugged (leaving them with an uncharged trolling motor on tournament day) or that their rod locker had been pilfered.

“The bass-boat market isn’t a place where I thought we’d see much penetration for the next few years, but it’s really become a big focus,” Harper says.

Customers have become accustomed to tracking their homes while on vacation and turning off home lights from their office, so they are now more comfortable with similar technology on boats.

“For 10 years, we’ve been making a case to OEMs that they should build connected boats,” Harper says. “Because the boatbuilders weren’t there yet, we were always a consumer-facing company. But the tide really turned in the boatbuilding industry about a year ago. Boatbuilders are now not only taking our calls, they’re calling us.”

Increasing demand for connectivity is prompting more companies to pursue telematics. Nauti-Tech has focused on this type of connectivity for 20 years in the superyacht segment, says president Jack Brunier. The company gathers information from vessels in various layers, then transmits it to a cloud server that records the data to extract information from it.

“It’s not a typical alarm system,” Brunier says. “It does that also. It tells you if the boat has moved or if there’s a fire, but it’s not the goal of that system. The goal is to extract and assemble information on a long­er timeline.”

For example, if a port engine temperature rises slightly over a period of time but has no changes to load, the system might alert the crew to check the cooling system. “All equipment has a healthy vibration curve, and as soon as this vibration curve changes even slightly, we know there’s a problem,” Brunier says. “It makes a lot of sense for any boat, but the problem is the cost of equipment, and the cost of treatment of information is so high that it’s reserved for a higher segment of customers. All that can and will go down with the advent of technology.”

That change should drive down the cost of equipment because consumer demand will be for tens of thousands of products, rather than thousands. “One day, all these systems will be integrated inside the chart plotter, so there will be no need for a customer to buy new equipment,” Brunier says.

Today that type of integration is challenging for a number of reasons — one being that not all customers want to pay the monthly data fee, says Garmin sales and marketing director Dave Dunn. He predicts that a solution will become available in “black-box form” in the near future.

“It’s not just security; it’s telematics,” Dunn says, adding that security companies will evolve “as telematics become more prevalent. It’s an emerging market. It’s going to be a big topic for the next five years and probably beyond, but it will be a standard eventually.”