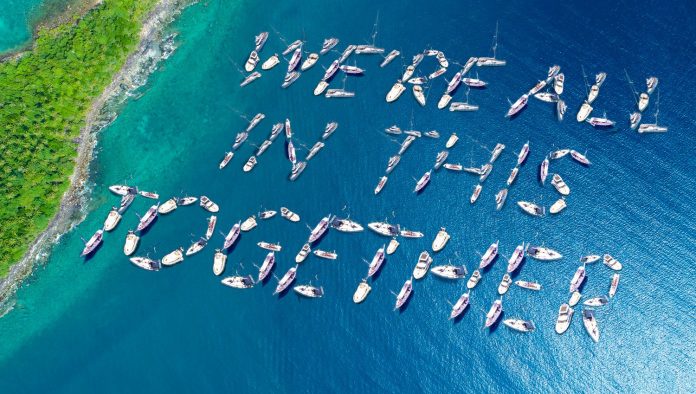 MALIBU, CA—Many described the scene as breathtaking or awe-inspiring. Others were so touched they couldn’t find the words to communicate how they felt. Most simply wept.

No matter how they expressed their emotions, everyone agreed that the scene off the Malibu coast Monday morning was exactly what America needed to get through this pandemic. Celebrities gathered their multi-million-dollar yachts on the waters of the Pacific Ocean and spelled out “WE’RE ALL IN THIS TOGETHER.”

“We’re just like you,” said Ellen DeGeneres on her Instagram as her servants sailed her yacht into position to form the apostrophe. “Yes, maybe I have a yacht and you’ve only ever been on the Storybook Canal boats at Disneyland, but still. It’s pretty much the same thing.”

“Stay home, save lives — it’s not that hard,” said Patton Oswalt, whose fleet of yachts made up several of the letters. “Look, poor people, it’s not worth risking your life just to go to Fuddruckers or work a job or whatever it is you peasants do all day.”

After the stunt was over, Oswalt had his chauffeur drive him home in his hot tub limousine as he snorted several million dollars’ worth of powdered caviar.

“All of humanity is fighting this together and we’re all as one,” said Lady Gaga, who was wearing a bathing suit made out of gold bricks. “Though, I mean, don’t try to get on my yacht. My guards will literally shoot you. That’s not a metaphor.”

Facebook
Twitter
Pinterest
WhatsApp
Previous article
325-Foot Expedition Yacht That Will Break Through Ice Packs in Lavish Style. Meet Frontier!
Next article
Hundreds of yachts are crowding the waters around the US Virgin Islands as other Caribbean islands close their ports, and it’s creating a trash problem on top of coronavirus fears