HomeSailingDesire to give more speed to our sail, more sustainability
Sailing

Desire to give more speed to our sail, more sustainability 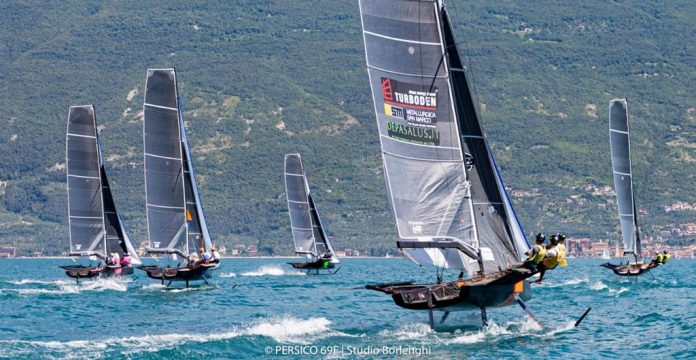 Gargnano, August 7th, 2020 – Which are the ingredients of a (good) revolution? In our opinion they are enthusiasm, new ideas, new needs and new responsibilities. Translated in our language: desire to give more speed to our sail, new technology, more sustainability.

From theory to practice: The Revolution starts on Friday with 16 teams Under 25 on water, table formula, 12 races in three days, arbitrage on water, quadrilateral course and international teams and very young people. This week, on the line, there’s a lot.

What brings to Gargnano, on the Lombardy side of Lake Garda, 16 Under 25 teams from Italy, Hong Kong, Denmark and even two from Holland,? Definitely the desire to have fun and fly on water, the need to race after the lockdown, but also the ambition to look over, in particular to Youth America’s Cup, by appointment early in 2021 in New Zealand.

In fact, some teams are already registered at Youth America’s Cup and they have chosen Persico 69F as hull for practice in view of this event. It’s for this reason that they have come all the way from Holland, Hong Kong and Denmark – and, had it not been for the restrictions due to Covid-19, there would have been a crew from Argentina, as well – and it’s for this that also in Italy teams are preparing with the goal of New Zealand 2021. If that’s not enough, there’s also the pride factor.

We call it this way, and it’s translated with a picture of the gps when speed exceeds 30 knots, with the fun of “surpassing the buoy”. Yes, surpassing, because here speeds are such that terms of circuits seem more appropriate, and this is also a revolution, in the constant search of sailing world to increase their audience, to bring people who love sports where speed and ability make the difference.

Anyway: the program is intense and a full immersion. Three days of training, from Friday 7th to Sunday 9th, and three days of competitions for a total of 12 races. It begins on Monday, August the 10th with “Round A”: the 16 teams will be divided in four flight of four teams each, in every Run there’s a race for four teams, the best two continue in the upper part of the table, the third and the fourth will have to commit to go up from the lower part, but they will be reachable and arrive to the finals.

“The goal of this event – explains Giorgio Benussi, CCO of the 69F Sailing project- is to give a new rhythm, allow to young people to approach the foiling world, define a new way of race. We have 48 boys and girls, born between 1995 and 2002: they’re enthusiastic, fast, capable, ambitious. Our job is to make them have fun in a context of respect of the environment, make them important, give them the possibility to carry on the skills they have acquired on the boat”.