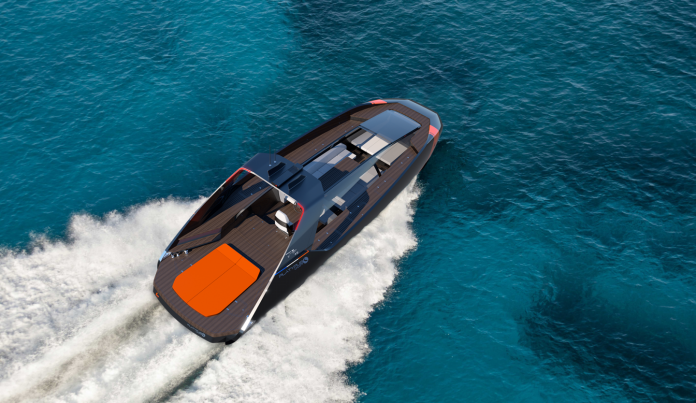 More than 10 years ago, François-Alexandre Bertrand came up with a concept for a novel above/below watercraft that he naturally named the Platypus. The first Blue Ocean edition was sold last year and now his company has launched a new version, the Platypus Swordfish.

The Swordfish is a 40-ft (12.1-m) recreational tender with the unique ability to let passengers travel above or below the water. Unlike the original Platypus design that we got to try out in St Tropez in 2016, the pod that’s submerged beneath the waves by hydraulic arms is enclosed – so the pilot and up to seven passengers can sit back and enjoy the marine environment in comfort, without even getting wet.

Occupants will have air pumped into the pod so they won’t have to wear face masks, the see-through plexiglass cockpit can be opened up on sunny days, and is closed off for shelter up top and, obviously, below-surface travel.

The Swordfish will be available in pure electric or hybrid flavors. The former is equipped with two 500-kW motors and 400-Wh batteries, and offers a top speed of around 40 knots, a cruising speed of 18 knots and a range at a steady 7 knots of 115 nautical miles per charge.

The hybrid version sports two inboard V8 petrol engines producing 900 horsepower each and two 80-kW electric motors. This model offers a top speed of 50 knots, a much longer range than the pure electric but benefits from quiet underwater navigation thanks to the craft’s electric motors.

The trimaran architecture is said to be unusual for a craft of this size, with the sandwich-structure hulls having a wooden core. A smooth trip is promised, with an “almost complete lack of roll and an exceptional wave breaker capacity.”

The watercraft has been designed by L2 Concepts for a look that’s meant to bring to mind a 1970s Citroen SM coupe or stealth aircraft, depending on the viewing angle. The Factory Unit shipyard, which is a subsidiary of L2, will be responsible for building the Swordfish.

And that’s about all we can tell you at this stage. Whether there will be a surface camera system installed to aid underwater navigation, what system will be employed to provide air to occupants, details on safety systems and so on are all unknowns. We’ll bring you more as the project develops.

The Platypus/L2 partnership expects production to start in early 2021, in time for a world premiere at next year’s Monaco Yacht Show. Expressions of interest have already been shown from folks in the US and the Gulf.