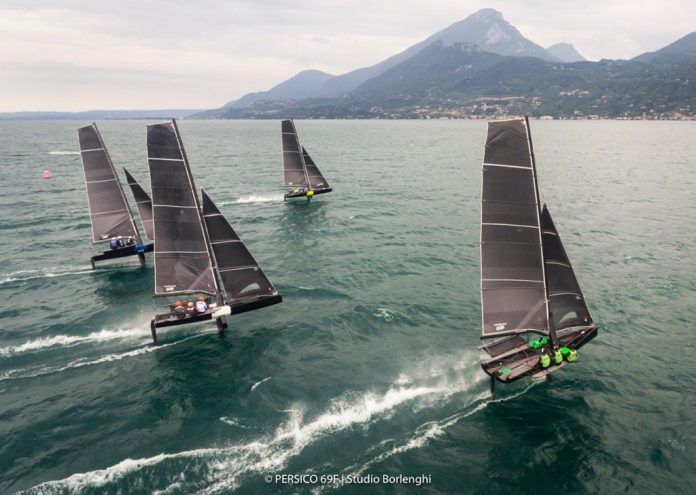 Six international teams, big names, and young contestants.  This is the second seasonal event of Persico 69F: in Malcesine start tomorrow the races of ITAS Assicurazioni Grand Prix 2.1 in the Foiling Week.

YOUNG BUT FAVORED – On paper, there are two teams Under 25 that are favored.  Royal Hong Kong Yacht Club Team Agiplast and the Dutch Kingdom Team Netherlands, in fact, have very young teams but also very experienced thanks to the biggest amount of hours spent racing on Persico 69F. The two young teams, in fact, raced and trained between July and August and today their knowledge of the boat is high, also the desire to show the role of young people in these boats and in this circuit. Soon they will be ready for the honorary citizen of Lake Garda, due to the hours spent on water in Gargnano and Malcesine, will face the Grand Prix 2.1 determined.

DOUBLE SWITZERLAND – Two swiss teams in this stage of the circuit. The first, called Société Nautique de Genève, will have on water Victor Casas, Matthieu Ravussin, and Nelson Mattraux. The second one, in addition to the Swiss Richard Davis and Christopher Rast, will have an expert sailor of international foil circuits, the English Will Alloway.

RETURN TO RACE FOR CELON – In the Grand Prix 1 it was love at first sight: Nicola Celon has tried the races with Persico 69F and he immediately said that he would have liked to come back. And this happened and he involved one of his shipowners, Lanfranco Cirillo who with his Fantastica has been the protagonist of monotypes circuits for many years and now he’s ready to change to foil. Team Fantastica will race with two teams, the first with Michele Paoletti at the wheel with Francesco Gabbi and Pietro De Luca, the second one with Nicola Celon, Lorenzo Franceschini and Simone Salvà. It will be a race between them at home, other than the supremacy of stage.

“After the first Grand Prix of July in Gargnano and the double Revolution in August, in which the Persico 69F were the absolute protagonists of an innovative race format that monopolized the attention of the European sail – says Giorgio Benussi, 69F Chief Commercial Officer – now we’re ready for the second Grand Prix and, for the first time, we will have with a stage sponsor, ITAS Assicurazioni, that shows how the Persico 69F circuit is evolving, growing in visibility and role. Also in this stage, there will be many stories to tell”.

The event will be in 69F’s home, the Circolo Fraglia Vela Malcesine, alongside the Foiling Week.