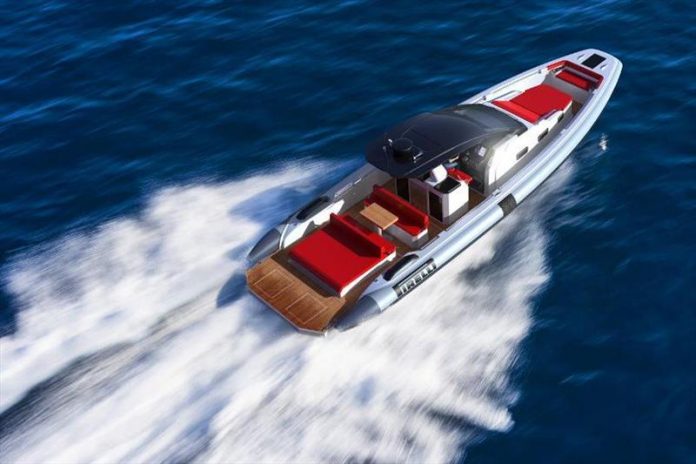 TecnoRib chooses the 60th Genoa Boat Show for the water debut of the Pirelli 42, the walkaround launched at the beginning of the year that’s enjoying worldwide success.

The Boat Show will also represent an opportunity to present to the public the new project Pirelli 35, the brand-new walkaround of the new line unveiled at Boot in Dusseldorf last January. At the same time, TecnoRib announces its new partnership with the Spanish distributor Viudes Yachts.

The Pirelli 42 makes its water debut, a 13-meter walkaround with an aggressive look that represents a perfect combination of sporty styling, comfort and design and has enjoyed huge interest since its world premiere at the last edition of Boot in Düsseldorf.

The Genoa boat show takes place from October 1 to 6, and on stand E853 and YE85A, TecnoRib, licensee of trademark Pirelli for speedboats, will be offering visitors the first-ever opportunity to conduct adrenaline-filled sea trials of its latest model.

Designed in partnership with the Swedish studio Mannerfelt Design Team, which boasts many years of experience creating competition hulls, the Pirelli 42 is designed for both daily use, medium-range cruises and as a shadow boat. Available with different engines including an outboard version, the model on display will be an in-outboard version, equipped for the occasion with two powerful 400 hp Volvo Penta Diesel engines.

Another new TecnoRib model being displayed for the first time ever will be the scale model of the new Pirelli 35. This is a smaller vessel than the Pirelli 42 but with the same features of a sporty walkaround such as rugged, aerodynamic lines and the same modern look designed by Mannerfelt Design Team. Building on the success of its larger cousin, Pirelli 35 is designed to appeal to a large range of clientele seeking to combine the many on-board accessories and modern design with outstanding performance and stability on the water ensured by the double-stepped hull.

In addition to the Pirelli 42, TecnoRib will also have the Pirelli 1400 Sport on display that with the double-stepped hull designed by Ocke Mannerfelt Design offers a maximum speed over 50 knots. This model has sleek and aggressive lines and huge exterior spaces on top of a welcoming below with galley and sleeping area.

The Genoa Boat Show will also be an opportunity for TecnoRib to make an important announcement: during the same dates of the Genoa Boat Show, interested customers will also be able to try out the Pirelli 42 in Barcelona, courtesy of the agreement just signed with Viudes Yachts, the new dealer for TecnoRib speedboats in Spain. A historic name in the boating world, Viudes Yachts is based in Port Vell Marina in the Catalan city and boasts over 50 years in business. Today, this shipyard is a leading name in the sector and collaborates with the world’s main shipbuilders, such as Sanlorenzo, Baglietto, Admiral, Overmarine and many others.

Pedro Millet, CEO of Viudes Yachts stated: “We have been looking for so long for a product that could complement our business and we have found in Tecnorib an exclusive boat that goes beyond our expectations. We are very excited about this new collaboration.”

The newest RIB produced by TecnoRib, official licensee for Pirelli-branded inflatable boats, is a walkaround with aggressive styling and refined detailing. The emphasis is on open spaces, from the surprising day area to the sofa in the bow, with a broad range of engine options available.

The Pirelli 42, which made its debut at boot Düsseldorf 2020, has been designed jointly with Swedish firm Mannerfelt Design Team and will be used either as a shadow boat or a day cruiser.

The first in a new range, it will soon be joined by the Pirelli 52, a larger model that will share the same style and high performance.

A walkaround with a strong personality, Pirelli 42 interprets the evolving style and philosophy of the maxi ribs built by the Milan-based shipyard and represents a new step forward in the creative process that began with the Pirelli 1400.

Given its world debut at boot di Düsseldorf 2020, it is 13.1 meters long, with a beam of 4.10 meters, and has been designed and built to offer an onboard lifestyle that puts the accent on relaxation and comfort. That is why it is fitted with forward and aft sunpads, a day area with an outdoor table and, finally, an underdeck area with a transformable dinette and bathroom.

Pirelli 42, which will be fitted out to meet the owner’s needs, can accommodate numerous guests in total comfort.

Featuring a combination of sportiness, comfort and a design developed jointly with Mannerfelt Design Team, the celebrated Swedish firm with a long track record in competition craft too. Pirelli 42 has been created both for everyday use as a mid-range cruiser or as a shadow boat. Ted Mannerfelt, CEO and Design Director of the studio of the same name, made this comment about his contribution: “My team and I have worked to meet the Pirelli design approach and to make this boat stand out, enriching its sporty spirit with clean, elegant lines. We also had a special focus on the areas set aside for relaxation. The boat is easy to drive and can deliver remarkable performance”.

Pirelli 42 is the first model in a new range targeted at owners in search of the perfect balance between elegance and adrenaline, and the shipyard will soon be launching a larger version too, the Pirelli 52.

Diesel and petrol engines with a range of power ratings can be installed, up to a maximum 900 hp.