Jérémie Beyou (Charal) is heading back to Les Sables d’Olonne 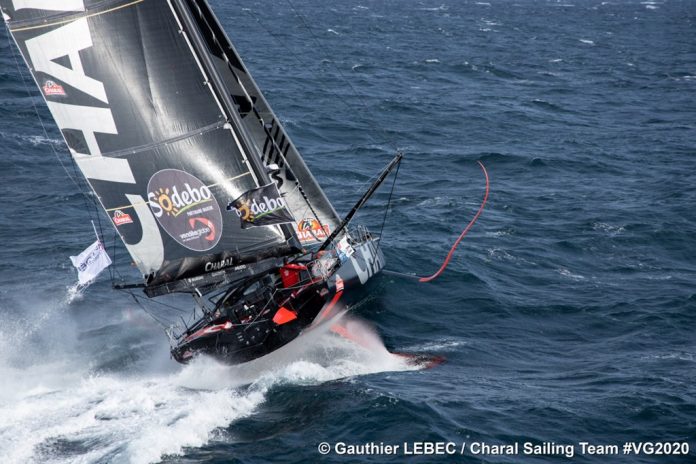 Jérémie Beyou, one of the Vendée Globe solo round the world race’s pre-race favourites has been forced to turn back to the start port of Les Sables d’Olonne in France after suffering a succession of problems including rudder damage and a broken backstay after three days of racing.

Beyou is more than 600 nautical miles from the French port where the solo, non-stop round the world race started last Sunday afternoon. He is expected back in Les Sables d’Olonne late on Friday. The race rules leave the start line open for ten days since the start, so until Wednesday 18th November at 1420hrs.

A few minutes later the team manager confirmed the solo skipper Jérémie Beyou had made the tough decision to turn around towards Les Sables d’Olonne.

Beyou, 44, third on the last edition of the Vendée Globe, was widely considered among the favourites to win, not least a key rival for British skipper Alex Thomson.

The French solo racer, launched his boat earliest of the newest generation of foiling IMOCA 60s and most recently confirmed his favourite status when he won the Vendée Arctique Les Sables warm up course in June.

The Charal team issued the following statement: “After an ideal start to the Vendée Globe being in the leading pack after two days of racing, Jérémie Beyou suffered problems on Tuesday afternoon.”

Technical Director of the Charal Sailing Team, Pierre-François Dargnies details: “It started around 2pm on Tuesday when a sheet block tore off, which sprayed carbon all over the cockpit. Jérémie had to do a little repair, he got in the boat to get it all set up, and while he was inside the boat he hit something. In so doing the boat gybed it ended up on the other side. He then realized that the starboard rudder was damaged. He decided to wait for the passage of the front in last night to start the repairs on the rudder. He tacked this morning while waiting for the sunrise to be able to tackle this repair, but after a few hours later the starboard backstay (cable that supports the mast from the rear) broke suddenly, probably because the sheet block is quite close, beside  backstay and the carbon shards must have sheared it.”

After discussions with his team Beyou therefore took the decision this Wednesday morning to return to Les Sables d’Olonne to repair as quickly as possible: “With a torn off sheet block base, a damaged rudder, knowing that it is possible that the foil might also have been hit, and a broken runner-uphaul that is quite a bit for the third day of the race”, adds Pierre-François Dargnies who has put in place the logistics necessary to receive the IMOCA Charal, expected back in Les Sables d ‘Olonne Friday at the end of the day.

“The ETA will depend on the speed and routing as long as he is on the port tack, as is currently the case he can go at more or normal speed, but on the starboard side, since he has no backstay he will have to go quite slowly. The good thing is that it is mostly downwind. As for the repairs, we have a spare rudder, so that’s not a problem, and for the rest, everything will depend on the exact extent of the damage, we will obviously do everything to repair the boat in the best possible way, meet the deadlines to allow our skipper to leave ”.

After the first big weather system of the race last night, today the Vendée Globe leaders are making good speeds on a south westerly course 450 miles offshore of the Iberian peninsula. Brutal gusts of more than 45kts and big seas proved especially challenging but seem to have caused on minor damages to the fleet. After a split which saw the slower, daggerboard boats largely stay to the south closer to the NW corner of Spain on a more prudent option while the faster foiling boats punched west through the system, the main packs are now aligned with Maxime Sorel (V and B Mayenne) still holding a narrow lead.

But the quicker foiling boats are starting to make inroads up the rankings, Charlie Dalin (Apivia) is up to fourth at just under 12 miles from the leader having gained 16 miles on Sorel today. Thomas Ruyant (LinkedOut) is furthest to the west and lies fourth. The tight group of new generation foilers are hunting as a pack, Alex Thomson’s HUGO BOSS at 2.7 miles behind Dalin.

Kevin Escoffier (PRB) has largely recovered from a sudden ingress of water overnight which came from a damaged valve on the outflow from the foil box housing. And Armel Tripon who it seemed this morning was set to take his L’Occitane to the north Spanish coast after a halyard lock hook failed and dropped his J3 to the deck suddenly causing some unspecified damage. He has resumed a southerly course on the scow bowed Sam Manuard design making 10 kts but dropped to 32nd 160 miles behind the leaders.

And on Tuesday evening at 2315hrs local time Fabrice Amedeo (Newrest Art et Fenêtres) restarted at the Nouch bouy off Les Sables d’Olonne. After returning to Les Sables d’Olonne on Monday morning he had to make a repair to a hairline crack at the top of his mast. Amedeo was touched by the local support who left their homes to send him on his way on the banks of the famous Les Sables d’Olonne channel.