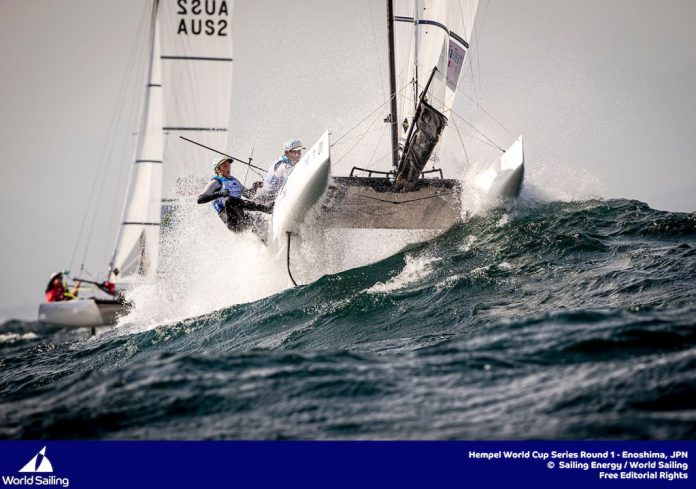 Following the postponement of the Tokyo 2020 Olympic Games to 2021, World Sailing has released the Notice of Race for the Olympic Sailing Competition.
The competition will run out of Enoshima Yacht Harbour in Japan and will commence on 25 July with the concluding Medal Race on 4 August.

The Notice of Race states the key conditions for the 10 sailing events at the Tokyo 2020 Olympic Games.

The Men’s 470, Women’s 470, Laser, Laser Radial and Finn fleets will sail ten races as part of their opening series with a concluding Medal Race. Twelve races will be held for the 49er, 49erFX, Nacra 17, Men’s RS:X and Women’s RS:X fleets ahead of their Medal Races.

Included within the Notice of Race are details on the rules, regulations, entry and qualification guidelines, format, scoring, schedule, venue and courses.

Athletes, coaches, trainers and other team officials shall comply with the Olympic Charter, as well as with the World Sailing rules, in order to be eligible for participation in the Tokyo 2020 Olympic Sailing competition, and shall be entered by a National Olympic Committee (NOC).

The Tokyo 2020 Olympic Sailing Competition will take place at the Enoshima Yacht Harbour, Enoshima, Japan and will feature 350 athletes competing across ten events.

Racing is scheduled to take place from 25 July to 4 August 2020 and the competition format for all events is fleet racing.