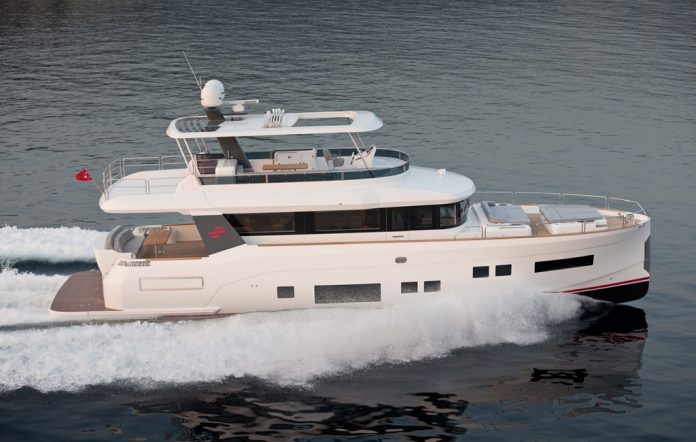 After presenting the very first Sirena 64 at the Dusseldorf Boat Show in 2017, the Turkish shipyard has sold its 60th yacht
– Sirena Yachts announces LEX Ocean as new Croatian dealer
– The brand has introduced also a series of design upgrades and technical tweaks to the Sirena 58 and Sirena 64

“I don’t know of another young shipyard that has sold 60 yachts in just three years!” exclaims Ali Onger, COO of Sirena Marine. “The yacht in question is our 6th Sirena 88, which will be delivered towards the end of next year. Like the second unit, the owner is from the US and the Americas is our most important market accounting for around 60% of sales, followed by 40% in Europe and the rest in Turkey. We have sold all the slots for the Sirena 88 until early 2022.”

Sirena recently launched the second 88, while the third hull will splash early in the New Year and hulls 4 and 5 will launch before the 2021 summer season. Moreover, a combined total of 18 units of the Sirena 58 and 64 are in production, of which 10 are pre-sold for delivery in 2021.

“We are a production boat shipyard and never stop building, rather like a car assem-bly line,” says Onger. “But we also customise every yacht as much as possible to suit individual client requests. Once a boat is signed for and the interior layout and décor is decided it takes around 10 months to finish. Of the multiple yachts we complete each year, no two are exactly the same.”

NEW CROATIAN DEALER
Sirena has also announced a new representative in Croatia. LEX Ocean located in Marina Punat on KrK island, the oldest marina in Croatia, joins Sirena’s interna-tional network of dealers from the US to Australia.

“We had been looking for a reputable dealer to represent us in the Adriatic for some time,” says Onger. “Because Croatia is a very popular charter destination and a favor-ite cruising ground for our North European owners, it’s important from a sales per-spective but also to be able to service our existing clients, so we needed a company that could do both. The location of LEX Ocean is perfect because Marina Punat offers a wide range of services and has won a number of significant awards. I’m sure we can look forward to a very productive and efficient business relationship.”

SIRENA 58 AND 64: A SERIES OF DESIGN UPDATES
Following up on the commercial success of the Sirena, the brand has introduced also a series of design upgrades and technical tweaks to the Sirena 58 and Sirena 64.

“We’re always listening to our owners and constantly introducing improvements to our products based on their feedback,” says Constantinos Constantinou, head of op-erations for Sirena in North America. “Some of these upgrades may seem unim-portant, but they are all designed to make the cruising experience safer, more com-fortable and ultimately more rewarding.”

A prime example is the wider staircase with larger treads leading down to the ac-commodation deck that improves both comfort and safety on the Sirena 58.

Another is the fully redesigned master bathroom featuring a rectangular shower stall that is almost 50% more spacious than the previous circular-style shower.

In order to keep abreast of current trends in interior design, a new range of interior decor packages are also available.

Another enhancement has been introduced on the flybridge with an entirely new helm console and dashboard featuring improved ergonomics and aesthetics, and a pair of ergonomic marine seats by STIDD that replace the previous bench seating.

In addition to Seakeeper gyro stabilizers with Zipwake interceptors, Sirena is now of-fering the option of zero-speed Humphree fins and Humphree interceptors.

“The advantage is that the Humphree fins and interceptors ‘talk’ to each other in a ful-ly integrated system to control both roll and trim,” says Constantinou. “We introduced the fin integrated system option at the request of Sirena owners who voyage for long-er distances at higher cruising speeds.”

A revised galley layout is also available with more countertop area and storage space with deeper drawers and closets. The principle improvement here is that a new countertop has been introduced between the galley and the helm station and the space underneath the helm seat is used for extra storage that is accessible from the galley.

In addition to the new palette of interior materials and finishes across the Sirena range, the 3-cabin version of the Sirena 64 now comes with a second additional walk-in wardrobe in the full-beam master suite, which already had an abundance of garment storage space.

“Based on the request of a specific live-aboard owner, we developed an arrangement with an extra wardrobe where the fourth cabin would be,” says Constantinou. “It’s an-other example of how we listen to our customers and aim to offer them a higher level of personalization, which is what Sirena is all about at the end of the day.”