The 9th Edition of the Vendée Globe Returns Some Exceptional Numbers 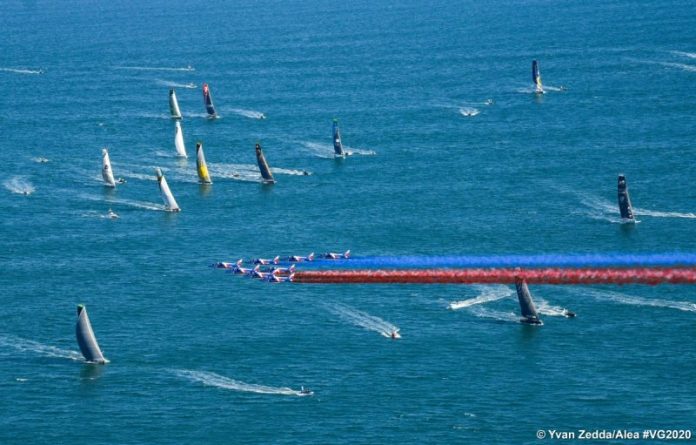 After 30 days of racing a press conference was held this afternoon in the Vendée Globe village, in the presence of Yves Auvinet who is President of the Vendée Globe and the Vendée Department, Lionel Pariset, who is the elected Vendée Globe delegate for the town of Les Sables d’Olonne and Jacques Caraës, the Race Director.

“For the first time in its history, the organization of the Vendée Globe had to face the challenge of a global health crisis. This unprecedented context forced all those involved in the event – organizers, sailors, teams, the public – to adapt so that the start would be given for the 33 competitors ready take on the round-the-world solo, non-stop, without assistance race. Despite these difficulties, the challenge has been met. After a month of racing the review is really excellent”, declared Yves Auvinet.

Today, almost one in two French people (49%) intend to follow the race according to the latest ODOXA – RTL – WINAMAX Barometer: it is better than the Tour de France cycling or Roland Garros!

In France the live broadcast was transmitted by 13 broadcasters (vs 10 in 2016) with more than 4.1 million viewers in total watching the start (23% of cumulative audience share), notably on L’Equipe TV, France 3, BFM, and LCI.

Internationally, the race made a big breakthrough with 28 broadcasters (vs. 21 in 2016), notably in Great Britain, Switzerland, Spain, Germany and Japan.

Media coverage has grown significantly: With 192 million contacts generated, the media coverage of the start of the Vendée Globe is equivalent to a purchase of space representing 13.9 million euros with 16,239 articles published.

Digital media was also heavily used at the start with 1.39 million sessions and 5.48 million page views on the website. What is even more striking is that after 1 month of racing numbers are not dropping.

After 1 month of racing: interest in the Vendée Globe continues to grow!

The website, the app (application), social networks and digital platforms are generating much higher traffic than in 2016.

The free e-ticketing system enabled the Vendée Globe to reconcile the health and safety rules with the enthusiasm of the visitors. Between 17th October and 29th October, within the limits set by the health authorities, the village saw 15,000 visitors a day, remembering that only 5000 people were allowed at one time in the Village. In all, 200,000 people visited the Village.

As for the origin of the visitors, 2/3 of them came from the Pays de la Loire Region, with just over 40% of them from Vendée, with 1/3 from the rest of France and 1% from abroad.

The success of the virtual race confirms the penetration of the Vendée Globe into homes in France and abroad. 975,000 gamers registered, which is twice as many as four years ago (456,712 gamers in 2016).

The virtual race attracts people from outside of France with almost 20% in foreign countries representing 150 different nationalities, with in particular, people from the United States, Switzerland, the UK and Spain.

Finally, it has been an unprecedented success amongst schoolchildren: 4354 classes are taking part in the Virtual Regatta Academy rankings, which is almost three times as many as in 2016 (1600 classes in 2016).

The Vendée Globe, a genuine educational method for children and teenagers

Developed by the Vendée Department, Vendée Globe Junior offering new fun and educational tools, has been a resounding success. 6000 educational packs have been distributed with an updated website which has new features and this too has been increasingly popular: 2.8 million pages viewed, which is an increase of 373 % in comparison to 2016; 220,000 visitors, or on average 6000 visitors a day.

The race itself: Jacques Caraës, the Race Director, carries out a full appraisal

The composition of the fleet

In comparison to previous editions, and in particular 2016, the racers, in spite of COVID restrictions, have sailed more, and certainly more than four years ago. The selection process that was put in place (number of races and number of miles to cover to qualify) required the competitors to take part in races: The Monaco Globe Series, the Route du Rhum, the Bermudes 1000 Race, the Rolex Fastnet, the Transat Jacques Vabre and the Vendée Arctique les Sables d’Olonne. The boats have been well-prepared, even in the smaller teams. There has been a higher standard of preparation. There are also some highly innovative boats, which had not been tested in every set of conditions, such as in heavy seas sailing downwind. This means we will be able to carry out a thorough appraisal at the end of the race. For the new foilers, the Vendée Globe and the Southern Ocean have been a testing ground. In heavy weather, and in cross seas, the well-prepared traditional boats have managed to keep up a pace close to the foilers, as they are unable to use their foils all the time.

In the South, the chosen trajectory is also very important. The more experienced sailors, even in older boats, have managed to keep up the pace in the group of the 5-10 leading the race. In the end, it appears that the ability of the boats seems to be closer together than expected.

So far, the weather has not been easy. In the Southern Ocean, there have been some very active systems. The lows tend to deepen and move very rapidly. This has generated very untidy seas with huge waves. This has been a particularly difficult Vendée Globe. In the Northern Hemisphere they did not find the fast sailing they expected in the trade winds. Only the passage through the Doldrums was quicker than usual.

Out of the 33 at the start, five boats have been forced out with damage. This is a proportion that is not that surprising unfortunately. We need to remember that the average proportion of boats retiring from the Vendée Globe is around 50%. For the moment, this has chiefly concerned the newer boats.

The gaps and race times

The gaps will perhaps be wider than in previous editions. The leaders are only in the middle of the Indian Ocean. When they enter the Pacific, the gaps will widen, which is hardly surprising. If we compare the oldest boats with the latest generation ones, the differences in speeds are huge, with some achieving almost double the speed of others.

It is always tricky to talk about a record in the Vendée Globe, as in a race like this one, you do not get to choose your weather opportunities and this means conditions have a major influence on performance. The boats can clearly perform better, but they may not improve on the reference time of 74 days (set by Armel Le Cléac’h, the winner of the last edition). It is still too early to make any predictions.