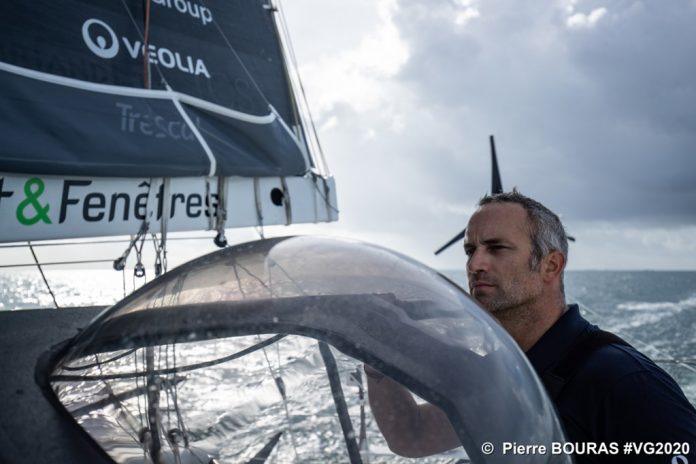 Leader Charlie Dalin has seen his margin more than halved in the last 36 hours as he negotiates a high pressure zone of lighter airs some 630 nautical miles west of the longitude of Australia’s Cape Leeuwin.

The perils of being first to break into gentler winds are obvious as he sees the chasing duo have closed up to within 100-120 nautical miles of him, albeit partly as he repositioned himself further to the south. But while some have been questioning if Dalin is hiding damage which might account for his slower speeds the 35 year old who originates from Le Havre has been sailing into the lightest wind of any of the top 15 boats.

“Charlie is facing an area of lighter winds for a few hours, those chasing after him are sailing in 15-25 knot SW’ly winds, offering them high speeds and allowing them to narrow the gap. The first fourteen boats from Apivia to L’Occitane en Provence (Armel Tripon) are today sailing in the same weather system with the Mascarene High stretching out across the whole of the Indian Ocean.” Noted weather supplier Christian Dumard this morning at his briefing to Vendée Globe HQ.

Vendée Globe veteran Jean Pierre Dick said today on the French Vendée Globe Live, “The leaders do tend to keep quiet about any issues they might have, to not give away anything to those chasing that might give them a chance to use it against them. That has often been the strategy of past leaders such as François Gabart, Armel Le Cléach or Michel Desjoyeux. I think that Charlie Dalin is in this area of light winds.”

Of life in the barren South Jean Pierre recalls, “I have spent nearly 6 months in the Southern Ocean over the course of the racing I have done and what impresses me the most is the sense of vastness and desolation. Over the course of the six months there, I never once saw a boat. The only one was PRB in 2008 when we nearly hit each other. It is so vast, savage and then seeing the albatross is a true honour to be there.”

“Then there is a form of optimism when you know about the climate change, the earth warming up and the pollution, being down there at one in nature and not seeing a living being for that long, you feel that you are in the one part of the world that you breathe, and that the world somehow heals itself from our urban excesses. What strikes me the most when I see the images sent back is the human isolation and the sporting battle one has with oneself. How to stay zen in the face of all the problems you have. It is not always to ensure to have less sail than you might like, as a competitor, but you have to also look ahead when winds change so suddenly from 15 to say 30.” Dick observes.

Dalin continues to play the long game in an assured fashion. He is without doubt measuring the threat from those behind him in the knowledge that his boat, assuming it to be at 100 per cent or close to it, should be the fastest of those in the top 11.

“He will be looking at the threat from behind and knowing that he should be able to be fastest. I think he is very much controlling the fleet knowing he can match them if he is at his best.” Notes four times Vendée Globe racer Mike Golding this afternoon, “That said we are still not seeing the averages we should have been seeing from these foiling boats and I wonder whether everyone is being generally quite cautious. For Charlie his biggest worry would maybe be in the South Atlantic climbing north again and that threat might come from Yannick Bestaven who is going well and Louis Burton who continues to impress me. But that is a long way off. There are some very good sailors in this group. But in terms of speeds so often it is down to the wave patterns. In the 2012 race in the Indian Ocean it was like this, there was never just the time to get the boat really rumbling for long periods.”

It has been a key moment of the race so far for Japanese skipper Kojiro Shiraishi who crossed the longitude of Cape of Good Hope at 1053hrs this morning on DMG MORI. After having to retire into Cape Town with a broken topmast in 2016, Shiraishi was has passed his stopping point and was going well today, crossing just four hours and 24 minutes after Briton Miranda Merron (Campagne de France) who passed just 37 minutes after Alexia Barrier (TSE 4 My Planet).

Suffering from a breakdown of his backup computer – his first, main computer failed off Cape Finisterre – Fabrice Amedeo confirmed he will abandon his Vendée Globe in Cape Town. This afternoon he had just over 130 miles to sail to the South African haven. Journalist turned round the world racer Amedeo finished 11th on the 2016-17 race but had to restart two days after the start due to a hairline crack at the top of his mast.