No Monday morning blues down under as leaders press hard 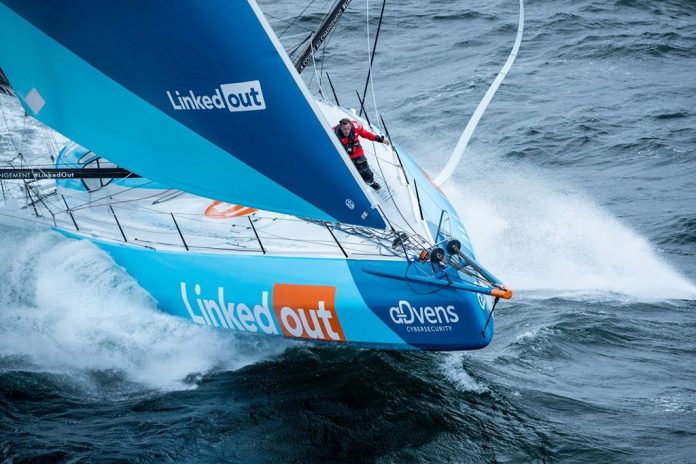 The three Vendée Globe leaders have the foot hard down on the accelerator, racing behind this low pressure system and so making good speeds and opening up the gap back to the chasing peloton which is now more than 200 miles behind. Charlie Dalin is doing his best to contain the highly motivated Thomas Ruyant who works constantly to find best speeds from his compromised IMOCA which lacks most of its port foil and Yannick Bestaven remains super quick. And now seven IMOCA’s have crossed the longitude of Cape Leeuwin, young Ben Dutreux – the rookie from the Vendée region – is very happy to have crossed fourth.

“It’s amazing, I’m super happy to have passed the longitude of Cape Leeuwin and to be where I am. I have to say that I am on it all the time, trimming, pushing all the time, working at the chart table. I had been struggling to rest fully lately, I couldn’t let go, I got a little stressed when the boat was slower. ”  revealed the skipper of OMIA – Water Family on the 0400hrs call this morning. The young alumni of the La Solitaire du Figaro and the Tour Voile who is succeeding on a modest budget on his 2007 Farr design. Up with the main posse he racing alongside Jean Le Cam and Damien Seguin. All three are within 20 miles of each other after 36 days of racing.

“The first three will extend tonight we will be overtaken by the high pressure. You have to be fast all the time in this company and not hang around too much, ”added the Vendée skipper.

Monday in the Indian Ocean down under Australia looks industrious but profitable. Thomas Ruyant is satisfied to just keep up the pace and stay with leader Dalin who is 55 miles ahead.

“I have found solutions to deal with the lack of my port foil I play with the ballast a lot, I trim and push hard I add sail area when I can. I’ve had my share of struggles and now I am loving being in the south Seas “.

Pressing hard, one hand close to the pedestal winch ready for the next squall and one eye on the repeaters, the LinkedOut skipper spoke for a long time, his voice clear and cheerful. Ruyant is a happy man who is dreaming of the Pacific Ocean, big surfs and the gybe that will come to allow him to finally sail on his best side, the one with a foil.

Further back Miranda Merron is, like Ruyant, finding something to smile about this Monday morning despite the fog surrounding her. The British sailor has had hydro generator issues but seems confident in her repairs. This morning she sees her Campagne de France slipping along nicely ahead of a depression. She was settling down with a hot Earl Grey tea and a good hot porridge. Jérémie Beyou, meanwhile, has passed another boat and can raise a smile too, Charal working its way through the fleet.

Finally Fabrice Amedeo made landfall last night in Cape Town. He sent  a message as soon as he arrived: “The place is incredible but impossible to enjoy: with this stop at the dock, it’s where my Vendée Globe really comes to a halt and that hit me hard, when I was at sea, I was in the protective cocoon of this parallel world on the open sea. Here I am back on dry land. For now I am concentrating on the list of what I have to do to get the boat back in battle order. “

Miranda Merron said this morning, “ I am fine. I have recovered my sense of humour and good mood after a few days when they had left me, just as conditions are deteriorating, it is foggy and temperatures have dropped significantly so I have been sailing upwind in the Southern Ocean, can you imagine that? Anyway now I am a bit more reaching. Everything is fine. We had a good fight going on but I have been a bit slowed as I have had a bit less wind, being a bit further north compared to them, so less wind and not such a good angle. But I am happier to be further north than the rest of the fleet, that is my personal choice, but it is nice to be quite a few of us around, grouped together because other than us I don’t think there is a great deal of other human life. I am having porridge this morning with golden syrup and a spoonful of chocolate powder in it and a cup of Earl Grey tea which will warm me up.”