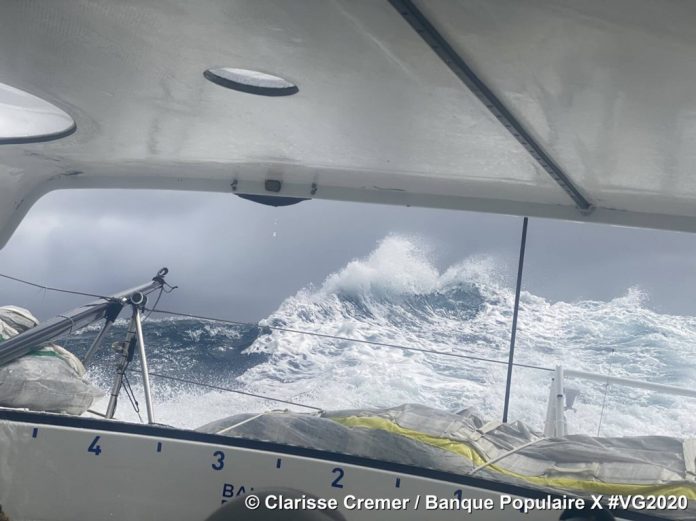 Having been slowed since around 1800hrs UTC yesterday evening to evaluate and then today to make some kind of repair to his port side foil system of APIVIA, Charlie Dalin has dropped to third and lost over 120 miles to his two nearest rivals Thomas Ruyant and Yannick Bestaven. But Dalin, Vendée Globe leader for 23 days up until last night, appears to be back in race mode this afternoon, making over 14kts south eastwards towards the south Pacific Ocean.

Waves as high as a three-storey building and winds gusting to 55kts are expected over a ferocious ten-hour period for Yannick Bestaven and Charlie Dalin as they both seek to double the Horn, the last of the course’s three Great Capes, for the first time.

“A drop for me, a drop for the boat, a drop for Neptune, hoping he might be lenient with us” said second placed Charlie Dalin hopefully very early today, celebrating his arrival into 2021 by sprinkling the cockpit of his yellow hulled IMOCA Apivia with a splash of champagne, after having allowed himself a tiny sip of fizz to celebrate the New Year.

And on the 54th day of racing at 430 miles from Cape Horn, Bestaven and Dalin have made good a very successful but hard-won escape from their nearest challengers. A big jump in the last 48 hours means the duo are now closer to the Cape than the 470 miles – or approximately one day – that now separates Dalin from third placed Thomas Ruyant.

At least this magnitude of a lead should allow them to throttle right back, settle into survival mode, and miss the worst of the malicious low pressure system which should be at its worst during Saturday afternoon.

“It feels like it has been a very long time this South. I’m glad it’ll all be done soon. Cape Horn will be an important passage in my head. If I can get round in 3rd position, that would be great” said LinkedOut skipper Thomas Ruyant from his secure position in the bottom of his boat where he grabbed a small morsel of foie gras.  Leading the chasing posse Ruyant is sailing behind the low, in a freezing SW’ly wind flow that has seen the whole group accelerate this Friday afternoon. And the pace is as unrelenting as ever once more and the distances between boats in this group are tiny. In eighth Isabelle Joschke on MACSF is in sight of Jean Le Cam – less than two miles between the two – while – in terms of distance to the Horn – there is less than a mile between Benjamin Dutreux on OMIA Water Family in fifth and Boris Herrmann on SeaExplorer-Yacht Club de Monaco in sixth.

New Year celebrations tend to be muted. On Medallia Briton Pip Hare catches a few moments for a blast of music and party popper to celebrate New Year arriving for her with the welcome position report showing she has passed Alan Roura to lie in 15th place, her best yet. And her French counterpart Alexia Barrier had time for a jig of happiness having made several key repairs not least her hydrogenerators.

Take Five
To finish any Vendée Globe is a victory in itself. But with this peloton group which is of unprecedented size – 140 miles between fourth and ninth today – and a truly exceptional level of competitiveness within that hard pressing pack, right now every mile, every place won and lost is big boost to morale. Conversely, in the freezing cold, unsettled winds behind the low, it is hard to accept losses and to constantly look only to the long game.

And at this stage all in the top ten or eleven can realistically still harbour hopes of winning, or being on the podium. But what would be the most common measure of success for this group? Podiums speak for themselves and would be the perfect result but probably most of this group left Les Sables d’Olonne with a place in the top five as their realistic target. And right at this point – because it is so tight – there is as much chance of a place in the top five as there is finishing tenth. In this field on this race fifth would be an exceptional result.

But of course just as every Vendée Globe is different so every fifth place is a unique yardstick and the way it looks now the time deltas between third and tenth can be very small.

In 1996 Briton Pete Goss was fifth in 126 days from six finishers in a time of 126 days, 21 days after the winner Christophe Auguin. In 2000 Dominique Wavre was fifth from 15 finishers, 12 days after the winner, the Swiss skipper having an elapsed time of 105 days. Sébastien Josse was fifth in 2004 but missed fourth by nine hours. Thirteen boats finished and his elapsed time was 93 days. Britain’s Sam Davies was fifth from 11 in 2008 but missed fourth by 20 minutes. At 95 days she was 11 days behind Michel Desjoyeaux. In 2012 it was Jean Le Cam who was fifth from 11 finishers taking 88 days for his lap of the planet, 10 days slower than Francois Gabart. But Mike Golding missed fifth by six hours. And in 2016 when there were 19 finishers it was Yann Eliès who was fifth in 80 days, six days after winner Armel Le Cléac’h. And this time, recall that Le Cam missed fifth by 30 minutes.