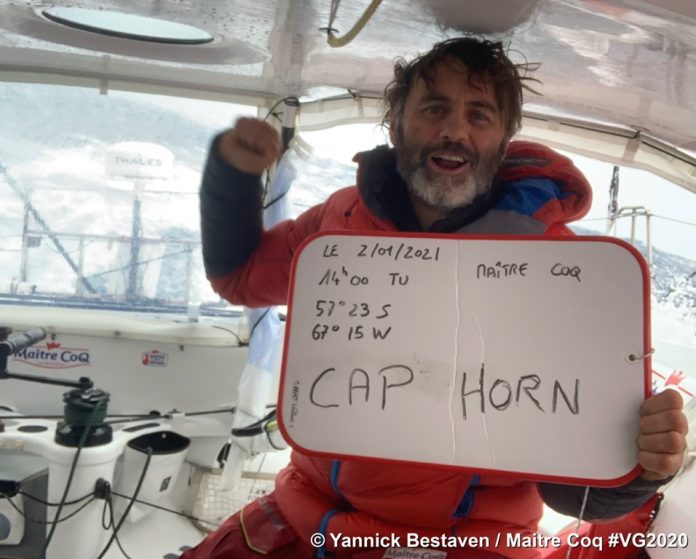 Alone, surfing north eastwards in the grip of stormy winds and seas, passing 85 miles south of the famous solitary rocky islet, the huge whoop of delight from 48 years old Vendée Globe leader Yannick Bestaven when he finally passed Cape Horn this afternoon marked in an instant his victorious end to the relentless Southern Oceans and the start of the 7,000 miles climb homewards to Les Sables d’Olonne.

When Bestaven doubled the mythical lighthouse-  at 13:42hrs UTC this Saturday afternoon 55 days and 22 minutes after the Vendée Globe start on Sunday 8th November, it concluded a remarkably successful first time in the Southern Ocean.

A past winner of the Mini-Transat and twice victorious in the two-handed Transat Jacques Vabre in Class40, Bestaven – who had never raced south of southern Brazil before – has been in the top three of the fleet since the Kerguelen Islands and took the lead just before the longitude of Tasmania. He has consistently sailed fast on his well prepared and reliable 2015 VPLP Verdier design which he has preserved to ensure he starts the Atlantic climb with his boat and set up at 100% of potential or close to it.

As he rounded he was more than 160 miles ahead of second placed Charlie Dalin (Apivia) with third placed Thomas Ruyant about 458 miles, or one day behind Bestaven’s cheers were as much of relief, successful deliverance from a very intense few days racing hard on the front of a low pressure system with his lead and his boat intact. The passage across the Pacific was punctuated by four days around Christmas in very light winds when there seemed to be a chance Bestaven and Dalin might be caught, but Bestaven – who grew up in Arcachon to the south of the French Atlantic coast – sailed impeccably, always pushing hard on fast, direct courses along the Antarctic Exclusion Zone.

And doubtless Bestaven’s huge holler at the third of the course’s three Great Capes further exorcised the ghost of his one and only previous Vendée Globe attempt, when he was dismasted in a brutal Biscay storm only 24 or so hours into the epic 2008 race.

The solo racer is also one of three skippers who remain on course who helped in the search for Kevin Escoffier when he had to abandon PRB on 30th November. And so while his lead over Dalin is 160 miles right now, Bestaven also is another 10 hours and 15 minutes to the good because of the allocation by the International Jury to compensate for his time taken to help in the search.

Bestaven’s passage time since the Les Sables d’Olonne start is more than eight days slower than the 47 days record pace set by Armel Le Cléac’h in 2016 and three days slower than 2012’s 52 days mark by François Gabart and one day and 15 hours faster than Michel Desjoyeaux in 2008.

“I’m stubborn, that’s one of my big faults but also one of my qualities” revealed the marine engineer on the pontoons of Les Sables d’Olonne a few days before the start. “I also am very resilient. And I have a strong mind in difficult conditions “. As he has proven over the last month in the Southern Ocean where he grew in skill and stature.

Bestaven said this morning “I had to believe in my options and in my route without worrying too much about what my competitors could do. I had to be stubborn, especially when I stayed along the ice barrier. But I didn’t think you could go so far into the human body to physically and mentally overcome all the stress, the cold, the damp, the loneliness. There were some magical moments and some very hard ones like when the boat broached and I was on the deck in the middle of the night wondering what the hell I was doing there.”
Dalin – also a first timer – should round Cape Horn in the small hours of Sunday morning. He appears to have slowed more in the big seas and strong winds, making around 15 knots this afternoon when Bestaven seems to have pushed on at 17-19kts at times.

Meantime Briton Pip Hare has been trying to find the best solution to a failed wind wand at the top of the mast of her Medallia. She has only been able to sail on compass mode on her autopilot but this afternoon has been working to find a better solution.