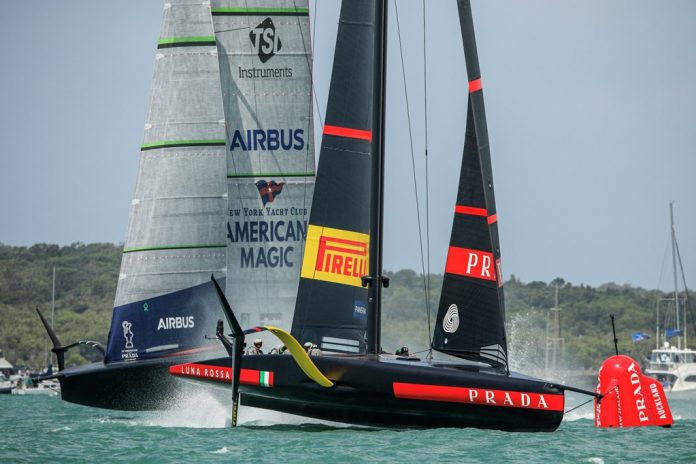 Organised by COR 36, Challenger of Record, the PRADA Cup – the Challenger Selection Series – will be held from January 15 to the end of February 2021: the last day depends on the number of races that will be necessary at the winner to earn seven victories and overwhelm the other challenger.

This crucial event determines which foreign Challenger will take on the Defender Emirates Team New Zealand in the 36th America’s Cup Match in March 2021. True to the established traditions of the America’s Cup since 1970, year of the first “Challenger Elimination Series”, strongly wanted by Baron Marcel Bich and imposed to the New York Yacht Club. From that edition the Challenger Series become an important event in the event.

The three Challengers come from Europe and the States. Each has a strong story to tell: from United Kingdom INEOS TEAM UK brings back on the great show the Royal Yacht Squadron, the club where the “Hundred Guineas Cup” was raced in 1851 under Queen Victoria’s reign and eyes. The skipper is Sir Ben Ainslie, 5 Olympic medals winner, the only in history with four golds in a row. From the United States New York Yacht Club comes back to the Cup with American Magic and Terry Huchtinson as skipper. Luna Rossa Prada Pirelli Team by the Italian passionate “sailor” Patrizio Bertelli is the sixth challenge he runs. The challenge is signed by Circolo della Vela Sicilia and Max Sirena is the skipper.

Challenger of Record, to win the America’s Cup first win the Prada Cup

Live coverage will run for two hours daily, starting at 3pm local tome for the Round Robins and Semi-Final, and then moving to 4pm local for the PRADA Cup Final. The Challenger Selection Series winner will receive the PRADA Cup – a striking new trophy designed by renowned designer Marc Newson and painstakingly
handcrafted by Florentine silversmiths – and become the Challenger for the 36th America’s Cup.